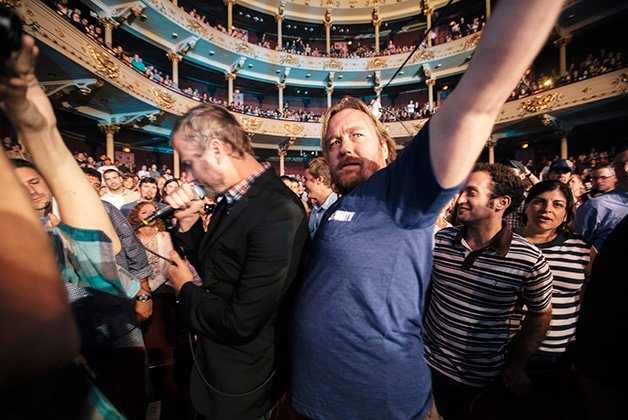 The Nationals Matt Berninger (left) and his brother Tom engage in some sibling rivalry.

In 2010, Matt Berninger – lead singer for the National – offered his brother Tom a crew job on their world tour. An aspiring filmmaker, Tom brought along a video camera and started to make a documentary. The result is Mistaken For Strangers.

The film is less about the National than about the Berninger brothers and their fractured relationship. Matt’s the successful one fronting a popular and well-regarded band, while Tom – who’s nine years younger – is the fuck-up determined to make something of himself even if he doesn’t fully understand how.

Over the course of the tour, Tom interviews Matt and his bandmates, but the questions always seem to be about Tom and why Matt doesn’t respect him as a filmmaker.

I’m not sure I respect Tom as a filmmaker either. Though he’s credited as director and shares editorial credit with producer Carin Besser – who is also Matt’s wife – Mistaken For Strangers has clearly been constructed after the fact by a number of editorial consultants, including executive producer (and two-time Oscar nominee) Marshall Curry.

I don’t point this out to take anything away from the finished doc, which is really clever in its deconstruction of the Berningers’ emotional dynamic. I just have trouble believing that Tom did the deconstructing himself.