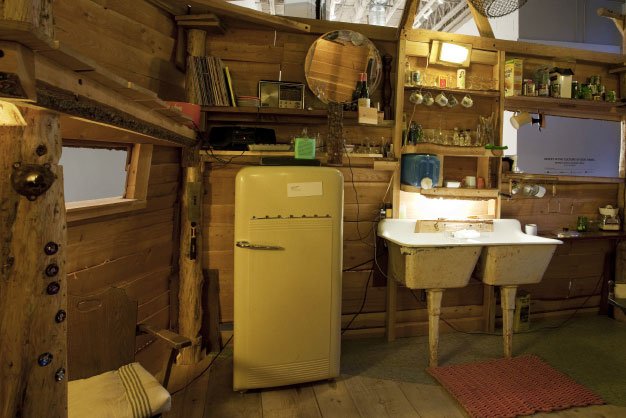 For its farewell to its current location, MOCCA enlists the ever-hospitable Dean Baldwin to transform the museum, which is relocating to the Tower Automotive Building on Sterling, into the Queen West Yacht Club.

The Toronto-born, Montreal-based artist has made a career of equipping galleries with funky, shack-like structures where food and drink are served, recycling elements from one venue to another as he goes along.

His practice may be described as relational aesthetics, but don’t expect a high-minded, theoretical exploration of social relations. Baldwin, appropriately for a closing bash in a soon-to-be-demolished building, focuses on humour and fun.

The QWYC experience begins in the picnic-table-filled courtyard, where water flows over a fountain of wooden piers tied together with ropes into which he’s tucked various kitchen utensils. Inside the entrance, the gift shop offers reasonably priced QWYC beach towels and clunky handmade ceramic beer mugs, perhaps left over from the pottery kiln/pizza oven/beer garden he set up last year for No.9’s Eco-Art-Fest.

Where the gallery entrance once stood, he’s knocked out a wall and erected Chalet (other iterations of which appeared in MASS MoCA’s Oh, Canada show and in Charlottetown), a clubhouse that’s part beachside tiki bar, part cottage boathouse, part ramshackle studio kitchen.

The opened-up gallery space holds one impressive object, Ship In A Bottle (Le Bateau Ivre), previously shown at the 2011 Quebec Triennial. The real wooden sailboat is installed at a rakish angle as if it’s tacking into the wind, its mast scraping the ceiling. It’s also set up as a bar stocked with condiments and dubious-looking preserves that may play a role in concoctions like Baldwin’s famous sardine-garnished Rotten Martini. (Check MOCCA’s website for upcoming artist-run events in the spaces.)

Despite its party-hearty jocularity, the installation makes an intriguing comment on the art world’s odd demographic of yacht-owning millionaires and impoverished, seat-of-the-pants creative types. It also serves as a wake for the Queen West art district as condofication continues to drive galleries out of the area.