Modern take on The Aeneid looks at the plight of refugees

THE AENEID by Olivier Kemeid, translated by Maureen Labonte (Stratford). At the Studio Theatre, Stratford. Runs in rep to September. 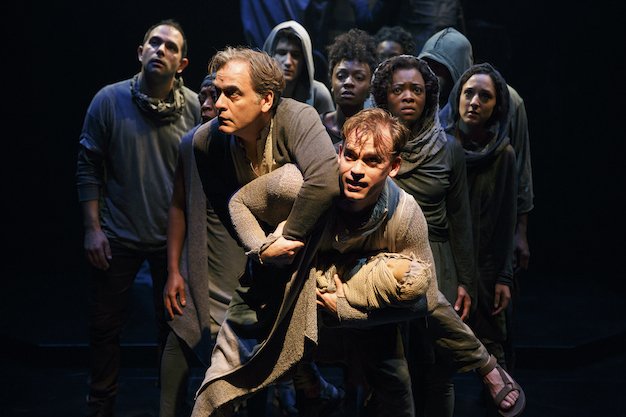 Classic Greek and Roman tales reinterpreted for modern audiences have been trendy this summer, starting with Soulpeppers Father Comes Home From The Wars (Parts I, II, III), with its echoes of the Odyssey.

Here its Virgils Roman epic the Aeneid at least its first half that gets the update in Olivier Kemeids play of the same name, making its English premiere in a translation by Maureen Labonte for the Stratford Festival. An ambitious project, the show succeeds better in its second half.

The original follows the wanderings of heroic Aeneas after the fall of Troy and his eventual settling in Italy, where he becomes the ancestor of the Romans.

Kemeids twist is to make Aeneas (Gareth Potter) a common man fleeing the military destruction of his unnamed city his companions include his infant son, Ascanius, his father, Anchises (Michael Spencer-Davis), and two women (Karen Robinson and Bahareh Yaraghi). His wife, Creusa (the powerful Monice Peter), dies as they try to escape but returns in ghostly form to spur on her husband.

The group meets Achates (Saamer Usmani), Aeneass friend, who accompanies them from one inhospitable land and storm-tossed sea voyage to another in their search for a place to settle. Modern-day refugees, they are unwilling to forget the past or their mother soil but know they must find their future in a new homeland.

The plays first half has an unfocused feel, its narrative sometimes vaguely shaped and emphasizing philosophical musings rather than the story. The second snaps into sharper focus with a greater stress on plot and emotionally engaging characters.

Part of the problem is the physical movement component, which starts effectively but soon gets in the way of the story rather than helping tell it. The companys rolling on the floor, sometimes as waves ebbing and flowing, works the first time but then becomes annoying.

Still, in the hands of director Keira Loughran, sections of the first act are striking, among them Hectors (Mike Nadajewski) description of his citys destruction and, later, an episode in which two well-off, condescending tourists (Nadajewski and Lanise Antoine Shelley) on a beach holiday confront the group of washed-up refugees.

Irony, tension and dark comedy grow richer when the upscale resorts manager (Tiffany Claire Martin) tries to deal with the starving refugees. Theres also drama when the group meets Achmaenides (Josue Laboucane), an enemy they pull from the sea.

In the second half, the script allows Potter, always an engaging actor, to become a more active figure. This part features a number of authoritative performances, starting with that of Robinson in several roles: a seemingly concerned but actually uncaring immigration officer the sibyl (resembling a brothel madam) who takes Aeneas to meet his dead father in the underworld and Allecto, a furious camp refugee whos had enough of being ignored.

Theres also fine work by Shelley as the touching Elissa, a refugee who becomes involved with the hero. Shes the romantic Dido figure from Virgil, whom Aeneas must leave to fulfil his nation-building mission.

Spencer-Davis as Anchisess ghost has a splendidly sweeping speech about the souls of the exiled, a litany that draws on various cultures and periods, and, in the shows final section, Yaraghi scores as Lavinia, a sympathetic nurse who joins Aeneas and his son (Malakai Magassouba) in a new promised land.