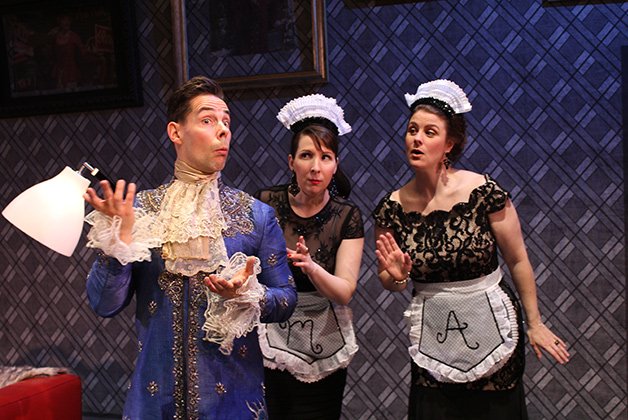 Director Guy Mignault’s production of Les Precieuses ridicules (The Precious Young Ladies) adds some new text and songs that, like Moliere’s satire on his contemporaries, send up current manners and fashion.

In the original, two women from the provinces are determined to be flirtatious socialites and live the lives they’ve read about in romantic novels. The men wooing them are just too common, sneer the women, who reject their marriage proposals. To get even, the men have their servants, presented as trendy poseurs, woo the women.

Mignault’s take on the story includes poetry and song by French and Canadian writers, among them Boris Vian and Georges Brassens. Musical direction is by Claude Naubert, who’s worked frequently with the company.

For its two final shows of the year, Young People’s Theatre takes its school-age audiences to India and Japan.

Sultans Of The Street, a new play by award-winning author Anusree Roy, follows the lives of four children from different social classes who beg on the streets of Kolkata, India, under the thumb of a shadowy adult who calls herself Auntie. Dressed as gods, their job is to bless those who give and rail curses on those less generous.

Though all would like to change their lives, two are materialistic and the others hope to attend school.

Colin Doyle, Mina James, Richard Lee, Ali Momen and Zorana Sadiq are the performers in this mainspace show, under the direction of Nina Lee Aquino. It’s aimed at audiences eight and up.

Running in the studio at the same time is Jared Matsunaga-Turnbull’s Paper Song, part of a tour by Edmonton’s Concrete Theatre.

Based on Japanese folklore, the play deals with a crane, a young mouse and her grandfather who fight a tyrannical goblin. The show uses large-scale origami and shadow puppetry as part of the storytelling.

Directed by Caroline Howarth, the production, suitable for those five and up, features Sean Baek, Ntara Curry and Zina Lee.

Nightwood Theatre’s Write From The Hip program is one of the city’s most fertile play creation units.

Members go through a year-long script development process working one-on-one with dramaturgical help and present workshops and readings, all aimed at the completion of a full-length script.

The current team of Hip-sters show their work over three nights, beginning Monday (April 28) with Georgina Beaty’s We Are On Our Own Now, inspired by the life and work of Henry Morgentaler.

It’s followed by Katie Sly’s Serenity Wild, in which a young, emotionally tortured woman finds herself in a surprising sexual situation (April 30) and Madison Walsh’s Haan, in which a Canadian woman teaching English in Korea meets an ambitious local policeman (May 1).

It’s the story of Trish, a grade 12 student being tutored for a university entrance exam by her friend Carly things get complicated when Trish notices something under Carly’s sleeve.

Noting that the play’s subject matter is hard to broach, Taitt says that she’s “compelled to create works that rattle society’s moral conscience.”

Next season’s productions include William Mastrosimone’s Bang Bang You’re Dead, in which the ghosts of victims confront a high school shooter, and the 1970s rock musical The Me Nobody Knows, one of the first shows to give voice to ghettoized youth.

Three Toronto musical theatre companies collaborate on what looks like a winning fundraiser.

A celebration of the strengths of the local scene, the party features 45-minute sets by guest DJs Sharron Matthews, Justin Bott and producer Derrick Chua, each drawing on their favourite dance tunes from the musical theatre canon.

Admission is free, but RSVP to ari@actingupstage.com.