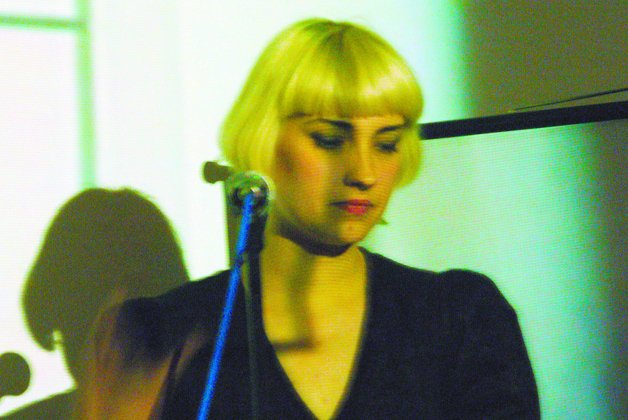 Swedish-born synth-pop musician Molly Nilsson has earned a reputation for being press-shy. But her aversion to doing interviews has nothing to do with being a shrinking violet.

“I’m not very shy at all, and I do have a great lot to say about things,” she explains. “But I like to let the music speak for itself, and once it’s found a listener, I don’t want to interfere like a mom knocking on the door with cookies.

“I never read interviews for the same reason. I prefer not to know about the artist behind the work.”

But she does offer up a little about History, her new album of minimal lo-fi synth-pop sung in her low, melancholic deadpan.

“Each song tells a story, and together they form a narrative. No one life weighs more than another, yet not everyone ends up in the history books. I took this opportunity to feel what it’s like to hold the pen that writes history.”

Raised in Stockholm, the 27-year-old moved to Berlin for the same reason many artists and musicians flock to the German capital: it’s affordable. Intending to be a visual artist, she fell into making music in 2007 and has since released four albums via her Dark Skies Association imprint. Last year her profile got a boost when indie pop eccentric John Maus sang over her 2008 song Hey Moon on his latest album.

“Berlin is a good place to experiment if you’re an artist,” she says. “Had I stayed in Stockholm, I would not be making music in the first place.”

Nilsson’s a charming, erudite composer adept at writing pithy pop songs that sometimes recall the tragic romanticism and ironic wit of the Magnetic Fields’ Stephin Merritt. On opener In Real Life, she sings: “Online I never feel alone. I never feel alive. Call it what you like, in real life.”

“The digital world is without a doubt a part of our lives now, and I don’t think it’s less real than faith or love or your bank account,” she says. “It’s [something] we can’t touch, but still it’s there. We’re all children on the internet, because we haven’t figured out what its real use is yet.”