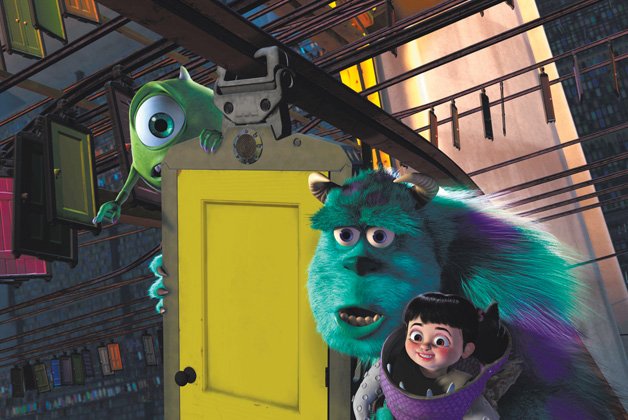 The new 3D conversion of Monsters, Inc. is an anomaly for Disney previously, the studio’s dimensionalized reissues – Beauty And The Beast, The Lion King, Finding Nemo – have served as promotion for their Blu-ray release. But Monsters, Inc. was one of the first Pixar titles to be released on BD, so what’s going on?

Simple answer: Monsters, Inc. 3D is here to remind us that Disney/Pixar’s prequel, Monsters University, is coming to theatres next summer. Disney did the same thing with the first two Toy Story pictures in 2009, reissuing them in 3D in anticipation of Toy Story 3. Worked out pretty well.

And really, I can’t think of a Pixar title more deserving of a theatrical rerun than Monsters, Inc. Sure, it was released between Toy Story 2 and Finding Nemo, which are probably the most beloved titles in Pixar’s early catalogue, but it doesn’t suffer by comparison. It’s one of the studio’s most purely entertaining productions, with lively voice work by John Goodman, Billy Crystal and Steve Buscemi and a brilliant concept in which the world of nightmares is literally fuelled by the screams of children – until Goodman’s working-stiff bogeyman, Sulley, accidentally brings a little girl back to Monstropolis with him.

The impeccably rendered antics that result – including a glorious homage to Chuck Jones’s Looney Tunes short Feed The Kitty and a spectacular chase sequence that tops Toy Story 2’s baggage-sorting climax – will certainly look lovely in 3D, since digital animation is particularly amenable to post-conversion. And I have no doubt that Goodman’s delivery of Sulley’s final line will reduce me to a blubbering heap, just like it always does.

But keep your eye out for a single shot about midway through the picture – a hand-held, over-the-shoulder shot “filmed” as a hazmat team rushes to help a monster who may have been contaminated by human contact.