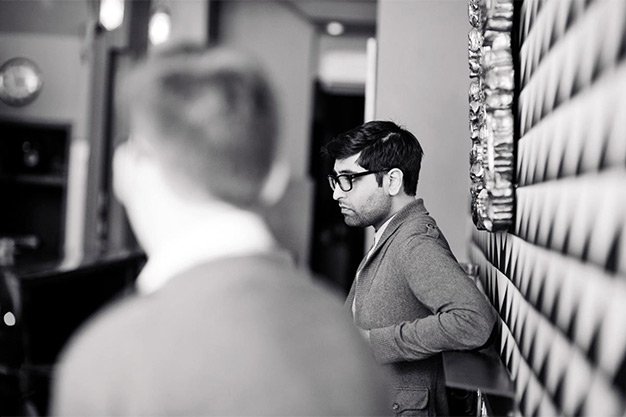 I got to know Pavan Moondi when he was interviewing filmmakers and hosting special screenings as part of The Seventh Art. And now Im interviewing him about his own film, Diamond Tongues, which he co-directed with another of the Seventh Art team, Brian Robertson, from his own screenplay.

Its not that weird, really. Hes been making movies all along. In fact, Diamond Tongues is a natural progression from his first feature, Everyday Is Like Sunday, which he describes as a film about not knowing what you want to do with your life.

The new movie, which stars July Talk frontwoman Leah Goldstein as a young woman trying to break into the Toronto acting scene, is about knowing exactly what you want to do with your life but feeling like you have no control over the thing that you want.

If youre a musician, you can start busking or playing at open-mic nights, and if youre a filmmaker you can write a film, but if youre an actor a female, especially youre kind of dependent on other people to be able to act, he explains. Its the most dependent profession there is. You cant go on a street corner and start acting, not really. So that was the genesis of it.

Although he directed Everyday Is Like Sunday on his own, Moondi says co-directing Diamond Tongues with Robertson just made sense for the project.

We were both working at the same place at the same time, and we had lunch every day together, he says. Wed talk about ideas, things we wanted to do. I wrote the script by myself, but the final film did change a lot [just] because there were so many people that had so much input into it. Which I think is my ideal way of working.

Luck is also a factor, as when Moondi and Robertson checked out July Talk at a TIFF party and came away with not just their star, but their director of photography as well.

Leah came out onstage and poured a beer on [bandmate] Peter [Dreimanis]s head, jumped up on a speaker and then jumped off and fell on the ground and played dead. She was [lying] at my feet and Brian and I were standing there, and we were like, This would be a great poster for Diamond Tongues. Just her laying there in this fancy dress.

And during the set we were like, She should just act in it. Just get her to do it.

The set ended and I was trying to track Leah down to ask her to be in it, and I saw Peter and asked, Do you think Leah would be into acting? And he was like, I dunno, but Im a cinematographer and Im looking for work.

It just turned out that we actually did need a cinematographer, he laughs, so we hired him on the spot.

Pavan Moondi on directing with Brian Robertson and making the entire crew collaborators:

Moondi on the advantages of working very, very quickly:

Moondi on Leah Goldstein’s terms for taking the part: