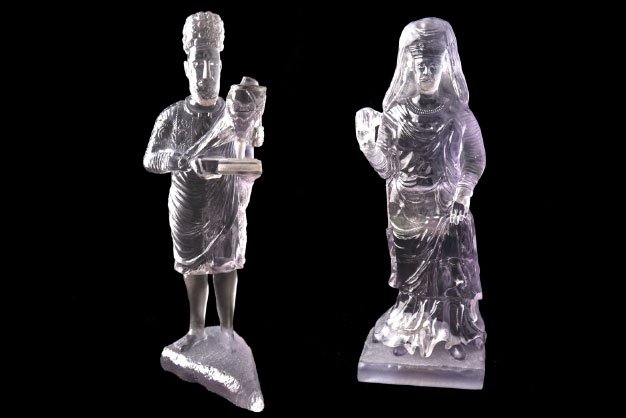 Throughout history, war has destroyed artworks, whether through campaigns of erasure or collateral damage. Iranian-born, U.S.-based Morehshin Allahyari’s Material Speculation: ISIS focuses on the latest example of the former, the smashing of sculptures in the Mosul Museum in 2015.

Using 3D printing, she’s made recreations of the demolished stone figures. Visible through their transparent plastic are flash drives containing information about them. Most originals were human-sized or larger, while Allahyari’s sculptures are under a foot high, because she’s mindful of wasting petrochemicals and because they are approximations made from photographs.

Their material seems ghostly and ephemeral, meltable as ice, and their small size gives them the disconcerting feel of items you might have picked up at the Mosul Museum gift shop. Presiding over them is an Assyrian protective spirit, or lamassu, a winged bull with the head of a bearded man. Goddesses remind us of the current situation of women under Islamic fundamentalism.

Like all new media, 3D printing brings up questions, some of which Allahyari and Daniel Rourke address in their accompanying video, The 3D Additivist Manifesto. Its text, read aloud by a robotic voice, crawls beneath an animation of artworks and pop-culture flotsam bobbing in the sea.

One question is, who owns the data for 3D-printed art? Allahyari comes down on the side of open source by putting all the info for the sculptures here online for anyone to print.

Archaeologists are sending 3D cameras to zones where antiquities are threatened by ISIS. But digital copies, no matter how accurate, will never have the same charge as sculptures chiselled by human hands in another time. In that sense, 3D printing is not so different from photographic reproduction of 2D artworks.