NOW MagazineNewsMoss Park gentrification a cause for concern

Moss Park gentrification a cause for concern

Poor, homeless, sex workers and drug users will be the invisible casualties of plans for LGBTQ-focused sport centre in Toronto's Downtown East 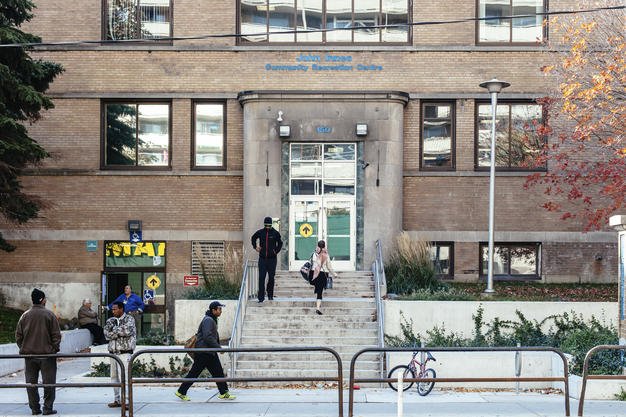 Gentrification by any other name is still gentrification. The seemingly benign language of “revitalization,” “vibrant public spaces,” “exciting opportunities,” “community resiliency,” “inclusion model” and “diversity” only disguises the reality that poor and homeless people will be displaced and the policing of poverty will escalate where gentrification takes place.

In Toronto’s Downtown East (DTE), the proposed LGBTQ-focused sport centre at Moss Park’s John Innes Community Centre, a joint venture of the 519 Community Centre and the city, is a concern for anti-gentrification activists, as is the closely related nearby George Street revitalization project, which is promising to “deinstitutionalize” that neighbourhood by consolidating most homeless services and individuals under one roof.

These discussions generated some confusing and contradictory information that increased rather than alleviated the group’s concerns.

While making passing references to “fairness in balancing interests” and “recognition of diversity,” DTE condo owners’ stated top priority – safety – means working “closely” with police “to advance law and order,” according to one residents’ association website.

DTE residents’ associations list “beauty, safety and environmental and economic viability” among their goals. These groups support more market-rate apartments that will attract young professionals, with new restaurants and retail opportunities. At the same time, they note the need to protect heritage buildings and to ensure that any new tall buildings do not shade Allan Gardens.

Overall, the invisible casualties of these initiatives will be poor and homeless people, sex workers and drug users.

On the issue of Moss Park redevelopment, Wong-Tam says she hopes to generate funding for a community kitchen and affordable housing above a second ice pad.

Staff at the 519 claim the sport centre project changed from its original LGBTQ focus to an “inclusion model” in early 2015, but that they were too busy to communicate these changes to the queer community. However, as recently as last September, when QTCD members attended the 519’s annual general meeting, the LGBTQ focus was strongly promoted in speeches, the annual report and the sport-focused qualifications of several candidates for the new board of directors.

According to 519 staff, the anonymous donor who committed about one-third of the $100 million cost of the project (and had in 2012 envisioned a complex focusing on the recreational needs of predominantly middle-class LGBTQ users) has now placed no conditions on the donation. All involved seem to assume that these very different groups – poor and homeless people, sex workers and drug users as well as LGBTQ communities – will share the new facilities in the spirit of inclusion, or so-called “social bridging.”

Clearly, there are significant unanswered questions concerning governance of the proposed centre.

Requests for proposals for community consultations went out to a pre-selected group of consultants last month, and the 519 began advertising for two community organizer positions to do the groundwork.

But QTCD was told that 519 staff, as city employees, have to obtain city approval for every public statement they make concerning the Moss Park development.

This level of control and secrecy is incompatible with genuine community involvement, particularly in view of the growing condo threat in the neighbourhood and the potential for disenfranchisement of poor and homeless people. An Edmonton developer has amassed more than 10 properties in the block southeast of Moss Park, with plans to build three condo towers of 39 to 45 storeys on a 2-hectare site.

Yet, staff members at the 519 were more than willing to meet privately with community groups.

This slow trickle of insider information should all be on the public record.

In 1969, in the early years of community organizing in the U.S. and Canada, American activist and social worker Sherry Arnstein plotted the eight rungs of A Ladder Of Citizen Participation to describe citizen involvement in the planning process.

The lower rungs ranged from manipulation, therapy and informing to consultation and placation.

More than 45 years later, on the issue of gentrification in Toronto’s Downtown East, a neighbourhood that in the 1970s was a hotbed of community organizing, many of those in power seem slow to realize that activists cannot be patronized.

Helen Jefferson Lenskyj, professor emerita, University of Toronto, is a member of the QTCD committee. A community forum to plan a response to the Moss Park proposal takes place at John Innes Community Centre (150 Sherbourne) on Thursday (April 7) from 6 to 9 pm. Meal and TTC tokens provided. Wheelchair accessible.