As activists call for a Vision Zero approach to pedestrian and cyclist deaths, a big chunk of Council remains contemptuous of bike riders 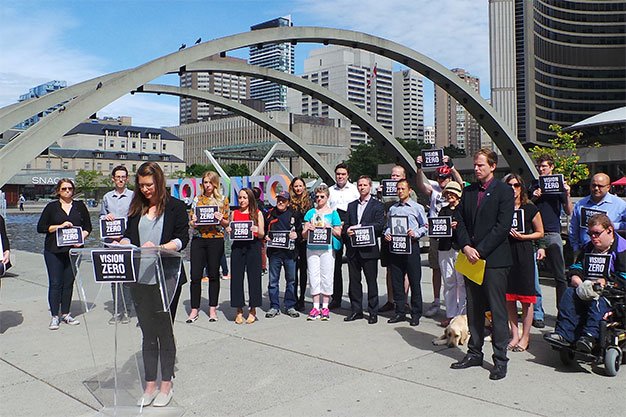 “If you could stand in my shoes for even a minute,” Kasia Briegmann-Samson said Wednesday morning, “you might stop clutching the argument that saving a minute or two off your daily commute is all that important. Instead, you might see that your life and safety, and those of your loved ones, are worth more than driving convenience.”

Briegmann-Samson — whose husband, cyclist Tom Samson, was killed in a hit-and-run at Davenport and Lansdowne in November 2012 — was speaking outside City Hall at a press conference organized by Cycle Toronto and Walk Toronto. Police had initially and incorrectly blamed Samson for running a red light.

More than a dozen friends and family members of cyclists and pedestrians killed by drivers — plus others who themselves had been hurt in collisions — gathered in Nathan Phillips Square to protest the indifference with which Council greets such preventable harms. On Monday, the city unveiled a Road Safety Plan with a decidedly unambitious target of 20 per cent fewer fatalities and serious injuries over 10 years (or about one less person a year).

“I’m so tired of having to tell my kids, ‘I know it’s not right or fair, but this is how things are,'” Briegmann-Samson said. The man who killed her husband plead guilty for failing to remain at the scene and was sentenced to a few months of weekends in jail. 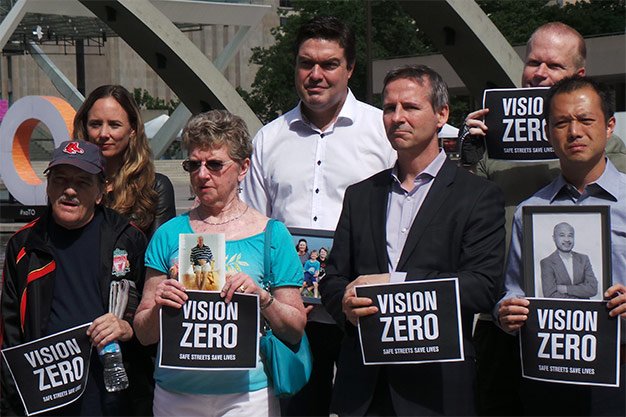 It made me think back to last week’s Council debate over the 10-year bike plan. While councillors voted to double the city’s annual investment in cycling infrastructure at the June 9 meeting, they also deleted most of the plan’s core elements — studies of major corridors that would serve as the backbone of a proper bike network. Council also asked staff to investigate “seasonal cycle tracks” so that current or future separated lanes could be taken off the roads during winter months, when they said drivers are more likely to be annoyed by underutilized road space.

The apparent discrepancy between the relative values of cyclists’ lives and drivers’ convenience makes far more sense once you grasp the condescension and contempt with which a large chunk of Toronto City Council regards cyclists.

Below are some of the things they said, only slightly edited, and interspersed with police reports of collisions that occurred the same day.

According to members of Council, cyclists are… 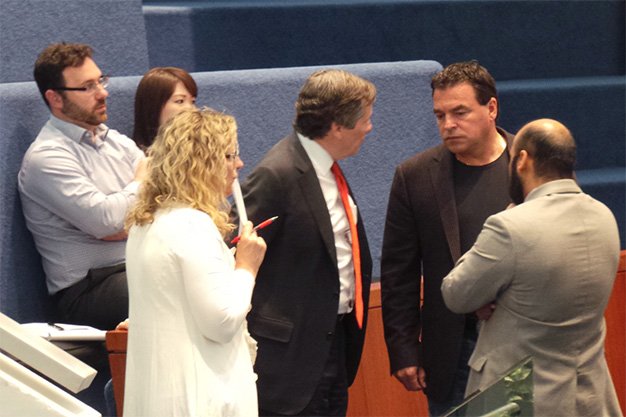 John Campbell (Ward 4 Etobicoke Centre), asking a question of staff: “With the additional expenditure on bike lanes, what will not get done in terms of road work, resurfacing…?”

Deputy Mayor Denzil Minnan-Wong (Ward 34 Don Valley East): “I’m not opposed to having separated bike lanes, but I am opposed to having them on major arterial roads where they conflict on traffic coming in and out of the city.”

…not traffic and also oppressors.

Stephen Holyday (Ward 3 Etobicoke Centre): “With respect to [my motion to take over a dozen more projects out of the bike plan], I’ve simply identified those which have the largest impact to live lanes. And essentially what that says to me is that some traffic lane impacts means that we’re gonna have to close traffic lanes to implement these pieces of bicycle infrastructure. I dunno — I think somebody needs to stand up for drivers in this city.”

…not customers or shoppers or people who eat at restaurants.

Minnan-Wong, explaining why the Danforth shouldn’t be studied for possible bike lanes: “The Danforth proposal suggests that we make it even worse for these businesses, because we’re gonna tell them that their customers and their patrons have to walk even further [from where they parked]. But people on this Council think that’s clever and wise, and that actually by making it more inconvenient to patronize these businesses, that more people will wanna come to be more inconvenienced. Now where is the logic in that?” 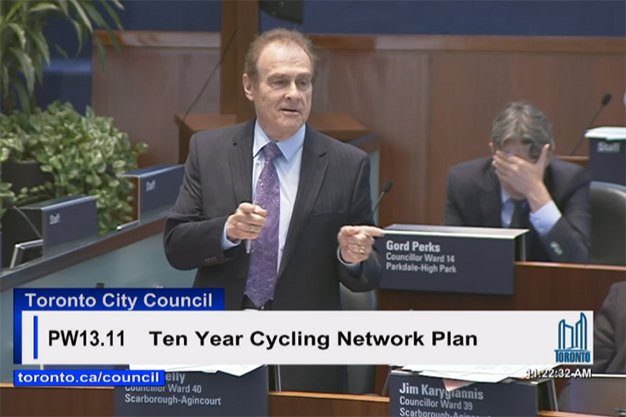 …soon to be obsolete.

Norm Kelly (Ward 40 Scarborough-Agincourt): “Here we are talking about lanes for cyclists, and I suspect, within 20 years, maybe even less, these will be considered not so much bike lanes, but hover lanes. I don’t know if any of you saw the article in the paper about this Quebec entrepreneur who is working on personalized hover platforms. And so, Speaker, although the context here is bike lanes and cyclists, I wouldn’t be surprised if in the near future what we are going to be creating are the hover lanes of the future.”

…dangerous psychos whose presence is a source of anxiety.

Giorgio Mammoliti (Ward 7 York West): “Licensing these cyclists, in the downtown part of the city and only on the main arterial roads, is the right thing to do. And it’s the right thing to do for a number of reasons. I’d even go as far as saying, take ‘em for lessons before they get their licensing approved, because there’s a lot of psycho cyclists in the City of Toronto, and I think the majority of them are becoming psycho cyclists.

“And I think all you have to do — take a drive. Walk. Take a drive along some of these main streets that we’ve put these crazy lanes in. And you can see that it’s not the cars that are going off a little nuts. It’s not the pedestrians that are goin’ off a little crazy. And it’s certainly not the motorcyclists that are not driving appropriately and not behaving to the rules of the road. But the psycho cyclists are! And you can see them because they increase the level of stress to everybody. And if anything, I would argue that they’re the ones that are putting everybody at risk.”

…hibernating creatures whose absence is a source of anxiety.

Jim Karygiannis (Ward 39 Scarborough-Agincourt): “I don’t mind bicycle paths. But when we take existing streets and chop them up in order to put a bicycle lane that is only used during the summer and then it’s not used during the winter, the drivers just get uptight. There’s anxiety that gets built [up].”

Budget Chief Gary Crawford (Ward 36 Scarborough Southwest), questioning the bike plan’s funding: “You can actually get that money from the existing [Transportation Services] budget? Does that mean we have extra money sitting around to spend on priorities? And is this the priority we want to spend [on]?”

…interchangeable with transit riders but not with motorists.

Frank Di Giorgio (York South–Weston): “When it comes to using scarce resources, from an infrastructure point of view, what [Crawford’s] basically saying is, ‘Look, we have an envelope of funds that we are going to be able to [use to] finance our transportation needs.’ And if you’re gonna increase the number of viable options that people have to get around the city — if you’re gonna say, ‘On top of transit, you should be using bicycles or you should be using Uber,’ then we have to allocate the envelope amongst those various options. We cannot continually look to increase the envelope if you’re providing options that tend to sort of work contrary to one another. In other words, the more people that use cycling as an option, the fewer people that might use transit. I don’t think you’re gonna get people going from cars to cycling.”

Stephen Buckley, General Manager of Transportation Services: “The charges you’re asking for would be provincial licensing — and things like gas tax, again, don’t come to the City of Toronto.”

Mammoliti: “So I’ve noticed that since we have — this is just my observation, it hasn’t been studied, I’m not an expert, but it’s a gut feeling of mine — since we’ve built out some of this infrastructure on our roads, I’ve noticed that the cyclists actually don’t adhere to the rules of the road, even more. In other words, when there’s a red light, they just scoot right through it. When there are pedestrians, they really don’t care. There’s accidents waiting to happen with pedestrians. We’re now wanting to spend more money for a 10-year plan to build more of these things, knowing that cyclists do not pay attention to the rules of the road, in fact break the [Highway] Traffic Act… Can we not be making more money by giving them tickets and that going to your particular cause [of bike infrastructure] as well?”

Buckley: “I think that there’s probably bad behaviour from all road users that we see. I watch this each and every day. Drivers routinely ignore the law. Some cyclists ignore the law. Pedestrians, some of them ignore the law as well.”

Mammoliti: “I agree. The difference between the cars and the motorcycles is they’re licensed and it’s easier to give them a ticket. Right? You can’t really give a cyclist a ticket if they’re not licensed and if you can’t really send the ticket somewhere, right? So I’m suggesting a mechanism here that would bring you revenue, that would help deal with the enforcement part of those that don’t care, and I think that’s the majority of these cyclists, quite frankly. Is it not possible to create a system like this?”

Buckley: “Council has asked staff, I think, on four separate occasions. It was deemed each time that it would not be an effective route. Councillor, it would be no different than, right now, you could issue fines to a cyclist just the way you could for a pedestrian for jaywalking. The police have the right to ask for a form of ID, and you may not perhaps have a driver’s license, but they are permitted to ask for a form of ID.”

…the real selfish ones, because all lives matter.

Public Works and Infrastructure Committee Chair Jaye Robinson (Ward 25 Don Valley West), objecting to increased funding to speed up implementation of the bike plan: “So the Road Safety Plan’s coming this month to [the Works Committee]. And do you agree we need to balance our limited capital dollars to improve safety for all road users, not just one?”

Mike Layton (Ward 19 Trinity-Spadina): “Well I think, given that the City of Toronto, this Council Chamber, supported $400 million of unneeded money to go to the Gardiner Expressway to the benefit of a very limited number of Torontonians and others coming to this great city, I don’t think that $25 million a year, or ramping up to $25 million a year, is much to ask.”

…just going to have to wait until there’s consensus around the value of their lives.