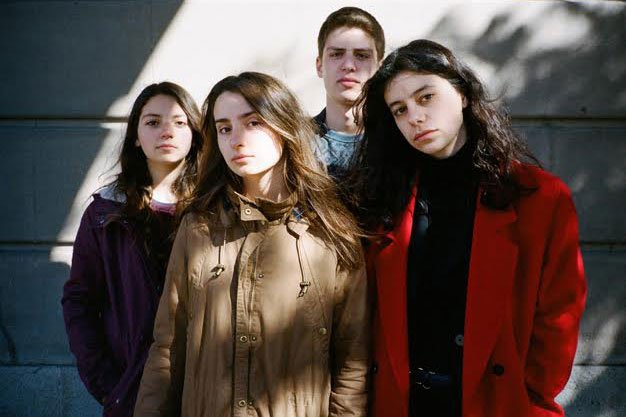 It’s tough to talk about Spain-based Mourn without bringing up age. Everyone in the band is a teenager. Being in such a (rightfully) buzzed-about project and readying to play your music for people all around the world sounds pretty awesome, but it can be tiring when you’re also in the middle of growing up.

“It is hard sometimes,” singer Jazz Rodríguez Bueno says from Barcelona while preparing for the band’s North American tour. “Having to take planes, study, do homework, shows, rehearse, prepare new songs, get up early, spend lots of hours in a van… we don’t have much time for ourselves lately.

“But we do this because we enjoy it, even though it can be exhausting sometimes.”

They can thank the success of their self-titled debut album for their busyness. Mourn’s rise has been lightning fast. After they were discovered via YouTube, Barcelona’s Sones Records put out their first album last September, and it was scooped up for a vinyl release in February through Brooklyn’s Captured Tracks.

It’s sonically dark, angular and immediate, inspired by the looser parts of post-punk and giants like PJ Harvey and Sleater-Kinney, but with all of the issues teenagers deal with.

“You think you’re awesome / I say you’re boring / You called me a baby / I just say ‘fuck you!’” Rodríguez Bueno yells on Jack, one of two songs calling out asshole dudes.

The other, Marshall, is about a friend’s ex (actually named Marcel), who’s since risen in the band’s

estimation. “It’s just a song,” Rodríguez Bueno explains. “We have nothing against him. We wrote it in a moment of anger.”

While not-so-huge things inspire the heavy songs, it’s true that small, everyday events can have big impact Mourn make even semi-silly ideas (like the zombified Your Brain Is Made Of Candy) sound larger than life.

“We build the songs not from important facts or situations – just from whatever we feel when we play. I write about little things that happen to me during the day. They can seem insignificant, but they can also drive you into a cool song.”