A big moment for little films

HBO's anthology worth a little time 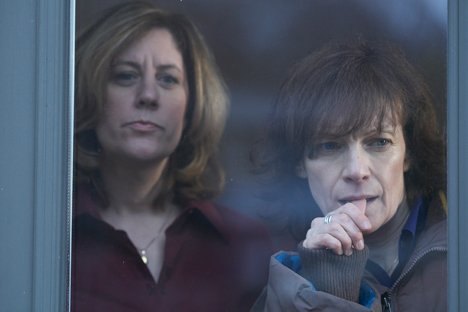 Martha Burns wants out in Do You Want Out?

But flip on HBO Canada this weekend and you’ll see the fruits of their collective labours in an anthology of 10 short subjects called Little Films About Big Moments. The anthology first airs at 8 pm Friday (January 22), to be followed at 9 pm by a making-of documentary, Big Moments In Little Films.

Maddin, Polley, Wellington, Weinstein, McDonald, L’Ecuyer and Gunnarsson were among the talents tapped to serve as mentors to first-time filmmakers culled from all parts of the industry – producers, actors, editors, a production designer, a props master, even a food stylist.

The project was the brainchild of Martha Burns, Susan Coyne and Sonya Di Rienzo, and shepherded into production by Burns and Di Rienzo, who each contributed her own short to the mix. Di Rienzo’s The Translator, which premiered at the Toronto Festival last year, was the first in the series to shoot Burns made Do You Want Out?, starring Tracy Wright and a very expressive golden retriever. Di Rienzo was mentored by Weinstein and Barbara Willis Sweete Burns by documentarian Cynthia Scott.

Burns and Di Rienzo, whose professional association dates back to the television series Slings & Arrows, sat down shortly after The Translator’s TIFF premiere to discuss the Little Films project.

“There was a time when every Canadian short film was some kind of atmospheric, amorphous journey into somebody’s head,” Burns recalls, “and all of a sudden I saw this great short film about some guy honouring his grandfather’s wish to go to a brothel. That was my inspiration to do the first short film we did, just to make sure we had a nice story – which was Sonya’s The Translator.”

Once Burns, Coyne and Di Rienzo had their concept – short films made by people in the industry who’d never directed a film before – they jumped in with both feet, recruiting colleagues and pitching story ideas to one another, and eventually realizing that if each director was expected to shoot his or her short in the space of a single day, they might need the occasional hand to hold.

“No matter how well they know the business from their position of expertise,” Burns explains, “working with 10 first-time filmmakers is like herding cats. It’s a lot of different people to coordinate. A more experienced director who’s doing a one-day film might spend a few hours with his DOP and sort things out and trade ideas and feel confident. We all needed three or four sessions with our DOP and our first AD and so on.

“The mentor program would give us the chance to connect with people we admired and pick their brains a little bit,” Burns continues. “So that was our first level of mentorship, with illustrious mentors. But we all mentored each other, the 10 of us. I had never produced anything before, but Sonia (Hosko) and Stephanie (Markowitz) are both producers and have worked with some of the best producers in the country, so I was learning a lot from that. It was like a mentor a day – whoever we needed would come and help us for a bit.”

“And then everyone sort of became a mentor,” Di Rienzo says. “You’re talking to the grip on your break and they give you a little [technical] tidbit, and you’re like, ‘Oh, that’s great to know!’ Everyone knew what the project was, so people were offering information. You learn from everybody, I think.”

Burns says the compressed schedule created a sort of hotbed of inspiration – though not all of it necessarily worked.

“Everyone had that experience of just trying things when someone had an idea,” she says. “There’s not really enough time to do that, but it feels so good, and you think, ‘Hey, this can be so spontaneous!’ And then you realize the continuity person’s gone white. So you get back on track.”

Of course, all the focus in the world won’t help if you don’t have the weather on your side.

“Martha’s film was written for snow,” Di Rienzo says, “but as the time came closer to shooting, the snow just wasn’t there.”

“My whole vision for the nine months we worked on it was all about snow,” Burns says, “and then in the last week it wasn’t about snow. But you learn to love that part it stretches you. We decided to go with late autumn so we’d have a beautiful blanket of leaves. The trees were bare, but the leaves were everywhere and no one had raked for a month.”

“And of course if you watch it now,” says Di Rienzo, “it’s like, ‘Oh, of course. There are leaves. It’s perfect with leaves!'”