Somewhere, some one is engraving James Cameron's name onto a handful of gold statuettes.Heading into its fifth weekend in theatres,. 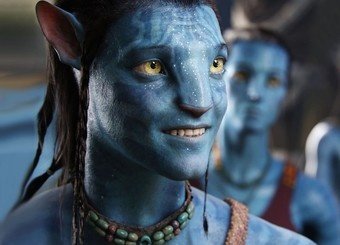 Somewhere, some one is engraving James Cameron’s name onto a handful of gold statuettes.

Heading into its fifth weekend in theatres, the Canadian-born director’s sci-fi epic Avatar has already pulled in more than $1.34 billion, and sits second only to Cameron’s own Titanic as the most profitable movie of all time. It’s success is not limited to its profit margins either.

A visit to the popular film site Metacritic, shows it to be one of the best reviewed films currently in theatres. But before we hand Cameron and Co. a basketful of Oscars, it’s worth looking beneath the digitized blue skin of this picture.

On its surface, it’s a technical marvel that immerses us in a magical universe and urges us to see life through the eyes of others. But at its heart, it’s a story that trades in deplorable racial stereotypes and indulges some of our culture’s most disturbing fantasies.

Be warned, I’m about to go spoiler on yer ass.

While Avatar may be set in the future on a planet far, far away, its real subjects are the native peoples of Earth. The catlike Na’vi people of the planet Pandora are stand-ins for the real world’s pre-colonial native groups. They have all the tell-tale signs of your typical Hollywood Indian, including feathers in their hair, shamans and chiefs, bows and arrows, and painted faces. They whoop and holler as they ride on horseback and communicate freely with animals.

Some aspects of real-world native culture were deliberately incorporated into the movie. The made-up language spoken by the Na’vi is actually a combination of real languages spoken by Native North Americans and indigenous people of Africa and Asia.

In the film, the Na’vi people are infiltrated by humans who pilot genetically engineered avatars that look identical to the Na’vi in an effort to understand them and find out how to kick them off their homeland, which sits atop a valuable mineral.

Our hero is the paraplegic ex-Marine Jake Sully, who inhabits one of the avatars and soon falls in love with the chief’s daughter and leads the resistance against the invading Earthlings.

Watching a movie like Avatar becomes an unsettling experience when its put in historical perspective. As we watch the native inhabitants of Pandora struggle against colonization, we are actually seeing a recreation of events that took place in our own continent three hundred years ago. We know how it turned out in real life: the native peoples suffered crushing military and cultural defeats the effects of which linger til this day.

But in Avatar Sully leads the Na’vi to victory, and the colonizers lose. It’s not a new story either. Many in the blogosphere have pointed out its similarity to Dances With Wolves and Pocahontas. Which leads to the question, why do we like to hear this story told to us again and again?

Isn’t it perverted to take pleasure in imagining colonialism didn’t succeed, even as we enjoy the privileges of a country that colonization created? It’s the classic white guilt scenario: we middle class North Americans know that we are the beneficiaries several hundred years of oppression of this country’s original inhabitants. Being socially conscious and sensitive individuals, we don’t like that fact. When we watch movies white people betraying their own society to fight for native peoples, it allows us to exorcize some of the guilt we feel at benefitting from the crimes of our ancestors. These stories allow us to imagine ourselves on the right side of history without having to actually sacrifice any of our privilege.

Movies like Avatar allow us to escape into a more exciting world, but also let us fantasize about escaping our own white skin. If you think this is too strong a statement, consider this: One major difference between Cameron’s Indian movie and similar films like is that in the end, Jake not only joins and helps the Natives, but literally becomes one of them, leaving his broken white body to enter that of an Indian warrior.

Note that Jake only joins the tribe under the condition that he can a) become its leader and b) have sex with the chief’s sexy daughter. It’s a proposition that apparently resonates with millions of us.

Just like our colonizing forebears, we see Native groups as everything we are not. In the 17th century the colonizers considered themselves civilized, god-fearing, and moral. North American peoples were consequently seen as savage, godless, and immoral.

In the early 21st century we recognize ourselves as polluters and warmongers, and Natives as nearly-supernatural guardians of the Earth and protectors of the peace. They show up in popular culture remind us of the landscapes we’ve ruined. They cry when we litter. Cameron’s Na’vi are nearly perfect. They’re wise, spiritual, and live in harmony with the forest. They don’t fight amongst themselves, they honour other forms of life. They transcend the need for material things (“We don’t have anything they want,” Sully tells his greedy superiors).

In short, they’re everything the Earthlings in the film are not. Portraying native peoples in this idealized way is simply inaccurate. Before colonization, Natives murdered each other for control of resources just like any other group of people in human history. And once Europeans arrived they were eager for material goods. Remember the fur trade?

Despite our urge to use Natives as the “other” that defines our own society, real indigenous people bear little resemblance to Cameron’s perfect creatures of the forest. Put anyone on a pedestal like that for too long and you might have problems when you’re confronted with the fact that they want the same things all other people want. Things that can’t be plucked from the nearest spirit tree, like jobs or political empowerment. As much as Avatar attempts to rewrite the history of colonialism, it’s also trying to teach us a lesson about the present. Cameron goes out of his way to draw parallels between the movie’s central conflict and our own wars against terrorism.

The villain of the piece is Sully’s superior officer Miles Quatrich, a redneck colonel hell-bent on leveling the rainforest with nuclear missiles. Echoing George W. Bush, he motivates his troops by shouting “We have to fight terror with terror!” and promising a campaign of “shock and awe” against the Na’vi. His soldiers are even decked out in uniforms strikingly similar to those currently being worn by American and Canadian troops in Iraq and Afghanistan.

But Cameron’s anti-war message ultimately falls flat for the same reason that his argument for Native rights does. He wants us to see the world through the eyes of our enemy, but it’s much too easy to sympathize with a hyper-beautiful, perfect race. Things get a lot more complicated if our enemies turn out real people who frighten and repulse us. That’s the problem we find ourselves in in Afghanistan and Iraq, and its one the movie, for all its technical inspiration and bold vision, does not seem to have the energy to tackle. In the 17th century, European colonizers saw native peoples as every bit as offensive and threatening as we now do the the Taliban.

Now that colonization has happened and they’ve been disenfranchised, it’s safe to cast Native peoples as our perfect cultural mirrors. Maybe in 100 years, when Iraq and Afghanistan are rebuilding from decades of invasion and war, we will make movies about the spiritual, family-oriented people who used to live there. Much good it will do them, too.

That’s the problem with Avatar, and all the other exercises in liberal guilt that have gone before it. They always come a few generations too late.[rssbreak]