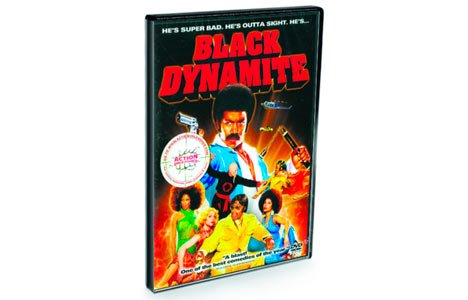 The better you know blaxploitation, the funnier Black Dynamite is, but even if you don’t know the genre, it’s still pretty funny. It goes like this: badass dude from the ‘hood foils a hideous racist plot as he stomps his way through the evil white mofos who killed his brother and push heroin to the kids in the orphanage.

The original blaxploitation flicks were 70s cheapies propelled by non-stop zoom shots, jarring jump cuts and overwrought scores. They were rich in bad acting, worse clothes and afros the size of the moon. Director Scott Sanders and his crew have lovingly recreated that look and performance style, mistakes included, with nothing pushed beyond traditional genre bounds, which are ridiculous enough to make this very funny.

Keep a close ear on the dialogue. “Your mama would turn over in her grave if she were here to see this.”

Black Dynamite is full of specific homages. Co-writers Sanders, star Michael Jai White and actor Byron Minns discuss them in detail and point out some of the subtler jokes on their commentary.