Sacha Baron Cohen's Kazakh prankster is back, but it's harder to mock an America that's already a grotesque caricature of itself 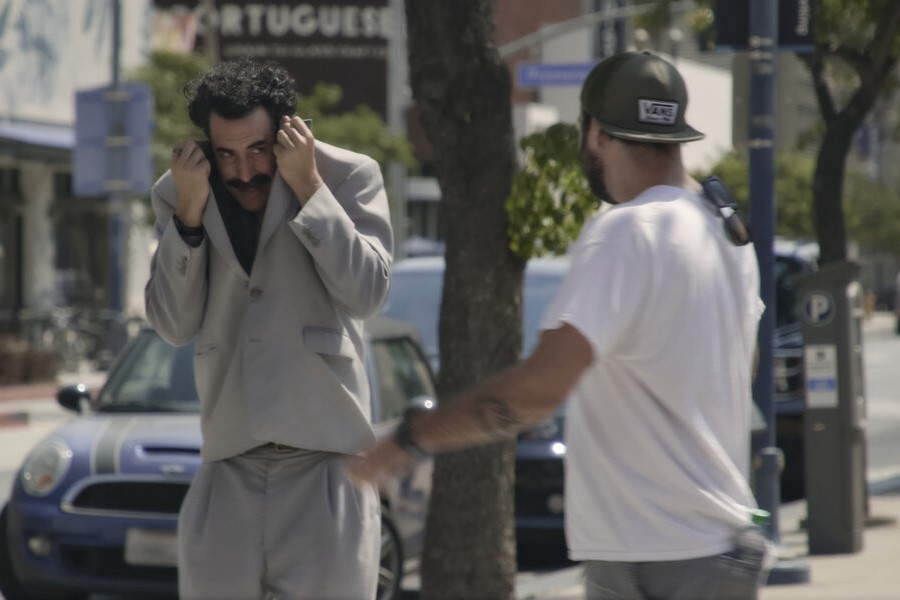 Sacha Baron Cohen does his best to go unrecognized in Borat: Subsequent Moviefilm

I really wanted to just leave it at that, but word counts being what they are I am obligated to keep writing. But what else is there to say? Borat: Subsequent Moviefilm brings Sacha Baron Cohen’s Kazakh journalist back from exile for another tour of America, ostensibly to point out the racism and ignorance lurking underneath the myth of freedom and exceptionalism.

But in the 14 years since his last visit, America’s a different place. Its worst people no longer feel the need to hide themselves, and the targets the new film wants to hit are painfully obvious. It’s like watching a stand-up comedian pull out old material and insist it’s just as vital as ever.

Baron Cohen last sent Borat rampaging through America during George W. Bush’s second term, long before Barack Obama’s election triggered racist white idiots to form the Tea Party, which rotted out the Republican establishment and led to the ascension of Donald Trump. Team Borat had the benefit of obscurity back then, which evaporated when the movie opened in 2006 and became a massive hit. It’s harder to prank people when your character is so recognizable he has his own Halloween costume.

The new film at least acknowledges this by having people recognize the character as soon as he arrives from Kazakhstan in Texas, forcing Borat to adopt a new series of disguises to better blend in. (He favours fat suits, glasses and beards.) And he has a new partner in crime, Ken Davitian’s Azamat having been repurposed by the Kazakh government: a previously unknown teen daughter, Tutar, played by Bulgarian actor Maria Bakalova.

Bakalova commits fully to the monobrowed dull-wittedness that defines the Sagdiyev gene pool, with an energy that gives her equal footing in every scene with Baron Cohen. Their relationship is easily the best thing about the film, because it’s been so thoroughly thought out: she even matches him in the “Kazakh” dialogue scenes, which is fascinating to watch because Baron Cohen switches to Hebrew while Bakalova goes into what I assume is Bulgarian, and the conversation remains coherent.

But that’s a technical accomplishment, like Borat’s various disguises over the course of the film – which at one point involve an elaborate Trump suit that must have cost tens of thousands of dollars to build and apply, and which we see for maybe eight seconds of blurry video as Baron Cohen rampages through a crowd at the 2020 Conservative Political Action Conference before being escorted out by security. The prank he was trying to pull is thwarted; I’m not even sure why that scene is in the movie at all, except perhaps to justify the expense of attempting it in the first place.

A lot of Borat Subsequent Moviefilm has that problem: it’s all setup, and very little payoff. The first film is so powerful (and so funny) because the cameras just sit and watch while Baron Cohen encourages people to reveal their worst selves; the concept also allowed for a camera crew, while the new movie establishes Borat and Tutar as entirely on their own – which doesn’t make a lick of sense, especially once the COVID pandemic intrudes on the storyline.

(It made me realize how invaluable the character of Azamat is to the first film: we could believe he’d worked to set up every interview and opportunity. No one’s doing that job here, so Baron Cohen and Bakalova just keep barging into situations and bothering people until they get tired.)

Maybe it’s just an issue of diminishing returns; I found myself wondering if Baron Cohen’s abysmal attempt to relaunch his prank-interview gimmick with 2018’s Who Is America left him thinking its failure lay with his reliance on new characters, rather than in leaning on a concept that’s past its prime.

At least in the original there was a sense that Borat and Azamat were fictional characters constantly interfering with the real world; here it’s impossible to tell who’s in on the joke, or even where the joke is pointed.

One scene that finds a dispirited Borat visiting a synagogue and talking about the Holocaust with an older woman in the congregation is impressive in the way Baron Cohen’s mark refuses to buy into any of his nonsense, patiently correcting his obvious misconceptions and trying to explain Judaism to him in a calm and rational fashion. But neither her explanations nor Borat’s responses are funny or illuminating; again, I have no idea why that scene stayed in the final cut.

And we’re back to the essential problem with Borat Subsequent Moviefilm. All Baron Cohen and his collaborators want to do is prove their points all over again – America is a profoundly racist country divided by prejudice and run by wealthy conservatives who pretend to care about the underclass but literally don’t care whether they live or die – but they’re old news.

Also, certain ghoulish old Republicans will do and say anything for a few minutes of television exposure – up to and including following an attractive young woman into a hotel bedroom. So… points to Baron Cohen for capturing that on video, I guess.