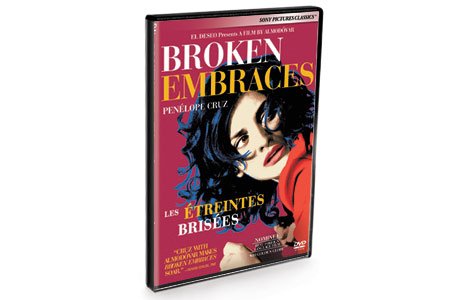 From the start of his career, director Pedro Almodovar has shown a love of 40s noir melodrama and women’s pictures. Broken Embraces has all the elements: the rich old man with the young mistress, her secret affair, a terrible crime, revenge, betrayal, obsessive love, the poisonous effect of the past on the present and creepy minor characters. It also has some lovely noirish shadows and suspense music.

But the story plays out in decidedly unmelodramatic ways. Big revelations are received calmly. One crime fades away and a stranger one rises up only to receive an almost throwaway resolution.

Given the evocative final line and the fact that the main story is told in flashback by a blind film director, it’s tempting to regard this as a comment by Almodovar on his art. That view gets support from the film-within-the-film, a brightly coloured farce called Girls And Suitcases reminiscent of early 80s Almodovar.

There’s more of Girls And Suitcases in the extras. Check out The Cannibalistic Councillor segment for a hilarious and obscene rant. There’s also a good segment of Almodovar directing Penelope Cruz, whose radiant presence and strong performance make Broken Embraces thoroughly enjoyable as a straightforward drama with a dash of suspense.