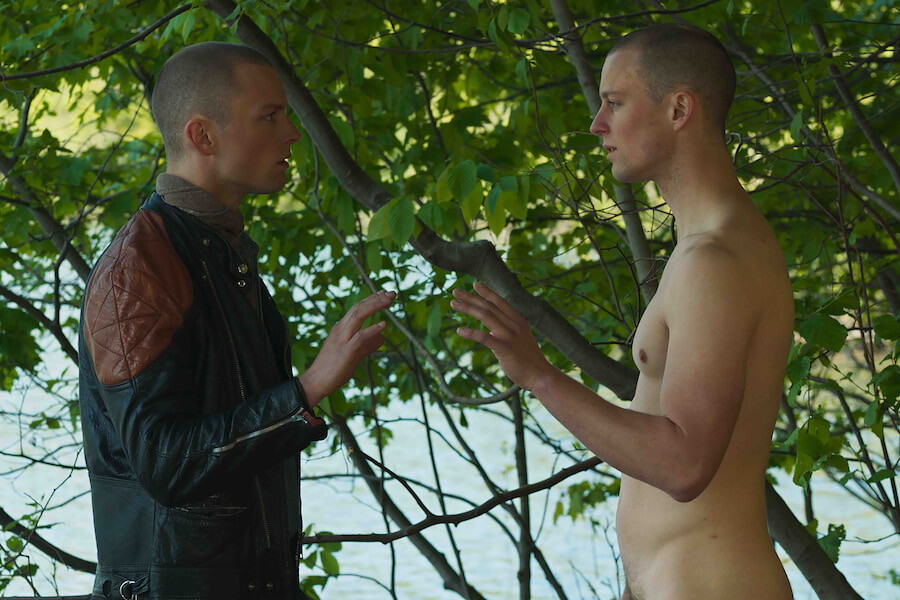 Bruce LaBruce is in quarantine at home in Toronto after returning from Venice, where his latest movie Saint-Narcisse closed out the Venice Days section at the Venice Film Festival.

LaBruce and his team were the only North American crew to attend Venice in-person, he says. He got tested before he left, and tested again when he landed. The Canadian ambassador to Italy turned up for the screening and stayed for cocktails.

Saint-Narcisse was a long-haul: He began writing this separated-at-birth tale with screenwriter Martin Girard in 2014. So braving airline travel in the time of COVID was worth it.

“When you put that much work into something, you want it to have a good launch,” he explains in a phone interview.

In Saint-Narcisse, Félix-Antoine Duval plays Dominic, a narcissistic Montrealer with a penchant for taking self-Polaroids. He sets off in search of his long-lost mother, who is rumoured to be living as a witch (and a lesbian) in Saint-Narcisse. Upon arriving in town, he spies a local monk who looks strikingly familiar.

LaBruce’s last feature outing, The Misandrists, riffed on the schoolgirl genre, and this film finds ample opportunity for exploitation in another movie device: twins.

The plot is a retelling the Narcissus myth by way of a heavily Freudian reimagining of The Parent Trap – think Hayley Mills moving into a 70s liberationist commune. The movie is full of psycho-sexual Catholic terrors that are offset by the comforting autumnal palette of rural Quebec.

The movie’s revolutionary subtext will be familiar to long-time LaBruce viewers, but its themes of collectivism and alternative family structures feel especially timely as economy crashes and the culture wars head into overdrive.

As Saint-Narcisse makes its way through the festival circuit – a Canadian release plan via distributor Raven Banner is TBD – we caught up with LaBruce to talk family affairs, Insta-gays and the many faces of narcissism.

The theme of alternative family structure in Saint-Narcisse feels timely. Recent films – like Nomadland and The Inheritance – have explored collective living and the breakdown of the nuclear family. Was this family theme part of the original inspiration when you were writing the script?

The film was always about Freud’s idea of family romance. This idea that there are always sexual tensions within the nuclear family that have to be repressed for social reasons. The problem is there’s so much shame to those kinds of feelings of attraction and sexual desire within the nuclear family that it becomes really toxic. That’s something that I have been aware of since I studied with [late film critic] Robin Wood at York University. He taught this theory that horror films are about the return of the repressed. Any sexual desires you’re made to feel guilty about always erupt in a monstrous form if they’re not acknowledged. It’s almost a parody of the idea of family romance. But it also opens up the possibility of alternative families, which is quite trendy.

Obviously the movie is set in the 70s so a lot of conversations around alternative living would have been in the news.

That’s part of the reason I set the film in the early 70s, which is also my favourite era of filmmaking. The films challenged notions of not only formal and aesthetic conventions, but also demystified Hollywood myths and questioned very basic social structures and hierarchies. That era was all about liberation – Black liberation, female liberation, gay liberation. That’s why the cinema was so exciting and challenging. Now, in Hollywood, it’s rare to have those kind of social conventions questioned.

It’s bittersweet to think back to those days when revolution was idealistic, fresh and militant and also socialist based. And maybe it’s a bit heartening because the cycles of history are unpredictable, but they do tend to be circular. [The current moment] could conceivably be turned around eventually.

Do you feel like the family structure is oppressive?

It’s interesting because the repressiveness of monogamy and the institution of marriage are legitimized in the gay world – it’s an embracing of these conservative institutions. The family is definitely one of those institutions.

Narcissism is obviously a big theme in the movie. One aspect of narcissism you don’t hear people talk about often is that it stems from shame. The narcissistic person is trying to overcompensate for perceived inadequacy. Do you agree with that?

Shame and insecurity. But that doesn’t fully explain it. There’s three different kinds of narcissism that I talk about [in Saint-Narcisse]: One is the obvious narcissism of the twins, which goes so far as to break this social taboo of the brothers hooking up with one another – twincest. It’s the most socially acceptable form of incest because people can kind of understand if you have someone in your life that is an identical copy of you, you’re going to have desire for that person. Not always, but it’s understandable how that could happen.

Is that a consequence of the liberation movements? “I don’t have to think about my familial relationships anymore.”

It’s more just selfishness. Or maybe just their priorities are more about fulfilling their own desires. The third idea of narcissism is Freud’s idea of object relations. In infantile sexual development, the child can’t really distinguish between themselves and the parent, in terms of their bodies and their sexuality. That is a little more weird and conceptual – and Freudian. There’s something about that separation anxiety, the twins being ripped away from the mother at birth. They don’t have that same kind of development with the mother, which makes for a different kind of narcissistic rebellion.

What do you like about Freudian thinking? A lot of psychologists argue his theories have been discredited.

It’s like calling yourself a Marxist. You have to take into consideration all the failed attempts to institute Marxism. There’s very basic Freudian principles that you cannot dispute. The idea of the unconscious, the idea of family romance. The one I always fixate on is the tendency toward debasement of the love object, which people seem to have a big problem accepting. There’s a lot of naïveté, even now in the woke movements, about what the nature of sexuality is, biologically. That’s a controversial thing to say, but sex is not a walk in the park. Sex is a very strong, primitive desire. This idea of the id, ego and superego and the reality principle and pleasure principle have always been essential models that I find hard to dispute.

What are your favourite movies about twins?

In my movie the twins are called Dominic and Daniel, which is a play on De Palma’s Sisters. The twins are named Dominique and Danielle in that film. He was loosely inspired by the Dionne quintuplets. In terms of the special effects, we watched Cronenberg’s Dead Ringers. He really pioneered some twinning effects that hadn’t been done before. And of course, The Parent Trap, which is what my plot is partly based on: one twin going to the other family. But the original film – I’m not crazy about the Lindsay Lohan remake.

Let’s just say Lindsay Lohan is no Haley Mills. Although I like Lindsay.

Tell me about casting Félix-Antoine Duval as the twins. He’s mainly known within Quebec?

He’s a television star in Quebec, but not outside. It’s his first feature film and it was his first time working mostly in English. He had a dialogue coach and an acting coach for the twin thing. He told us in the audition that he could drive a motorcycle, but he lied so we have to give him lessons. He has that classic face and that was important. If you’re making a retelling of the narcissus myth you need someone who justifies the myth. He was just so open about the whole concept, generous with showing his body and un-self-conscious about it. He was very committed.

We all have our narcissist tendencies. But for someone that gorgeous, he could be more narcissistic.

Everyone’s a porn star now with OnlyFans. People just send me a dick pic as a hello. It’s probably because I’m a known pornographer. It’s a bit presumptuous but I don’t really mind – depends on the dick. What’s more disturbing is the kind of pornography of extreme narcissism with these Insta-gays. It always shocks me when people are so blatant about their vanity. They’re posting pictures and saying, “Well, do you like me better with or without the beard?” or “I’m feeling particularly sexy today. Who would fuck me?” [laughs] Meanwhile they’re gazing at themselves on the little screen. Everyone is carrying around a little mirror.

On Zoom meetings it’s hard not keep looking yourself.

Everyone is entitled to a certain amount of vanity, but these extreme cases are like a malaise. It’s fine if the whole model of culture is shifting to a more virtual kind of reality but it’s so hyper-capitalist, so self-absorbed and so solipsistic. It feels like there is a real disconnect with what used to be called the real world.