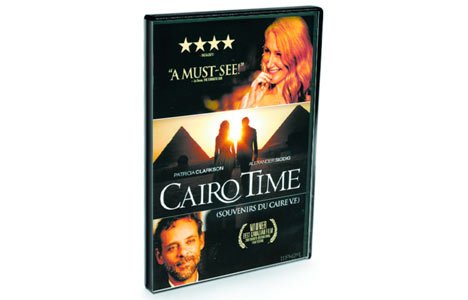 From beginning to end, Cairo Time is one giant commercial for that city’s scenic beauties. Virtually every shot is bathed in soft, golden light and set at an elegant hotel, colourful bazaar, magnificent mosque, on the Nile or near the pyramids. It’s a total treat for the winter-weary eye.

The tissue-thin story barely distracts from the scenery. Juliette (Patricia Clarkson) arrives in Cairo to meet her husband, but he’s stuck at work in Gaza. His old friend and former colleague, Tareq (Alexander Siddig), shows her the sights. Gradually, they fall in love, a thoroughly banal process that involves small talk, occasional laughter and covert glances.

Clarkson and Siddig are both excellent physical actors whose bodies reveal every nuance of emotion under the trivial dialogue. Trouble is, the emotions are simple and conventional (Juliette’s reluctance to cheat is the only complication) and the characters so restrained that life-changing passion is out of the question.

In the commentary she shares with cinematographer Luc Montpellier, writer/director Ruba Nadda says she wanted to make an old-fashioned Hollywood romance, but those movies featured some witty repartee, a bit of melodrama and above all, some well-staged key moments. Cairo Time has exactly one charming scene. It involves Tareq’s attempt at a kiss and the aftermath.