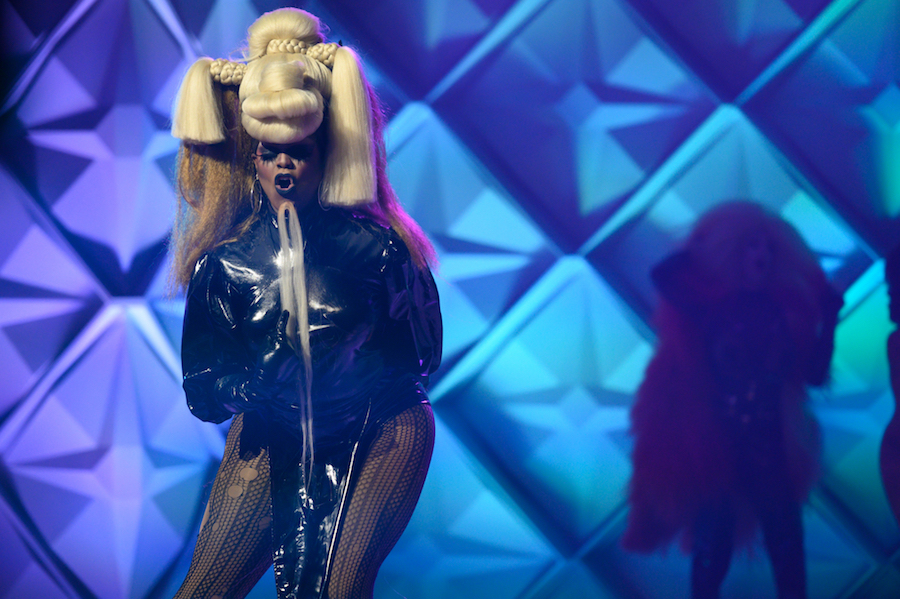 Regulars at the bars in the Church-Wellesley Village may not have known the name Anastarzia Anaquway before she became the first Bahamian queen to ever sashay into the Drag Race workroom.

A seasoned pageant competitor with 15 titles and member of the kiki ballroom scene, she is the reigning Miss Black Continental at Large and spends more time competing in the U.S. than doing drag in Toronto.

Though she often struggled in the competition, her “heightened sense of fashion” in episode’s one’s Canuck Couture challenge (“I was robbed!”) deserved a second look. She also had her fellow competitors in tears after opening up about being shot three times in the Bahamas and moving to Canada as a refugee.

She also proudly reps Toronto’s East York neighbourhood, where she’s lived for the past five years. The coronavirus pandemic means she won’t be appearing on pageant stages for a while, but she’s deepened connections with her fellow Toronto queens in the Drag Race sisterhood.

We caught up with Anastarzia Anaquway the day after her elimination to talk about her childhood-inspired runway look, how pageant queens get pigeonholed and the reaction in the Bahamas to her appearance on the show.

All the other Toronto queens on the show said they’re from Toronto. Why did you decide to represent East York?

Those girls are really from downtown Toronto. I’m on the outskirts of Toronto. Child, ain’t nobody else gonna be sayin’ they’re from East York, Ontario so Imma claim it.

Somebody sprinkled stardust on me and I became a drag queen [laughs]. Eighteen years ago, back in the Bahamas, I went to a fashion show and I saw this very tall, statuesque drag queen – Victoria Diamond was her name. I just fell madly in love. I was like, I wonder if I can do that? That summer I tried it. It was okay. Then, that winter, I did it again for a competition and I won. I’ve been doing drag ever since. Pageantry, competing – it’s very addicting. I got the bug.

What’s it like being a pageant queen on Drag Race? People often have expectations about what that means.

When you enter a competition like Drag Race those different styles just go completely out the door. I claim to be a pageant girl, somebody else claims to be a show queen and at the end of the day we’re all going through the exact same experiences. The type of queen you are doesn’t even matter when it comes to Drag Race. You are correct, there are certain standards that people hold you to as a pageant queen. We usually get stereotyped as lacking personality. People keep forgetting before you are a pageant queen, you’re a human.

Do people not understand what happens in the pageant world?

Legit people don’t understand what happens in the pageant world. People have this misconception that pageantry means I’m gonna be very stiff. But that’s not the case. Pageants are a lot of fun. I wouldn’t be doing them for 18 years if it wasn’t. We get to infuse our personality into our walks in the pageant. I was criticized on the runway for being one way all the time – child, anyway. It is what it is.

Not only am I part of the pageant world, I’m a part of the kiki ballroom scene. Pageants require us to have a certain level of poise and in the ballroom we get to let that poise go and let them have it.

How has your style evolved?

Even though I claim to be a pageant girl – and I cling to that – I love experimenting with some bullshit. One time I took an old motorcycle apart and I made a costume out of the parts. That has always been me. That’s why I love the ballroom scene because it allows me to do these creative things.

Were you always good at sewing and constructing things?

How did you feel getting eliminated in the hybrid Cousin It/Chun-Li look?

That wasn’t the original idea. The original idea was Cousin It and – as Brooke Lynn hinted – the front was supposed to have been Morticia [Adams] and I didn’t have time to finish it. I had to whip up something from my childhood really quickly and Chun-Li became it. Growing up, my cousins every hour of every day of every second were playing Mortal Kombat, Street Fighter and Super Mario Bros. This is what happened in our home. I didn’t play much of it, but I was around it all the time.

Did you always pick the female players in the fighting games?

Of course! I won’t even lie about that bullshit. Playing Mario you wanna be the princess. Why? I don’t friggin’ know.

The fact that he was hairy. And what was It?

Cousin It defied the gender binary.

How involved are you in the Toronto drag scene and do you want to perform more going forward?

I’m not involved in the Toronto drag scene at ALL. I won’t say it’s by choice – I just spend a lot of my time in the States. Pageantry is in the U.S., it’s not here. Part of being on Drag Race is interacting with the fans. I’m a people person and I’m a concierge by profession. I talk to people all day every day. It’ll probably be two years before I do another pageant.

Part of Drag Race involves people opening up about their personal stories. You brought a reality check to the workroom by opening up about hate crimes in the Bahamas. What’s been the reaction?

The love and support far outweighs the backlash. I’ve gotten people back home that said, “if he comes back we’re gonna kill him.” This one lady said,
“I wish the shots were fatal.” That is the mentality I was speaking about when I opened up with my story. Some of the people in my country declared that I was lying. These two individuals showed up on social media and proved my point so thank you. Thank you for proving my point and showing people that I wasn’t lying. The positive far outweighs the negative.

Do you hope your story will spark conversations in the Bahamas or elsewhere?

Back home, the conversation is already taking place. I’ve been on the cover of newspapers; I’ve been the topic of talk shows. Someone sent me a clip from a radio show the other morning. It is now opening the door for that conversation that should have taken place years ago. My incident took place seven years ago. If this conversation took place prior to that, who knows? Maybe the incident would have been avoided.

The people have spoken, and the proof is in the pudding. I rest my case and Im done with all of this. #noh8 #peace #love

What would you say to other queens who are going on Drag Race when it comes to opening up about really personal experiences?

When you walk into that workroom, you’re not going in saying, “Today I’m going to bare my soul to the world. Today I’m going to tell the entire world that I was shot.” That’s not something you want to do. I will be honest 100 per cent: that was one of the most difficult things I’ve had to do in my life. Even worse was when I had to watch it. I’m literally not in the headspace to see this right now. Even though I knew I’d said those things, it was hard watching it. Child, I would say just be prepared for anything, because when these conversations come up you don’t know who’s going to ask what. And you don’t know what your response is going to be.

Drag Race is a launch platform but the country is in different stages of reopening during the pandemic. How comfortable are you going out and doing things?

First of all, I absolutely hate corona. HATE IT. I’m a balls-to-the-walls kind of person. I’m 100 per cent comfortable with everything. I know people are going to say it’s irresponsible. Listen, if I’m gonna get corona – if fate said Anastarzia is gonna get corona – I could be sitting in my house and get it. I’m not going to be confined to a house, but by the same token I wear my masks and whatnot. I practice social distancing because you don’t want anybody to get corona. I’m expecting to do everything that Drag Race girls do. I want to go on tour, I want to meet our fans, I want to touch people. I want to use this platform to tell my story and inspire others. I want to do it all.