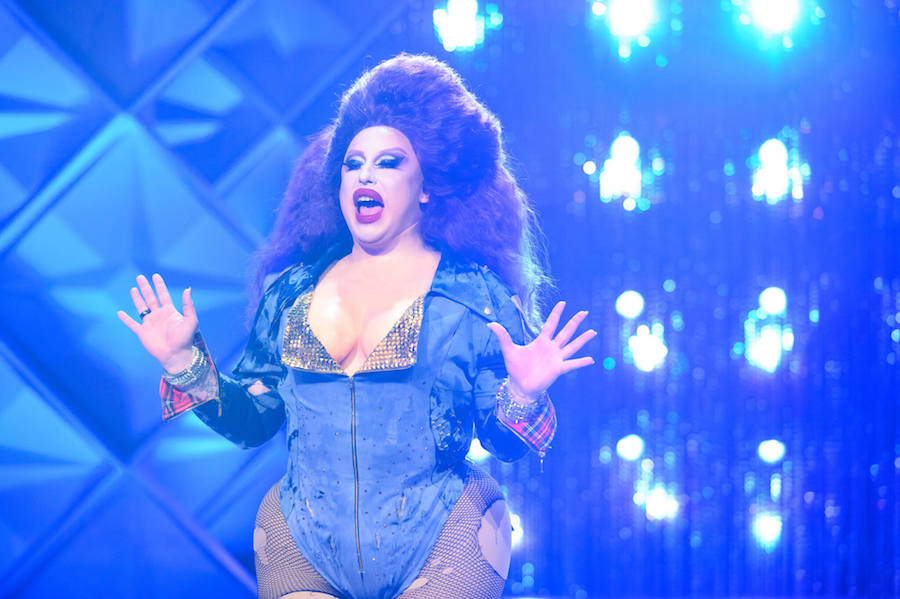 The shade on Canada’s Drag Race is getting more intense with each episode and BOA was hardly immune – except in one pivotal moment.

On episode 6, the judges asked the remaining seven queens who they think should go home. The drama-inducing query added fuel to what might possibly be the shadiest season in the franchise’s herstory.

To her own surprise, no queen said BOA’s name following the Star Sixty-Nine late-night infomercial challenge and the Canadian Tux-Shedo denim-on-denim runway. And yet, the Toronto-by-way-of-Windsor performer sashayed away from Canada’s Drag Race after a solemn lip sync face-off with Ilona Verley to Alessia Cara’s Scars To Your Beautiful.

Early on, BOA won over tough Drag Race judges Brooke Lynn Hytes, Stacey McKenzie and Jeffrey Bowyer-Chapman with camped-up runway looks that showed off her sense of humour. The positive reception didn’t go down well with fellow T.O. queen Scarlett BoBo, who described BOA’s episode 3 look as “a wig glued to a bodysuit.”

Though BOA won the The Nutsmacker ballet mini-challenge and delivered a memorable read of Lemon in the reading challenge, she got lost in the Snatch Game and Star Sixty-Nine acting challenge.

With many Canadian drag bars reopening after coronavirus lockdown measures, BOA has been touring to bars in Southern Ontario and Alberta. The day after her elimination, we caught up with BOA to talk about the fallacy of Canadian niceness, performing through a pandemic and if there’s such a thing as too much fringe.

My journey with drag: I was working at a place that I hated in Windsor, Ontario. I was miserable and I always liked drag queens. I would go out and would see drag queens perform. I never had the opportunity to do drag until I started watching YouTube videos on makeup. I started playing around and I decided I wanted to do drag. So I picked up, moved to Toronto and here we are.

Luckily I surrounded myself with some really good people. Obviously there were some closed-minded people, but I tried to stay as far away as I could. Some were family, some were other peers. But I had a really great time growing up for the most part. There wasn’t much of a [drag] scene, but there is now. It’s growing more and more. I’m really happy and proud that they’re doing that.

You’ve been traveling around Ontario to do club appearances since the show started airing. What’s it like doing drag shows during the pandemic?

I’ve done events with Troy Boy in Guelph and my friends Adam and Steve in Hamilton at Absinthe Bar. I went to Calgary last week. I was also at Crews and Tangos on the patio. It’s really nice because when COVID started progressing it was hard on us. Let’s face it, it’s a really horrible thing right now. Of course I get put on Drag Race and the world ends. We’re supposed to be traveling constantly, having all these amazing opportunities and meeting amazing people. A lot of us felt really robbed because of [the pandemic]. I felt betrayed by the world because we all worked so hard to get on Drag Race and up our games. It was very devastating.

It’s definitely different. We feed off the audience. We’re not able to have that crazy energy that we’re used to and there’s not as many people allowed in the bar because of social disdtancing. The good thing is people aren’t grinding up on you all the time and trying to get you sweaty and gross. So that’s kind of nice [laughs].

When you arrived on Drag Race, it seemed like you were presented as a comedy queen but that wasn’t quite right. There are these archetypes on Drag Race and you didn’t seem to fit.

I’ve always been an out-of-the-box kind of person. I’ve always tried to be versatile – bottom versatile – especially with my drag. I showed on the runway I can do glamour with my glow-up look, I can do comedy with my hair look, I can do camp glamour with my Celine look. I guess it would just be camp with my denim look because it was so huge. I’m really proud that I’m able to present myself as a multi-faceted artist.

What was it like being critiqued by the judges? The fandom seems to find the judging on Canada’s Drag Race particularly harsh – but you got some good critiques early on.

There’s like 12 girls – you’re getting to know the girls. [The judges] are getting to know the girls as well. They saw my personality, my goofy humour, my ability to not give a shit. I think they really, really enjoyed that. Once you progress in the season and they start to split hairs, it is easier to say, “We’ve seen that, let’s see more.” I love the judges. I think they are doing an amazing job. We’re all finding our rhythm here, so just go easy on them. Go easy on everybody.

I don’t know what they were talking about, girl. You know what’s funny is I was actually supposed to belt that outfit and I completely forgot because I was stressed out. So yeah, I just should’ve belted it. I belted it in my photo that was on Instagram and it looks great.

How shady was this season? People are talking about the judges being mean but it really feels like the shade is real among the contestants.

You pack 12 drag queens in a shoebox, you shake ‘em around and they’re definitely going to get at each other’s throats. There were some shady moments but we all love each other. There was no one in the world that was on Canada’s Drag Race season 1 except for the 12 of us and we really bonded over that experience.

Do you think any Canadian stereotypes will be subverted by this series?

What does subverted mean?

Like changing people’s expectations about what they think of Canadians.

Well, definitely we’re learning that not all Canadians are very nice!

I really liked your read of Lemon in the reading challenge: “Can you hold my drink? I need a coaster.” How did you prepare for that challenge? It’s an iconic one in the series.

I thought I was prepared. I had a lot more reads that were for some of the other girls that I started prepping but they unfortunately left. Or fortunately left! I had trouble putting those reads on the other girls, but what I did have was cute. I told Priyanka she was fake even though she’s not really fake. I was just being a turd.

Last night, when they asked the queens “who do you think should go home tonight?” a lot of people said Lemon. It felt like they were targeting a queen who was doing well in the maxi-challenges. Was that a strategy move?

What was Untucked like? That seemed a little intense.

It was tense and I felt bad because I love Lemon. We’re all in this crazy pressure cooker and I came for her a little bit and that’s not really me. I’m not like, “You’re a fuckin’ fake bitch Lemon!” Because she’s not. We didn’t know each other before the show. You’re going from never meeting a person in your entire life to being put in a pressure cooker with them for weeks. You’re going to get at each other’s throats but I did feel bad because she was crying.

I was excited for your lip sync and then it was an Alessia Cara ballad. What’s the art of doing a ballad lip sync on Drag Race?

I said in my first confessional, splits, death drops, high-kicks – I do none of it. I do splits, I do high-kicks, I do cartwheels. I was hoping for Avril Lavigne’s Girlfriend or something. I would’ve slayed it. I might be super out of breath afterward but I can do it for a short period of time. I would’ve definitely killed a more high-energy lip sync. It’s a beautiful song, but not my favourite song. Sue me.

On a more serious note, you came out as a sexual assault survivor on last night’s episode. Afterward, on social media, you said that was something you planned to do.

It’s not something I planned to do. I didn’t go in there like, “Oh, I’m gonna start to talk about my sexual assault!” But it’s something that happened publicly. Going in I knew that if it were to come up, I was going to share my story. I was going to talk about it, hopefully bring light to the issue of violence in the community, and use my platform in a good way rather than just slaying the runway.

Do you feel like anything has been lost in the conversations around #MeToo?

After telling my story on tonight’s episode, I wanted to take the opportunity to use my platform as a way to hopefully do some good. If you or someone you know may be dealing with abuse, please know that you’re not alone and there are resources out there to help you. Special thank you to @gladdaybookshop for allowing us to film in their space as well as donating to the Toronto Rape Crisis Centre. Video- @jborgy @canadasdragrace @rupaulsdragrace @worldofwonder @cravecanada @queerty @lgbt @boathedragqueen @logotv @trccmwar