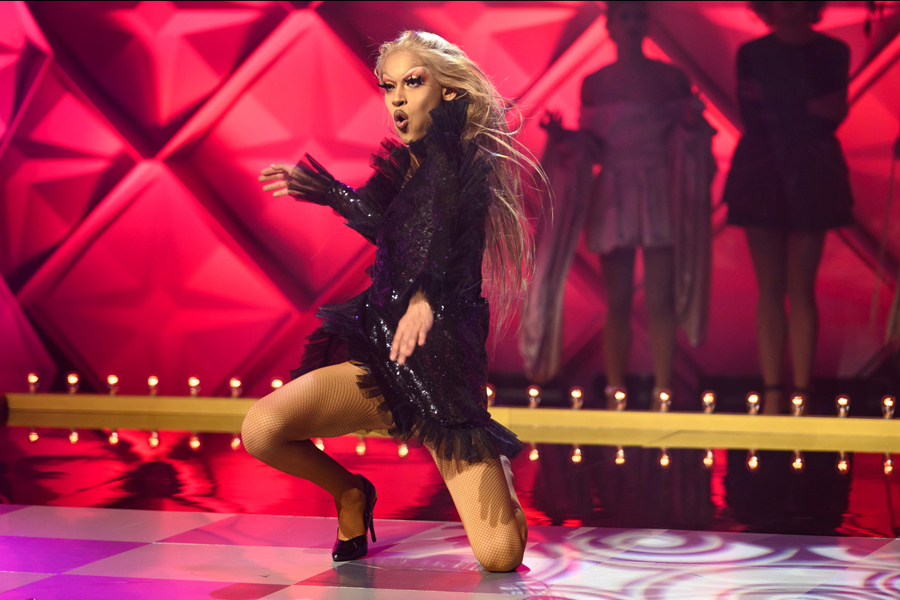 In over five episodes, Canada’s Drag Race queen Kiara proved she can sew, act, dance and rap with the best of them. (Comic impressions, however, might be another story.)

The two ended up lip syncing for their lives to I Drove All Night – a suitable choice for the Night Of 1000 Celines runway challenge (which, in this writer’s opinion, was long, long overdue).

Both pulled out every trick in their arsenal – death drops, cartwheels, tumbles, floor crawls – in a lip sync that raised the stakes even higher from last week’s Ilona vs. Tynomi showdown. It was a fierce fight – but in the end, Priyanka sent Kiara packing.

We talked to Kiara about how she planned out that final lip sync and where she went wrong in Snatch Game – and get a sample of her surprisingly stellar Stacey McKenzie impression.

How did you get into drag?

I started doing drag because I thought it would put all my passions together. I was always interested in the theatre, improv, dancing, makeup. I feel like it really just merged all my passions into creating this character, or this side of me I’m portraying. That was a little over two years ago. I started by performing in bars, and last year in August I started doing it full-time. I’m able to pay my bills and go contract to contract, being in drag three to five days a week.

How were you feeling about the competition going into Drag Race?

I feel like usually in competitions, people always tell me ‘Oh, you’re doing great!’ And they don’t have anything to correct about my drag – and then I never win. [laughs] So it was to be nice to have specific things that I should work on, get different opinions. And it’s nice to get perspectives of people from all different art forms.

Is there anything new you wanted to try into the competition?

I feel like I’ve done most of those things – not necessarily in drag, but I’m used to doing a lot of stuff.

At the same time, with impersonations – sometimes I would do Mariah during my shows, but it’s not the same thing to be funny in that character. I think this Snatch Game was one of the only things I hadn’t perfected or tried. But acting, being in front of camera, sewing, crafting – I’ve done that all before, too.

There’s a huge difference between doing a musical-oriented or lip sync impression and a comedy-oriented impression.

I like physical comedy, as well, and it’s easy to [pretend] to be condescending or extravagant, and it’s funny. But at the same time, with words, being on the spot, thinking of what [Mariah] would say that would be funny, is a totally different thing. You really have to be on your toes.

I was reading an interview about last night’s episode, and you mentioned that you were thinking of doing [Canada’s Drag Race judge] Stacey McKenzie.

That’s incredible. Also, when else in life are you going to get to do a Stacey McKenzie impression?

I don’t know – but if I ever have to be funny and do impressions again, I will for sure.

I think I didn’t do it because I wasn’t sure I was gonna nail it. I really should have done it. I should have trusted myself.

How were you feeling going into the lip sync?

Right after the Snatch Game, I knew I was gonna lip sync. I went back to my hotel room, put the song on blast, wrote out on a sheet of paper all the tricks I can do, and just did them all. I was so focused, and I was really hoping for a double safe. I knew if I was against Priyanka, I really had to hope for a double save, because she already had a win, a main challenge win and a mini challenge win. Just logically, it would make more sense to keep Priyanka. So I really wanted to make sure there was a double safe. It didn’t happen, but I did leave with a bang.

It was really clear that you had a huge level of performance ability. I was thinking about how much of a shame it is that the show often limits lip syncs to eliminations – that you have the ability to go completely insane in this lip sync, and yet you only get to see that right before the person’s being sent home.

In the girl group challenge, when it was my turn, I could have gone all the way. I could have served at least one trick or two. Even in Season 12, with the rap challenge – Widow Von’Du doing contortions and splits and stuff, and Heidi N. Closet doing the thing on the ground and stuff, everybody going full out.

I was like, “I should have gone all out too,” because I know I can serve that level. but at the same time, I remembered thinking I wanted to save my move for a special weapon. Like, I kind of wanted to stay under the radar – not for the judges, but for the other girls, so that they were surprised if they had to lip sync against me.

No! It did not! I think I should have gone full out from the get-go. What I learned is that every moment counts, and you never know when you’re going to be in the bottom. You have to always make sure that you’re outstanding. So if you have to do a double somersault on the runway anytime you just do it.

I’ve been reading some reviews and fan comments, and some people feel like you didn’t get a lot of airtime this season, and that people didn’t get to see enough of you. Do you agree with that? Was there stuff you wanted to show the audience more of this season?

Some episodes I feel like I could have had more airtime, of course – but I do feel like I always had a memorable moment. If it wasn’t in my confessionals, it as a one-liner I dropped here and there – “Miss Safe At Large”, “Kiki wanna kaikai”, the acting challenge, Maison Boraga. Every episode, I feel like there was something. I do feel like I left my mark on the show – but in the moment, maybe I was really focused. I don’t know! I’m not blaming the edit – I feel like they did show me in a good light.

Last week, Tynomi said she felt like Montreal was more of a “what you see is what you get” place – if you’re good, you get booked, and if you’re not, people will be straight up with you about why. Meanwhile, Toronto can be a little more competitive, maybe even adversarial. Do you agree?

Tynomi explained it in better words than I have in all these interviews. In Montreal, or in Quebec in general, if you’re good you’re get booked – and if  you’re not good on stage, you might not get booked. We really put performance to the front. Yes, there are look queens – but they’re not getting booked if they can’t perform. When I came into this scene, I felt like people saw that I wanted to work, that I was getting better and that I was easy to work with, so they booked me.

I’m a creative person, so I have a lot of ideas and stuff. I feel like I still need to digest what’s going on right now, all the new things coming my way. But I’d love to work on some music, use my filmmaking background to make some new video projects. I’d love to go on tour when this COVID thing is over and meet people that support me around the globe. I can’t wait to just get better at drag and keep elevating myself.