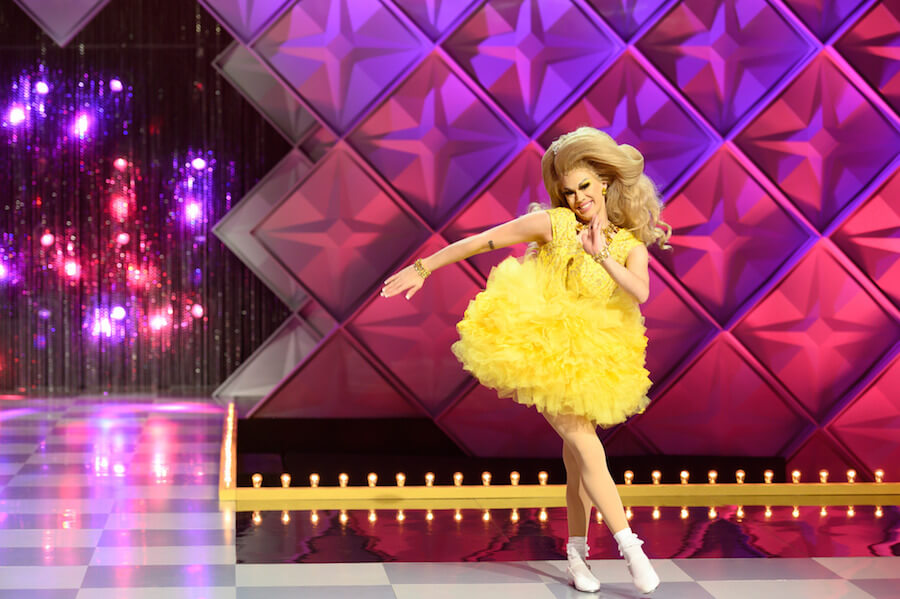 Lemon wowed the judges with a child beauty queen look.

Lemon was the sole U.S.-based competitor on the inaugural season of Canada’s Drag Race. A dancer from a young age, she moved from Toronto to New York City at 19 to study at the prestigious Ailey School and entered a drag competition on a whim.

She had done drag for two years before getting a spot on Canada’s Drag Race and made an impression from the jump by landing in the bottom in episode one. Lemon quickly rebounded, winning the Her-itage Moments maxi-challenge in episode 2, and went on to steal all her scenes in various acting and improv challenges. Her impersonation of Dance Moms star Jojo Siwa in the high-stakes Snatch Game was a season highlight, but she lost to Jimbo’s equally impressive Joan Rivers.

Judges Brooke Lynn Hytes, Jeffrey Bowyer-Chapman and Stacey McKenzie frequently praised Lemon’s acting chops, but had less kind words for her runway looks. They read her for not wearing padding on more than one occasion and Hytes essentially said her denim-on-denim look should have been a completely different outfit.

That particular look also led several queens to tell the judges she deserved to go home, leading to the most a contentious backstage exchange of the season to date. Despite winning the pageant challenge with her child-beauty-queen runway, she flopped in episode eight’s makeover challenge and was sent packing by Rita Baga after a lip sync to Alanis Morissette’s 90s mega-hit You Oughta Know.

The morning after her elimination, we caught up with Lemon to talk about her affinity for child dancers, drag silhouettes and her long-term relationship with the colour yellow.

I’ve always been a performer and I’ve always been obsessed with all of the things that make up drag. I loved playing dress-up as a little kid and I was obsessed with Pocahontas’s wig. I just love self-expression and I love queer identity. When I was living in New York I was broke as a bad word. I needed to make a dollar. I saw a drag competition that had a cute little prize. I thought, “Maybe I’ll enter. I’ll win. It’ll be so easy, no big deal.” As soon as I started preparing, I was like, this is hard as hell. I just fell in love with it. I’m a Virgo so I love being in charge and I just needed full, complete artistic control over everything. Now I have it.

Where in Canada are you from and how did you end up in New York City?

I’m from Toronto. On my 19th birthday I moved to New York City to go to the Ailey School. I did two years there in the scholarship program and studied ballet, modern dance and contemporary.

What are the similarities between the dance world and the drag world?

There are a lot of similarities but the main difference is that in the dance world people start when they’re young children. There’s just a different set of rules. The way you take critiques is ingrained in you as a child. Drag queens can come from any age and any person can do drag in my opinion. The main similarity would be it’s all artistic expression and it’s what you need to get out of your soul.

Is that why you did Jojo Siwa from Dance Moms in Snatch Game and then a pageant kid in the pageant runway?

I love Jojo Siwa. She was so cute on Dance Moms and was such a sweet little angel. Dance has shaped the person that I have become. Dance has been such a big part of my life since I was a teenager and even before that. It was what I always wanted to do. I did it and I am still doing it and now I just wear a wig while I do it. Pageants and Jojo Siwa come from my love and my experiences. 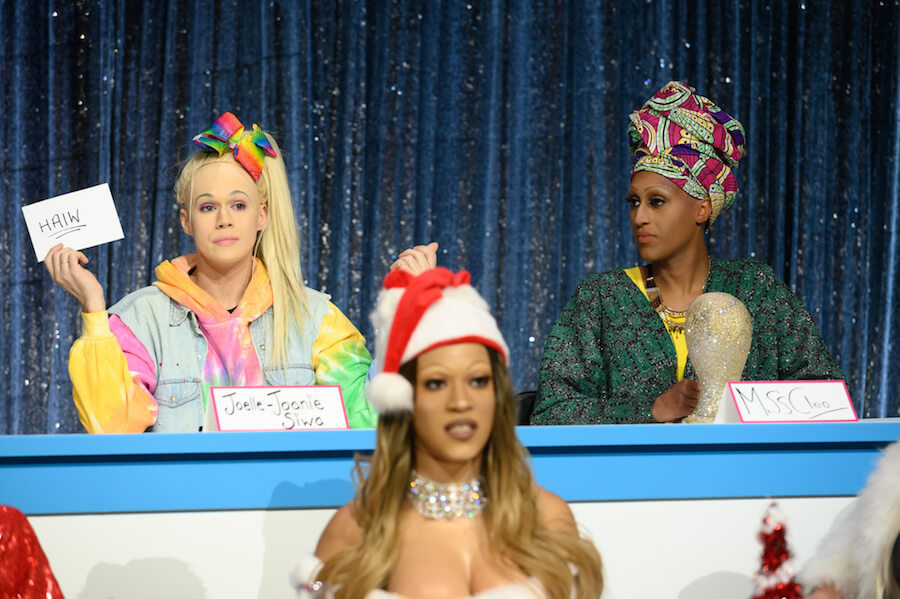 Lemon (left) got high marks from the judges for her Jojo Siwa impersonation on Canada’s Drag Race.

I got the impression you related to these kids.

Oh I definitely did. I love Toddlers & Tiaras so much. I just think they are the cutest things ever. I think it’s outrageous to put your child in that and make them parade themselves on stage, but I also feel like I would probably do it if I was a parent [laughs]. Those kids put themselves in drag. That is drag. You cannot tell me it’s not.

The photographer Nan Goldin has said – I don’t remember the exact quote – that drag queens and children have a lot in common, namely they have no filter. Is that part of the appeal of drag to you?

One hundred per cent. I was in the dress-up drawer and put mops on my head when I was three years old and doing Lizzie McGuire’s full Italian number and look how far it’s gotten me. Toddlers, children and drag queens all have that in common. It’s artistic expression and drag is unstoppable in that way. You can’t even control your own artistic output.

You grew up competing. What was your approach going into Drag Race?

Drag Race is a different beast. Anything could happen at any time. I mentally prepared myself to go home first and I prepared myself to make it to the end. It’s about the small details, the other people in the room, your mood that day – so many things contribute to how well you do or how not-well you do. I’ve been preparing myself since I was 10 doing questions and answers with the judges.

What did you learn about yourself while being on the show?

The main thing I learned was that having no fear about things is the best way to handle yourself. Truly, I think that was what led to my success on the show. I was so ready to make a fool of myself, embarrass myself and go so balls-to-the-wall insane that I could’ve been the worst. I was so committed to being insane. Doing Jojo Siwa and things like that was a big learning curve for me. You can’t tiptoe around the ideas. You have to serve it all the time.

You had an intense Untucked in the episode that everyone said you should go home. Can you talk about the dynamic with the other queens? Did the fact that you were coming from New York and the show has a heavy Toronto presence affect the dynamic?

For sure. Almost all the queens knew each other and had worked together. And the Toronto girls had worked together a thousand times. I was an outsider in that way. I had never met any of these queens except Tynomi Banks. When I was 18 I did back-up [dancing] for her. I wasn’t even a drag queen at that time – far from it, in fact.

There was just a level of unfamiliarity with me and I think the queens were rooting for their friends as I probably would’ve done. There definitely ended up being some tension, but it’s all resolved now and we’re all good Judys. If anything, that pushed me to work even harder and prove everyone wrong.

The general consensus among the judges was that you were excelling in the acting challenges, but they ripped your runway looks. The continuous critique was your lack of padding or body silhouette. What did you make of those critiques?

I think that drag has evolved past the point of the classic drag silhouette being one thing. When I see women, I don’t think of them as less than or less beautiful because the shape of their bodies are different. Mostly people online were saying, “Well, they’re critiquing your drag body not your real body.” It almost gives permission for people to look at real bodies and think these kind of thoughts. The judges are asked to critique us and are asked to better us. Part of their job is to break down every little thing about every girl. At the end of the day, I signed myself up to get critiqued. I can’t be upset about any of it. I was able to share my piece and that’s all I can do.

The pageant look brings me so much joy. It was one of those things – every time someone in the work room looked at me they would start dying of laughter. I truly looked like a five-year-old. It’s so stupid but glamorous at the same time. That’s very much what I love.

My Celine look was probably my worst runway look. Was that my first choice? Maybe not. But did I do the best I could and love the outfit for what it was? Absolutely. It was an exact recreation of what she did so I’m just booting her outfit.

What would be your first-choice Celine look?

She has so many incredible Paris Fashion Week looks. There were a lot of looks I wanted to recreate that I couldn’t afford. I didn’t have the means to recreate them – some production issues. I’m happy with what I did wear and it was an iconic Celine moment in time.

The show has this emphasis on being vulnerable. Do you feel like it’s worth opening up on a TV show?

The moments I had that I felt were particularly vulnerable, those moments did come out of the truth, the stress and the honesty that has to happen. We are looking so deeply into people because drag comes from your innermost soul. It comes from your most artistic expression. That’s what your drag persona is. It comes out of nowhere but at the same time it’s very important to have visibility on issues, especially for queer people. Queer people need to know they’re not alone when they are experiencing thing.

For example, Juice Boxx in episode one had a panic attack. She thought that moment was embarrassing or less than to be desired. For a lot of people watching that was an authentic, beautiful moment where a lot of different things lead up to this moment in Juice Boxx’s true life that so many people can relate to. Sometimes things just have to happen.

How much of your drag is yourself versus a constructed persona? People think of drag as imitation, but lately it feels more like an inner expression.

I am impersonating a lot of things: people I’m inspired by; women I see in pop culture that I love or women I see on the street that I think are powerful. Lemon is my feminine side. Not every drag persona is a feminine persona. Lemon is her own thing and she just exists on her own. I used to play a little bit more with that. I think Lemon takes my feminine energy and gives it purpose and gives it a reason, which feels like a positive experience every time.

When you became Lemon were you prepared to commit to the colour yellow for a long time?

There’s something really nice when you show up to a club and no one knows who you are and then you say your name once and they never forget it because you’re in head-to-toe yellow. There’s times where I show up and people go, “Oh, you must be Lemon.” I am! It’s easy. I don’t like yelling in clubs. I just have to go, “Like the fruit!”