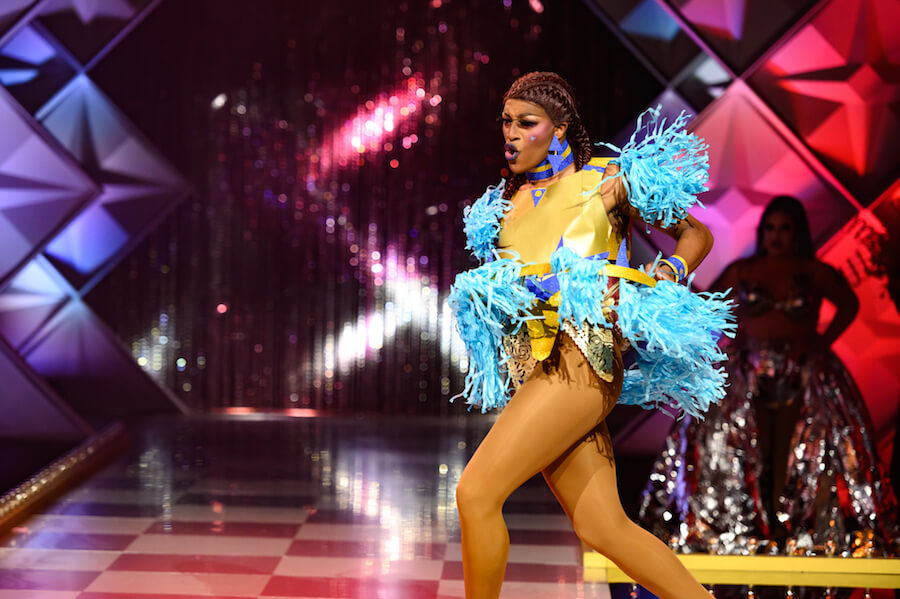 Some of the Canada’s Drag Race competitors might be new names to a Toronto audience – but Tynomi Banks certainly isn’t one of them.

As one of the city’s longest-performing queens, Banks has graced countless stages in the city – in addition to billboards and TV ad campaigns for Crest, Hudson’s Bay, Spotify and Netflix.

Banks brought that considerable pedigree with her into the workroom, but ultimately struggled in the competition. Judges Brooke Lynn Hytes, Stacey Mackenzie and Jeffrey Bowyer Chapman placed her in the bottom two for three episodes running – but Banks brought it in the lip sync battles, sending both Kyne and Anastarzia Anaquway packing.

Episode four challenged the queens to team up on fashion lines made with dumpsters full of recycled materials (a suitable pick for the episode’s guest judge, eco-conscious fashion designer Biddell). Banks teamed up with Jimbo and Ilona Verley for a paper-oriented collection featuring two knights and a regal queen – but the judges weren’t feeling the fantasy.

Verley and Banks were placed in the bottom two, and after Verley broke down out of reluctance to face off against her friend, the two put in a rip-roaring (literally, in the case of those paper costumes) performance of – what else? – Avril Lavigne’s Girlfriend. But Banks’ lip sync skills didn’t save her this time – a fact that had more than a few fans on social media crying foul.

We sat down with Banks a day after her elimination episode aired to talk about the high expectations for her run on the show, whether Toronto queens are really as catty as they seem on TV, and voguing to Avril Lavigne.

How did you get into doing drag?

I dabbled in it because of Halloween. Usually drag queens are made on Pride or Halloween, and I’m a Halloween baby. The first time I did it, I looked like Tina Turner – a young version. The next time I did it, I was more serious about it. My drag mother, Nicolette Brown, did my makeup. She was like, “You’re giving me Tyra Banks.” I’m like, “Really? Who else? Who else?” “Naomi Campbell.” I’m like, “We need to combine these names.” That was my first time in drag.

You’ve had a long, storied career in the Toronto drag scene and in entertainment – performing, being on billboards, being a backup dancer for Deborah Cox. Going into performing on Drag Race, what was your mindset like?

I was kind of not prepared. [Going into the competition], you design a plan around how you’re going to tackle it. I think I wasn’t going into it with a competition mindset – I thought I’d tackle it as I do a performance, and it didn’t work out in that way.

It was frustrating, because I was trying, literally, 1,000 per cent. All of a sudden you have to make clothes, act, sing, dance – all [coming] at you. The way the challenges were given to me – that was my demise

Yeah – a lot of crafty design challenges early on.

Brooke Lynn said she felt you were more of an entertainer, instead of someone coming in to compete. Do you agree with that?

I definitely agree – but you don’t know it until it’s happening. Looking back at it now, I can see why I was in my head: I’m trying so much to impress people [that] it’s actually sabotaging me, and I’m getting blocked by my own fears.

I was stuck in this loop, and I couldn’t just break free. But when I did break free, I was on what I knew best – those lip syncs. Fuck being in the bottom – but I was like, ‘No no no, I’m really good at performing.’ And I sent some girls home.

Being in that situation, you learn about yourself, too. It’s hard in the moment, because the cameras are on you 24/7, so people all over the world got to see me have that moment of self-doubt, break down, and then come back. So many fans wrote me like, ‘I’m on the edge of my seat! I’m crying!’

A lot of the queens mentioned on the show that they really looked up to you. Did it make things tougher – from a judging perspective, or just for yourself – that you had this rep to live up to?

I don’t want to say I knew exactly what was going on, but there was a feeling in the air [that I was being singled out]. I’m not going to deny it, because the Twitter fans are literally calling it out, like, “Justice for Tynomi!” Also, [people] see me in the clubs and see me perform, and they’re like “Oh, it’s going to translate to the show” – and it just didn’t.

Why do you think that was?

I don’t know, actually. I know I went 110 per cent. Were they hard on me? Even you asking that question – the reason you’re asking is that you probably think so.

I felt it a little bit too, even in their comments. Like, when Brooke Lynn was like “Are you okay?” Like – don’t ask me that! I’m looking down trying not to cry! You know that moment where you’re having the bad day and that one friend that you trust goes, “Oh, hey, are you okay?” And you just explode.

In the episode there’s a little bit of friction between some of the Toronto queens. I’m sure that gets amplified on TV because the workroom is such a weird bottle, but is it that intense in real life?

You mean Rita’s comment [“This is not Toronto’s drag race?”] She and I have worked together for three years, and I get along with people who tell the truth – who are just honest. The fact that she noticed it – I notice it too sometimes.

It’s not like a bullying thing – it’s more fun. But Montreal’s very different. They’re like, “If you’re good, you deserve it. If you’re not, they’ll tell you to try harder and practice.” It’s very black and white. Over here it’s like, “Oh girl, I got this gig – why weren’t you on it?”

It’s a totally different thing. I seem to fit in the middle, where I just don’t say anything. You show your worth and you prove that. I’ve never had to put anyone down – I just do what I do.

Who would you have been for Snatch Game?
Grace Jones.

That would have been so good!

I don’t know how to do impersonations, so it would have been so funny. It’s tearing me up that I’m not there.

Are there any new things you tried during Drag Race, or would have liked to try in the future?

I’m for sure going to continue doing music. I never dabbled in it – I just joke at my shows and sing on the mic. But making that song with Ralph was a beautiful process. I got to do lyrics that represent me and then put it into an amazing beat. I was literally obsessed right away. And it was so fun – that song’s so catchy.

The other thing is sewing. I’ve only had two lessons so far – but literally, if I didn’t have a time limit, I would like it a little bit more. You know when you got to an expensive shop and you’re like “Mm, you know what, I could just make this myself – it shouldn’t be $1,000”?

For the record: I thought your and Ilona’s outfits were cute!

Hey, it was cohesive. That’s what I’m going to say. Literally, I don’t believe we should have been in the bottom. I respect the judges – but do I agree with them? Hell no.

Respectful dissent is key to democracy.

And I think it was hard! All of us did amazing at the challenges. I just don’t believe I – or my group – should have been in the bottom.

This lip sync was my favourite so far on the show, and I think it’s because you were both clearly having so much fun. It just seemed so joyful, coming from this moment with everyone emotionally going through it – to “Fuck it, we’re going to rips chunks off our costume and use them as pom-poms.“

Literally! We were fighting for the same thing – to be there. But the connection we had – you were right. There was some type of energy. Even seeing it on the show last night I was like, oh my gosh. And then, me voguing and throwing pieces everywhere! I’d never performed Avril Lavigne in my life – so I’m going to have to look into it a little bit deeper.

You voguing to Avril Lavigne should have been a Canadian Heritage Minute.

The world was shook.

As a viewer, I think my favourite lip syncs are the ones where the queens are having fun together and playing off each other. You’re out to outdo each other, but it’s more of a friendly back and forth. I was like – can this be a ‘Shantay, you both stay’? Is this RuPaul’s Best Friend Race?

Plot twist! I really needed that to happen. Deep down I was like, “We really killed this, this is going to be such a hard decision.” But whatever – I’m out. The whole world is very much on the same page as you – that I shouldn’t have been in the bottom.

What’s next for you after this?

I’m going to do that music thing. You only live once.