The country's 150th birthday has inspired innovative – and subversive – ways of rethinking our history. As we mark National Canadian Film Day 150, NOW looks at what’s made our country’s cinema unique – and how, thanks to a new generation, that’s changing. 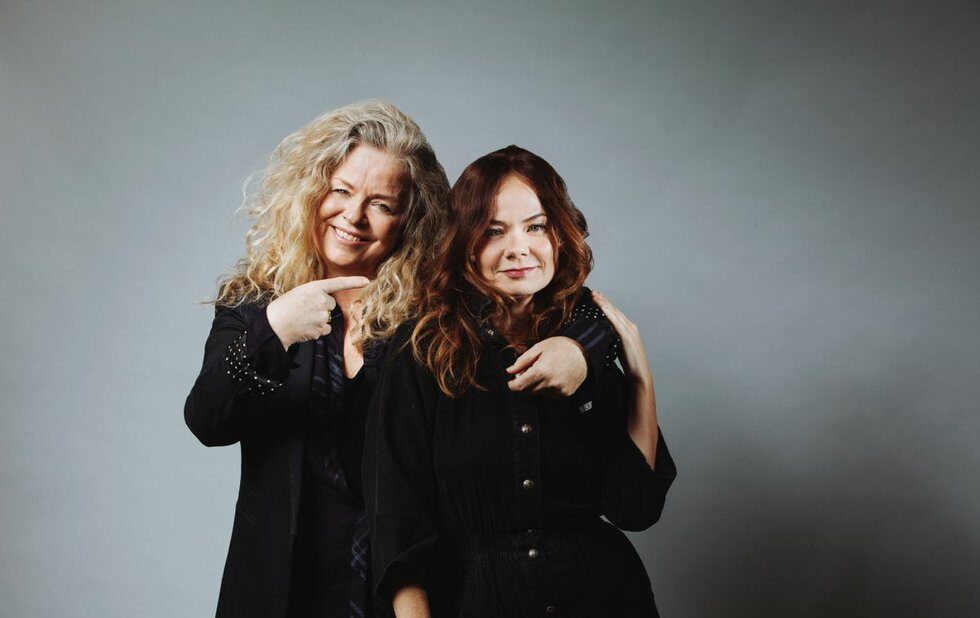 Photos by Tanja-Tiziana. Hair and Makeup by Sarah Campbell.

In NOW's Canadian film exhibit, actor/director Nadia Litz (right) expresses her admiration for the way Patricia Rozema always makes women the subjects, not the objects, in her movies.

When Ron Mann isn’t making movies, he’s releasing them. The Toronto documentarian – one of the very first Canadian filmmakers to be featured on NOW’s cover, all the way back in November 1982 – co-founded the distribution company Films We Like a few years back,focusing largely on documentaries and independent art cinema. Its latest release, I Called Him Morgan, opens Friday (April 7) at the Hot Docs Ted Rogers Cinema.

Earlier this year, Films We Like acquired Daniel Warth‘s new feature, Dim The Fluorescents. The arch drama, which won the narrative feature grand jury prize at Slamdance in January, charts the travails of two Toronto actors (Claire Armstrong and Naomi Skwarna) who tackle corporate training sketches as though they were performing Strindberg or Ibsen.

“I loved it,” Mann says. “And what was shocking to me,” he laughs, “was I knew none of the actors or the director or the crew!”

It’s not that Mann is out of touch, mind you he probably sees more Canadian movies than I do. But it’s becoming very difficult to keep up with the wealth and breadth of filmmaking talent exploding out of English Canada, and Toronto in particular.

There’s a new wave happening, and we’re smack in the middle of it.

Ever since NOW launched in 1981, we’ve kept one eye on the unique nature of our homegrown cinema. This month, we’re celebrating that legacy with a photo exhibit of 29 of our favourite Canadian film covers at Brookfield Place, annotated by a new generation of filmmaking talent.

And with National Canadian Film Day 150 preparing for its most ambitious screening slate yet on April 19, there’s no better time to consider how we’ve arrived here from the Toronto new wave that launched Mann, Atom Egoyan, Patricia Rozema and Bruce McDonald.

“We were all working on each other’s films,” Mann recalls. “It was completely different from today there were just a few filmmakers, we all knew everybody.”

They’d bump into one another in the lobby of Film House, the old post-production facility on Adelaide East. (It’s now a condo site, because Toronto.) And they’d meet for breakfast at Zupa’s Deli on Adelaide West. Slowly, as projects like Mann’s Poetry InMotion, Egoyan’s Next Of Kin, Rozema’s I’ve Heard The Mermaids Singing and McDonald’s Roadkill rolled out into the world, cinema culture took notice. Something was going on. 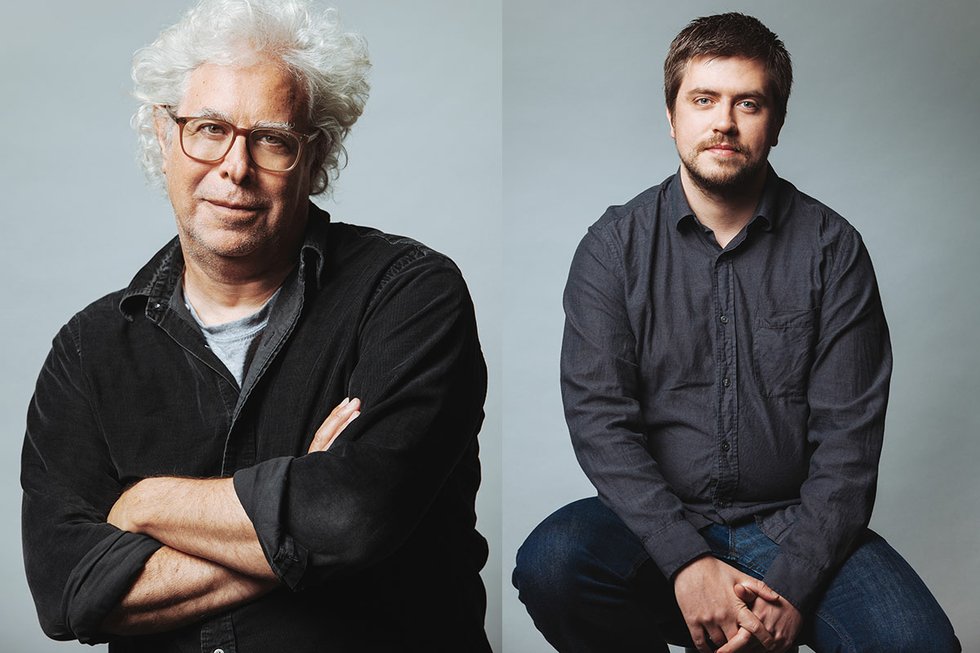 Filmmaker and distributor Ron Mann (left) has had a huge influence on The Stairs director Hugh Gibson, who writes eloquently about it as part of the exhibit Canadian Film NOW & Then, opening this week.

In the ensuing decades, Canadian cinema has experienced a near-complete redefinition, evolving from the devil’s handshake of tax-shelter productions to a distinct art form.

Well, English Canadian cinema, anyway Quebec’s always been slightly ahead of us on cultural and commercial impact, to the point where la belle province’s Denis Villeneuve, Jean-Marc Vallée, Philippe Falardeau and Xavier Dolan are now hot properties in Hollywood.

Now, three decades after the new wave, we’re seeing the crest of a new digital age, with young filmmakers who’ve grown up with HD cameras and inexpensive editing software.

“They’re savvy, because they can do it all themselves,” Mann says. “They have the tools to do it, and they have the courage to experiment with those tools. We used to have to pay for film stock!” he adds, laughing.

But there’d be no point in watching these movies if they didn’t have stories to tell, and that’s where our directors seem to be distinguishing themselves.

That specificity runs through the history of Canadian cinema. Rather than compete with Hollywood, filmmakers like Egoyan and Rozema burrowed inward, telling smaller stories – and that focus inspired people like Don McKellar, Lynne Stopkewich, Clement Virgo and Jeremy Podeswa to make their own movies in the 90s.

Toward the end of that decade, Vincenzo Natali‘s Cube and John Fawcett‘s Ginger Snaps reminded the world that we were still pretty good at genre stuff, too. And more recently, with Goon and The F Word, Michael Dowse has emerged as the nation’s premier mainstream filmmaker.

But he’s out there pretty much on his own. These days, Canadian cinema is defined by its modesty.

And right around the same time – perhaps nudged by Sarah Polley‘s radical act of carving out a second career path as a filmmaker – actors like Ellen Page, Nadia Litz, Connor Jessup and Katie Boland have started to flex new muscles, defining themselves as writers, directors and producers in addition to their work in front of the camera.

The new digital cinema also makes a virtue of its limitations – which is something filmmakers have always done, but now it feels like an active part of the aesthetic.

“We’re always trying to get the most production value we can out of the money we have,” says Moondi, co-director and co-writer of the 2015 character study Diamond Tongues, which stars Leah Goldstein as an unmoored actor spiralling into self-destruction.

“There’s a sequence in the film we changed from a radio interview to the set of Strombo Tonight in the hopes of making the film feel like it cost a lot more than $60,000.”

Budgets will always be an issue. As more money flows into TV, with producers and networks chasing the next binge-worthy social-media sensation (will it be CBC’s Anne or CTV’s Cardinal?), it’s even harder for indie features to get noticed.

“It’s easier to subsidize the television industry because TV is more consistent and controllable,” says Radwanski. “Also, the majority of the creative control is held by the producers rather than the director. It’s not hard to see why the industry has shifted this way it’s hard to subsidize innovation, and frankly innovation is a requirement of good cinema.”

But that doesn’t mean these films just disappear.

The Other Half may not have had much theatrical play last December, but its arrival on iTunes last month meant that Maslany’s rabid fan base could finally catch up to it. The rise of on-demand and streaming services offers new life for dozens of movies – another benefit of the digital age. (Adrianna DiLonardo and Sarah Rotella released their first feature, Almost Adults, directly to VOD, bypassing a theatrical run entirely.)

“I think it would be fair to suggest that the commercial prospects for English Canadian cinema have always been relatively modest and difficult to capture,” says Jennifer Liao, director of the workplace apocalypse comedy End Of Days, Inc.

“It’s certainly beyond challenging nowadays, in a world of seemingly infinite entertainment options and the dominance of TV series, to vie for the attention of audiences potentially interested in our small and scrappy films,” Liao says. “Festivals are now where a small Canadian film might find its largest theatrical audiences, and the digital release is now crucial to whatever life it will continue to have.”

While it’s true that the VOD world can be a sea of generic poster art and indistinct titles, it also removes one of the biggest perceived stumbling blocks to watching a Canadian movie: its identity. On a Netflix menu, no one knows you’re Canadian.

“I think that what is hopefully true about the people that are coming up now is that we’re talking less about what is a Canadian film, and we’re talking more just about filmmakers who live in Canada,” says Klein.

The Other Half is set in Toronto, but not insistently so, and co-star Cullen uses his own Welsh accent to play a recent arrival to the city. It’s about people, not places.

“I’m privileged to be a Canadian, but I’m a filmmaker who tells the stories I tell because of my obsession or my own broken heart or my own need. I think that was a conversation that happened more often before, and it limited what could be.”

“These are Canadian movies because they’re made by Canadian filmmakers,” Klein says. “And I love that. The internet is a horrible place, the world is going to shit, and progress doesn’t necessarily lead to happier people – but one thing I do think, in terms of that reality, is that we’re living in this globalized world. My films are made as a response to the world I live in, not the country I live in.”

For his part, Mann – who released Old Stone – is eager to see what emerges next. “It’s encouraging when you see great work from extremely talented filmmakers who are just starting out, and it’s also bold and original work.”

Don’t miss: the best Canadian movies of all time