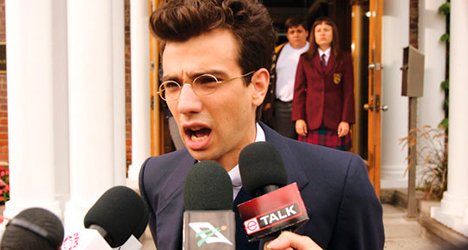 As you’re no doubt tired of hearing by now, I spent most of last fall as a juror for Canada’s Top Ten, the TIFF group’s annual evaluation of Canadian cinema. The 2009 honorees were announced in December, and this week they’re being screening in a special program at TIFF Cinematheque.

Most of the 2009 winners haven’t yet opened theatrically in Toronto their only playdates thus far were at TIFF in September. Jacob Tierney’s The Trotsky (screening tonight [Friday] at 9:15 pm), Bernard Emond’s La Donation (Monday, 7 pm) Peter Stebbings’s Defendor (Monday, 9:15 pm) and Matthew Bissonnette’s Passenger Side (Thursday, 9:30 pm) will all be opening before the spring is out, but if you want to see them early – and in the presence of the filmmakers – here you go.

(You’ve already missed Alexandre Franchi’s The Wild Hunt and Xavier Dolan’s I Killed My Mother, which screened last night, but they’ll be back soon enough Dolan’s film is set to open Feb. 5, three days after we find out whether it made the Oscar short list for Best Foreign-Language Film, and The Wild Hunt will hit theatres later this year.)

Similarly, if you failed to catch Ruba Nadda’s Cairo Time (Tuesday, 7 pm) or Denis Villeneuve’s Polytechnique (Wednesday, 9:15 pm) – just named 2009’s Best Canadian Film by the Toronto Film Critics Association – during their theatrical runs, this is likely your last chance to catch them on the big screen for a while.

As for the remaining features, Denis Côte’s Carcasses (Tuesday, 9 pm) seems like an awfully long shot for a theatrical release in English Canada, and last I’d heard Sherry White’s Crackie (Saturday, 9:30 pm) had yet to land a distributor, making these screenings even more valuable. I’d particularly recommend Carcasses, a defiantly unconventional study of a man who’s created a fascinating existence for himself within the boundaries of his Quebec junkyard.

Tickets are available through the Canada’s Top Ten website screenings run through Thursday, with Sunday dedicated to two programs of the anointed Canada’s Top Ten shorts. And tonight at 7 pm, there’s a panel discussion about walking the line between comedy and drama, “Seriously Funny”, featuring Defendor’s Stebbings, The Trotsky’s Tierney and Mark A. Krupa, who co-wrote and co-stars in The Wild Hunt, which kicked off the series last night.

I say “we” because I’ve been asked to serve as moderator. (One does try to help out wherever one can.) But it’s a conversation about filmmaking – and about the malleability of genre in Canadian film that isn’t always encouraged in other national cinemas – that I’d be keen to hear even if I wasn’t a participant. You might want to drop by, too.