Chinese-Canadian director captures the contradictions of a changing country 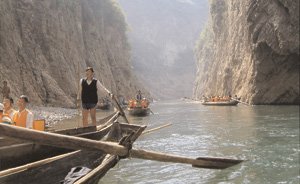 UP THE YANGTZE Directed by Yung Chang. Subtitled. 93 minutes. Screens Friday (February 1) as part of Cinematheque’s Canada’s Top 10 as a fundraiser for the Reel Asian Film Festival, Sunday (February 3) at the Empire Theatre at Empress Walk and Doc Soup, Wednesday (February 6) at the Bloor. Then opens wide on Friday (February 8). Rating: NNNN

When Yung Chang tells customs agents he was born in Oshawa, Ontario, they sometimes assume it’s a little village in Japan.

“Oshawa, you know?” he says, mimicking a Japanese accent by stressing the second syllable.

That’s just one of the many daily ironies of living as a hyphenated Canadian. Chang grew up the only Chinese-Canadian kid in his Whitby high school, and other students assumed his South Asian best friend and he were brothers.That dual perspective on life and culture has given him a career kick-start.

It’s part of the texture of his remarkable debut documentary feature, Up The Yangtze, an exploration of China’s controversial economic boom as seen through the eyes of two teenage workers on a luxury cruise ship going up the Yangtze River.

Much of the movie is concerned with the flooding and displacement caused by the Three Gorges Dam, which was captured in part by Canadian Jennifer Baichwal in Manufactured Landscapes and also more recently in Jia Zhang-Ke’s fictional film Still Life.

“Westerners and the Chinese see the dam differently,” says Chang, an admirer of both directors. “I think this film is somewhere in between.”

Chang is speaking on the phone from the Sundance Film Festival, where Yangtze has proved so popular, it’s earned an encore screening.

“I just said bonjour to Jacqueline Bissett, so that was very nice,” he says, astonished. “She looks amazing. Hot with a triple T.”

Chang’s interest in China goes back to reading Frank Chin’s myth-busting look at Chinese-American identity, Donald Duk. Chin got him to consider the difference between real Chinese and the fake Joy Luck Club stuff, and convinced him that the only way to get closer to his own identity was to go to China and to read and speak the language.

Chang made his first trip there in 1997. But his inspiration for the film came when he went back in 2002 with his grandfather and parents and travelled on something called the Farewell Cruise, a luxury package for Westerners.

“Initially, it started out as a film about the culture of tourism and the tourism of culture,” says Chang. “But it became clear that by including and focusing on the stories of the kids who work on the boat, I could use this ship as a microcosm to explore contemporary China. It was a fishbowl, and gives you Western perspectives, Chinese perspectives and my own duality between both worlds.”

The film focuses on two of the ship’s recently hired workers, the introverted Yu Shui, who comes from a peasant family whose home is being relocated, and Chen Bo Yu, a good-looking and arrogant kid – one of China’s “little emperors” or single sons – from a middle-class background.

“These two seemed to reveal the kinds of contrasts and issues that are afflicting their generation,” says Chang. “And, in documentary terms, great things happened to them in terms of their storylines, creating almost a fictional sense of storytelling.”

That’s an interesting point. Some scenes in the film seem almost like fiction. Chang chalks it up to asking the right questions and nurturing a sense of trust among his subjects.“It’s about building a friendship and trust. It’s important for filmmakers to know that when you work with a subject, it shouldn’t be this hierarchical relationship – you should be on an equal footing. And you don’t need to have the camera on all the time. You’re waiting for those key moments.

“I’m not a Frederick Wiseman. I don’t shoot 1,000 hours of footage and tweak out some sort of commentary. I think you have to be an active participant. I’m not going to shoot a family eating their noodles through the entire meal without talking. So I ask questions and they provoke conversations.”

In one unforgettable scene, Chang captures Yu’s emaciated father, a former coolie, as he straps a heavy cabinet on his back and walks up a precarious embankment.

“It was difficult for me not to put down the camera and help him carry it,” he admits. “But you’re in this position as a filmmaker. To find the greater truth for the film, you can’t interrupt it with a small gesture. That moment is much bigger, and it will resonate as something very powerful. These are the images that make people move to action. It’s cinema as a social tool.”

He’s not just talking the talk. The production company behind the film, EyeSteelFilm, has already raised funds to help send Yu to high school and to help her father, who’s unemployed, get an eye operation.

“I showed Yu and her family the film last summer,” says Chang. “She sent me an e-mail a couple of weeks later saying she could see her destiny or fate, so she decided to leave the cruise boat and go to high school and get a degree.”

On his own personal story