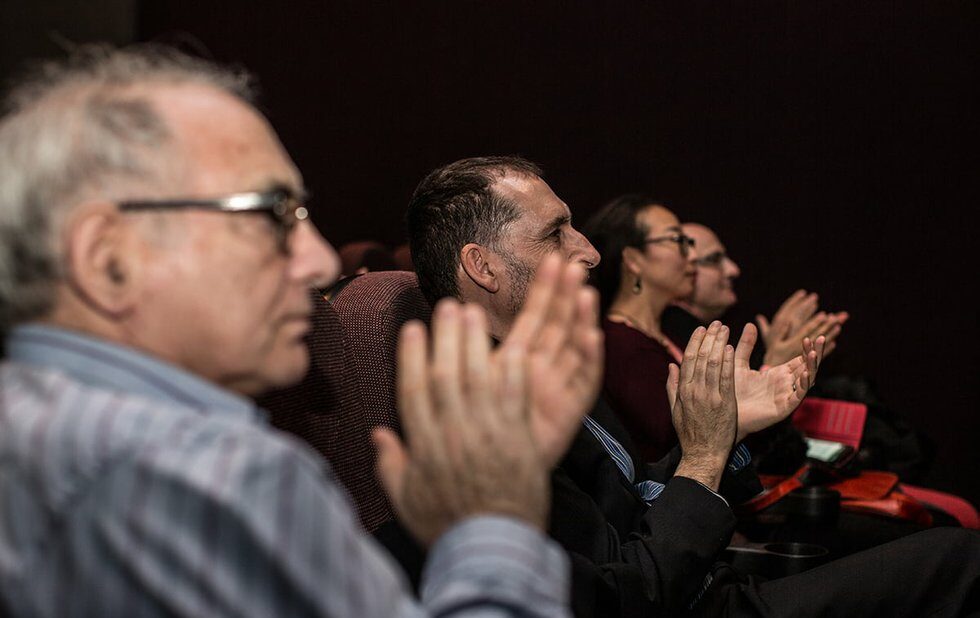 This years theme is a play on the psyche: thrillers and detective films take centre stage, while a touch of drama and comedy keeps us above water. A number of films grapple with a mind-bending combination of the genres.

Au Revoir La-Haut (See You Up There) touches down in 1920s Paris, where an accident in the trenches leaves a man disfigured. Edouard (played by Beats Per Minute star Nahuel Perez Biscayart) uses opium and creates flamboyant masks to hide his disfigured face. With the help of a former fellow soldier (Albert Dupontel), Edouard hatches a get-rich-quick scheme selling war monument designs, and then taking off with the money before building them. What ensues is a sonically-infused adventure with elaborate set-pieces and surreal costume design.

Thriller Petit Paysan (Bloody Milk) offers something darker. At a rural French dairy farm, hard-working Pierre (Hubert Charuel) faces his undoing when a widespread epidemic makes one of his cows sick. Desperate to do whatever it takes, Pierre embarks on an ill-fated path to save the rest of his herd.

Need a little cheering up after that one? Catch up with 1991 director Ricardo Trogi, who will attend the screening of the latest in his autobiographical film trilogy. The movie recounts Ricardos (Jean-Carl Boucher) light-hearted quest to find who he believes is the love of his life in Italy. The film is fun, fast-paced, and much like its director, never takes itself too seriously.

A tidy translation does not exist for the suspenseful comedy Le Brio (The Verve). Actor Daniel Auteuil plays controversial university professor Pierre, who gets himself in hot water after chastising law student Neila (Camelia Jordana). The school’s president catches wind of the situation and steps in, only to task the professor to mentor Neila for an upcoming speech contest. As Neilas speaking skills improve under Pierres tutelage, an unlikely friendship unfolds.

Noel en Boite (Christmas in a Box) is set closer to home in Northern Ontario. Sophie (Janick Hebert) is a TV star who finds herself in a precarious situation over the holidays when compromising photos of her surface. In an attempt to squash the photos, she offers the photographer (Zachary Amzallag) a quid-pro-quo in the form of an exclusive interview. Forced to face her painful past, the young woman invites the photographer to spend Christmas at her aunts house, where they close the deal. Director Jocelyn Forgues will be in attendance for the films second-ever screening.

Many feature films at Cinefranco are making their North American debut, including:

The shorts will all be screened on October 10 at 7 pm. Topics include existential crises, homelessness, transformation, community and the avant-garde. Brought to you in partnership with Ontario Creates, Le Labo and FRIC, this collection of short films is an exhibition of the work of top-talent Canadian film directors.

Opening with sci-fi thriller Origami and closing with comedy 1991, both from Quebec, Cinefranco features a diverse and engaging showcase of films that may otherwise never hit the big screens in Toronto.

For those fluent in French, Cinefranco offers free film screenings and post-film discussions at the following films:

Cinefrancos Youth Festival attracts over 8,500 students and teachers from over 100 schools in the Toronto area. The festival provides a playful and educational environment for students to gain exposure to the French language outside of the classroom. The next Youth Festival is set to take place February 19 to March 6, 2019.

The Quebec Perspective Festival, held every year over three days in April, is put on in partnership with Quebec Cinema. Local, national and international francophone cinema will be the focus, with many talented actors and directors also making appearances.