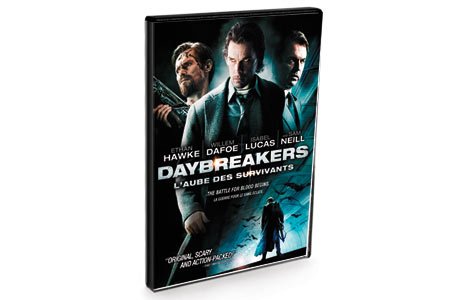 Daybreakers isn’t a great movie, but at least it serves up its vampires as something other than fantasy fodder for tweeny wankage.

In the near future, 10 years after a vampire outbreak, the bloodsuckers have won. Humanity’s tiny remnant is hunted and farmed for blood, but demand far outstrips supply, and blood-deprived vamps turn ugly and feed on their own kind. One researcher trying to make synthetic blood stumbles across a cure, but his corporate masters don’t want to know, which drives him into the arms of the human resistance.

It’s not the most elegant metaphor for corporate capitalism I’ve ever seen, but it does the job, particularly when the company goons round up the savage vamps for public execution.

Daybreakers offers handsome visuals and a sense of scale here and there, but much of it smacks of B-movie shortcuts. Brothers Michael and Peter Spierig discuss their budget and on-set bacterial infection problems in their commentary and extensive making-of doc.

Visual shortcomings aside, Ethan Hawke carries the show. He is believable as both serious researcher and action guy, and he’s ably supported by Willem Dafoe, the resistance leader, and Sam Neill, the smugly arrogant corporate overlord.