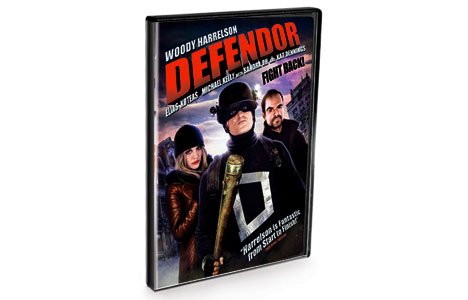 Arthur Poppington is what the filmmakers in their commentary call a retard: low IQ and socially inept. At night, he becomes Defendor, fighting crime in his homemade costume armed with an arsenal of marbles and angry wasps. His targets are a crooked cop and local gang lord. His allies include a good-hearted hooker and an honest cop.

The story and the tone fail to gel. Writer/director Peter Stebbings tells us in the commentary that he’s going for warm-hearted realism, but the ridiculous premise and implausible clichés of the superhero genre keep undercutting the emotion. Still, Defendor works well scene by scene. It looks good, and some of it is funny. Woody Harrelson (Defendor) and Kat Dennings (the hooker) have great chemistry, and Stebbings gives them room to develop their relationship.

He shares his commentary with Harrelson, Dennings and producer Nicholas Tabarrok. They joke and tell production stories. More interesting, they reveal that they think they’re supposed to be promoting the movie. Please, we already bought, rented or illegally downloaded the movie. We don’t need more hype.