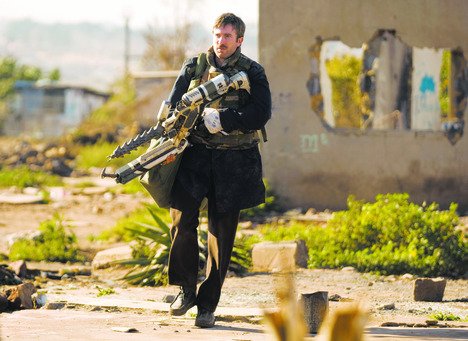 Twenty years after landing on Earth, alien refugees in a Johannesburg shantytown are being sent to a concentration camp. Low-level corporate drone Wikus Van De Merwe (Sharlto Copley) is in charge of the evictions. Things go horribly wrong, and Wikus goes from smug oppressor to hunted mutant.

Writer/director Neill Blomkamp gives his story a strong jolt of realism with an arsenal of documentary techniques that includes embedding his insectoid aliens and special effects in the filth of a real shantytown.

But it’s Copley as Wikus who really sells the story. He brings immense energy and complete commitment to a cowardly, pompous, thoughtless racist without turning him into a cartoon villain or trying to soften him. Not your usual science fiction hero.

Along with the expected production stories, Blomkamp fills his commentary with revealing remarks on science fiction films, Johannesburg and his own particular obsessions.