Including reviews of I Am Greta, Martin Eden and Werner Herzog's latest travel documentary 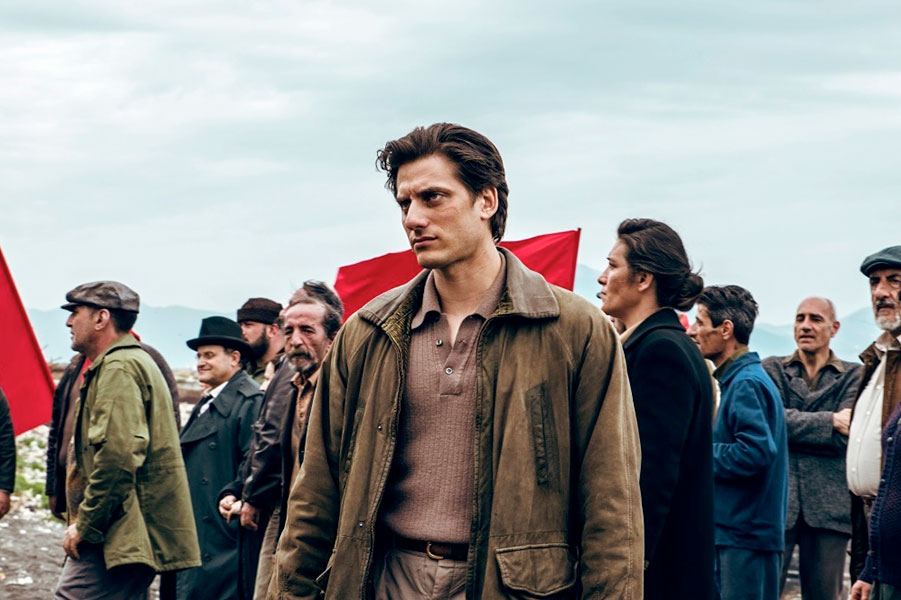 NOW critics pick what’s new to streaming and VOD for the weekend of November 13. Plus: Everything new to VOD and streaming platforms.

Italian director Marcello’s searing adaptation of Jack London’s 1909 novel speaks urgently to the ways poverty, class and free-market capitalism clear a path for self-serving, ideologically confused demagoguery. Martin Eden (Luca Marinelli) is a working-class sailor who is intent on levelling up by self-educating to become a writer, initially to impress his wealthy love interest, Elena (Jessica Cressy). Chided by both sides of the divide for selecting a financially dubious artistic profession, he succeeds but grows intensely individualistic. His intellectual acrobatics are infuriating but understandable thanks to Marinelli’s finely calibrated performance, which maintains Martin’s core righteousness as his upward mobility causes an existential crisis that hardens his political thinking.

The director must pull off his own balancing act between the thinness of his fairy-tale characterizations and heavy theoretical ideas woven in rather inelegantly compared with other aspects of the production. (Several philosophers are name-checked throughout.) He underscores the timelessness of this story by creating an ambiguous 20th-century atmosphere through DPs Francesco Di Giacomo and Alessandro Abate’s striking and saturated Super 16mm photography, and by mixing in archival footage and pop music that feel ironically nostalgic. Martin Eden does what few artists or commentators care to do: attempt to grasp at, rather than capitalize on, the fraught humanity and circumstances that lead to dubious politics. 127 min. Subtitles. Available to stream Friday (November 13) on digital TIFF Bell Lightbox. NNNN (Kevin Ritchie)⁄ 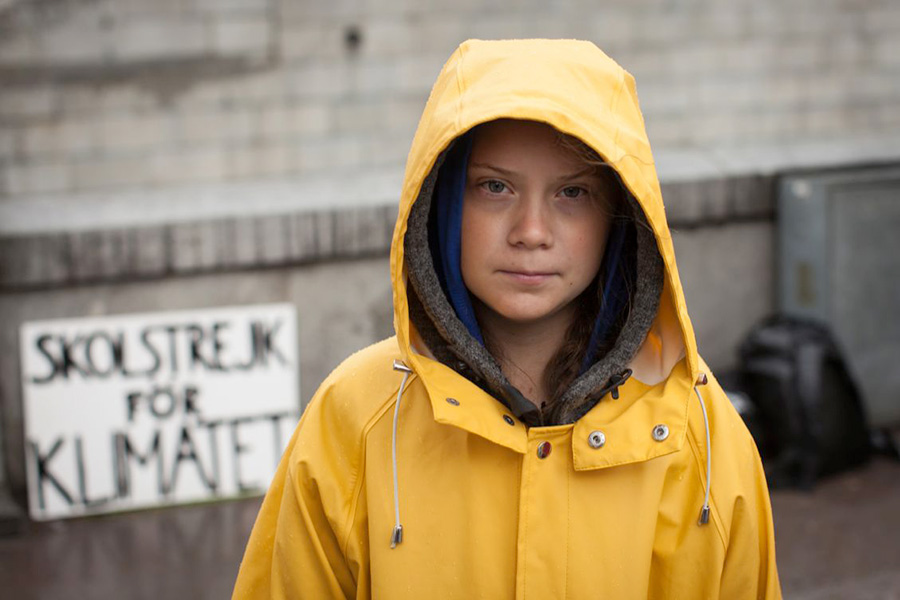 Greta Thunberg’s life feels like it was written for a film. The teenage environmentalist’s story, from her lone climate strikes outside Sweden’s parliament in 2018 to sailing across the Atlantic to attend the UN Climate Summit in 2019, is full of pathos, triumph, danger, death threats and breakdowns. Her speeches emboldened other young people to take to the streets and demand action to fix the world. Director Grossman captures the -humanity of her larger-than-life tale with an unnervingly- close look into her interior life. We’ve seen the viral speeches, but Grossman only includes clips of them. He is more focused on Thunberg as she reads hateful comments, listens to Trump and Putin spew venom about her and has anxiety attacks before addressing the UN, all the while grown adults ask her for selfies that she uncomfortably agrees to. We also see as she laughs with her father, dances in an empty room and grooms her dog, Roxy. She says living with Asperger’s keeps her hyper-fixated on the climate crisis.

Greta is an accidental hero of our times propelled to the world stage seemingly overnight, but that status suffocates and stifles her, as this doc highlights. She clearly feels an immense burden and responsibility but also seems uncomfortable being known so widely. Grossman positions her as a girl at odds with a hypocritical establishment. As all the summits and meetings with presidents and diplomats like Emmanuel Macron blur together, Greta feels burned out and used. The doc avoids revelling in the sappy, feel-goodness you might expect if a North American filmmaker were telling this story. As she sails from Plymouth to New York City to show the world how difficult it is to live sustainably, she’s not a triumphant champion but rather a girl on the edge of desperation, hoping someone will finally pay attention. 112 min. Available to stream on Hot Docs at Home and Crave on Friday (November 13). NNNN (Kelsey Adams) 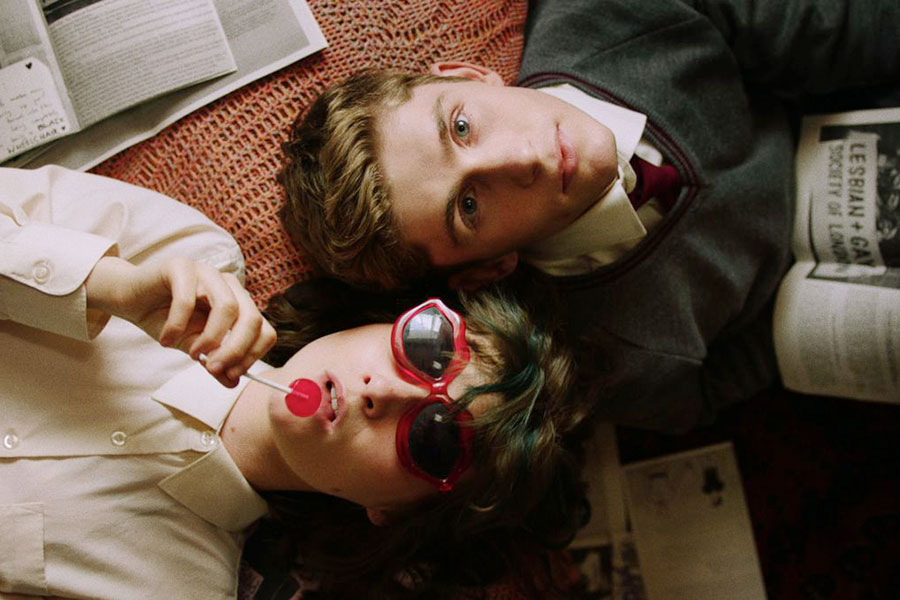 In 90s Ireland, closeted teens Eddie (Fionn O’Shea) and Amber (Lola Petticrew) arrange a fake relationship to put an end to rumours about their respective sexual orientations – and wind up getting entangled in one another’s lives in ways they couldn’t have expected. In a considerable pivot from his Ellen Page zombie thriller The Cured, writer/director Freyne gives his high-school dramedy premise a streak of rough anger that feels true to its repressed environment – we quickly understand why his heroes are so desperate to pass for straight – while still letting O’Shea (Normal People) and Petticrew (A Bump Along The Way) create moments of empowering connection. And the film builds a world around them that feels oppressive without overdoing it: Catastrophe’s Sharon Horgan and Extra Ordinary’s Barry Ward do a fine job of showing us how Eddie’s parents are aware he’s different, but not quite willing to investigate how. In a normal year, this would have been one of the biggest breakouts of the Inside Out festival… but this isn’t a normal year. But now that Dating Amber’s on VOD, the people who need it most should have no trouble finding it. 92 min. Now available on digital and on demand. NNNN (Norman Wilner) 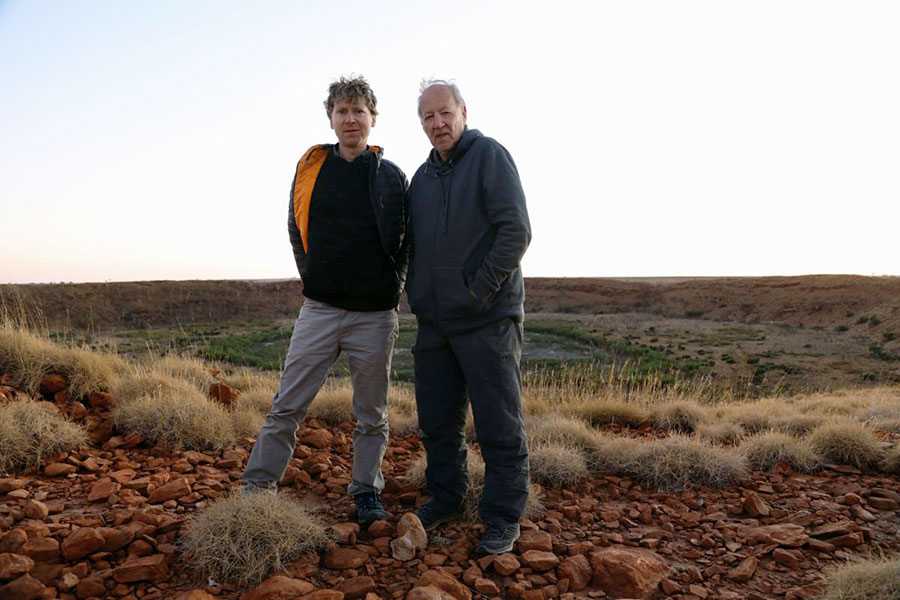 The latest in Herzog’s long line of globe-trotting documentaries about the natural world is ostensibly an investigation of humanity’s fascination with meteors and the craters they leave behind. Sharing directorial credit with volcanologist Oppenheimer, who previously assisted him on Into The Inferno, Herzog tours half a dozen meteor sites, talking to scientists and locals about their literal and metaphorical impact – and, because a Werner Herzog joint has certain expectations, occasionally grousing about the surroundings in his heavy Bavarian accent. (In Mexico, he notes that the Chicxulub crater on the Yucatán peninsula is “so godforsaken you want to cry.”) On the one hand, I can’t fault Herzog for finding a way to finance his curiosity. But as with many of his later documentaries – Into The Inferno included – Fireball feels somewhat tossed off, its occasional insights fighting to be noticed amongst a bunch of stuff Herzog thinks will please the punters who’ve come to watch him do his thing. The director’s access means he gets to see some interesting sights, and the researchers are clearly happy to talk to someone who genuinely listens, but there’s a lot of fat on this thing. 97 min. Some subtitles. Available to stream on Apple TV+ Friday (November 13). NNN (NW) 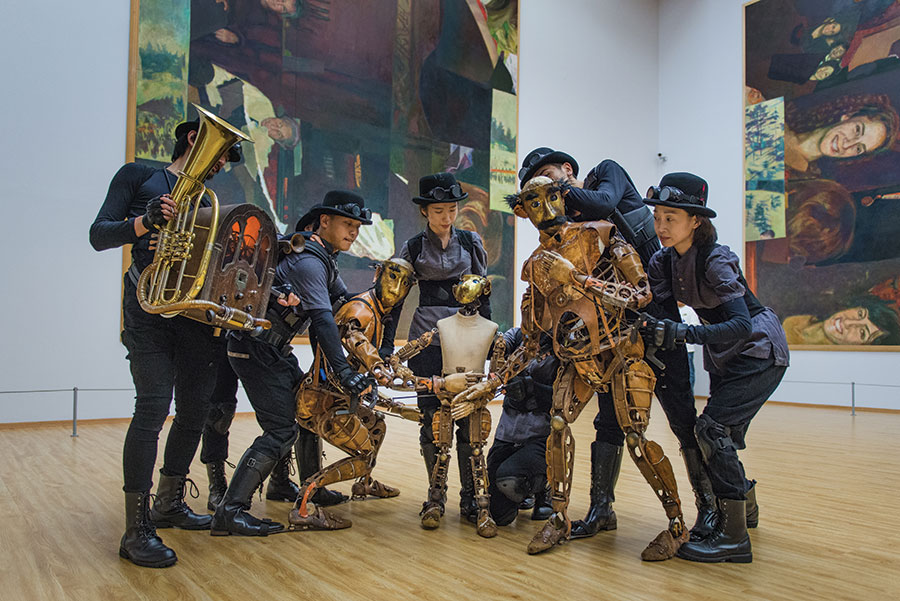 In Shanghai, visual artist Maleonn deals with his father’s Alzheimer’s diagnosis by writing and designing an ambitious puppet play about a son who builds his ailing father a “time machine” designed to recapture the older man’s failing memories. Maleonn makes things even more personal by asking his dad – the once-revered Peking Opera director Ma Ke – to consult on the production. Directors Yang and Chiang don’t do quite as much with this premise as they could have, getting lost in the abstractions of the show’s metaphor rather than crafting one of their own. The world Maelonn creates is beautiful and strange, its tactile clockwork design functioning as a physical analogue for the mechanics of the human brain, and I can totally understand why the filmmakers are so beguiled by it. But when they focus on the artists at its core – one struggling to realize his vision and another gradually losing his – Our Time Machine tells a powerful, all too universal story. 80 min. Subtitles. Now available on digital and on demand. NNN (NW)

The 24th edition of Reel Asian offers a wide mixture of documentaries, features and shorts – many with accompanying panels and Q&As – along with a selection of workshops and artist talks. We made some recommendations here. To November 19 at reelasian.com

Shorts That Are Not Pants Film Festival

Ordinarily a weekend affair, this year’s online edition stretches out over 10 days – so you can finally watch everything in the program without getting whiplash. November 13 – 22 at shortsnotpants.com

The 15th annual celebration of cinema from the E.U. – screening one film from each member nation – moves online this year. We wrote about it here. November 13 – 29 at euffto.com

The Fireflies Are Gone (CBC Gem)

I Am Greta (Crave)

The Life Ahead (Netflix Canada)

The Minions Of Midas (Netflix Canada)

A Rainy Day In New York 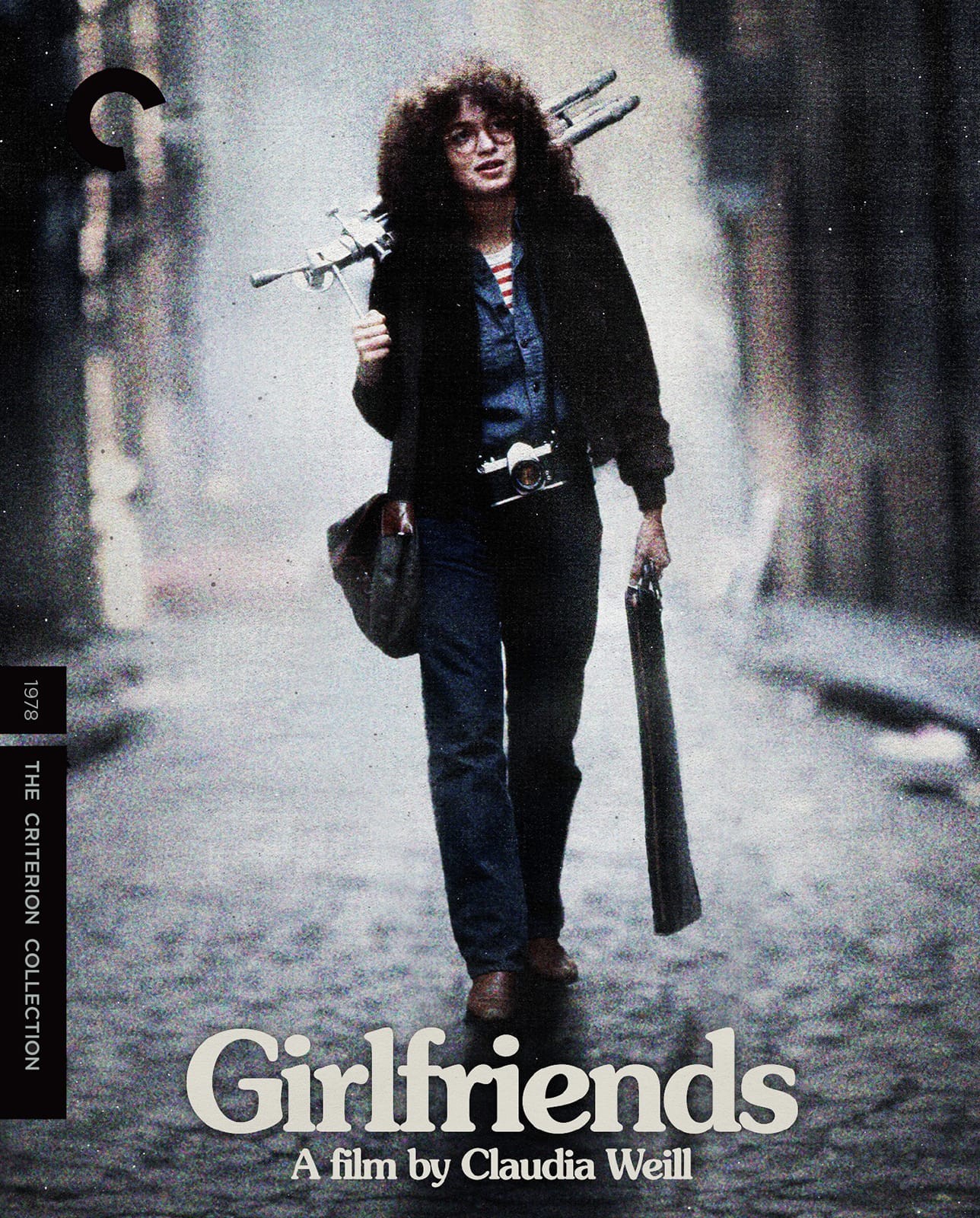 Nicole Holofcener’s Walking And Talking, Darren Star’s Sex And The City, Lena Dunham’s Girls – they all owe a debt to Claudia Weill’s 1978 indie, which starred Melanie Mayron as a young photographer who finds herself suddenly adrift in Manhattan when her best friend and roommate (Anita Skinner) gets engaged. It’s a charming, insightful relationship picture that now plays as a showcase for Mayron’s winning screen presence; the camera loves her, her timing is impeccable and she never crosses the tonal line that separates “relatably anxious” and “cloyingly neurotic.” Criterion’s excellent disc – built around a new 4K restoration of the feature – includes new interviews with Weill, Mayron and supporting players Christopher Guest and Bob Balaban, a new interview with screenwriter Vicki Polon, and a conversation between Weill and Transparent creator Joey Soloway – as well as two of Weill’s shorts from the early 70s: Commuters (co-directed with Eliot Noyes) and Joyce At 34 (co-directed with Joyce Chopra).