Including Thomas Vinterberg's Another Round, Adam Brody in The Kid Detective and the time-loop comedy Palm Springs 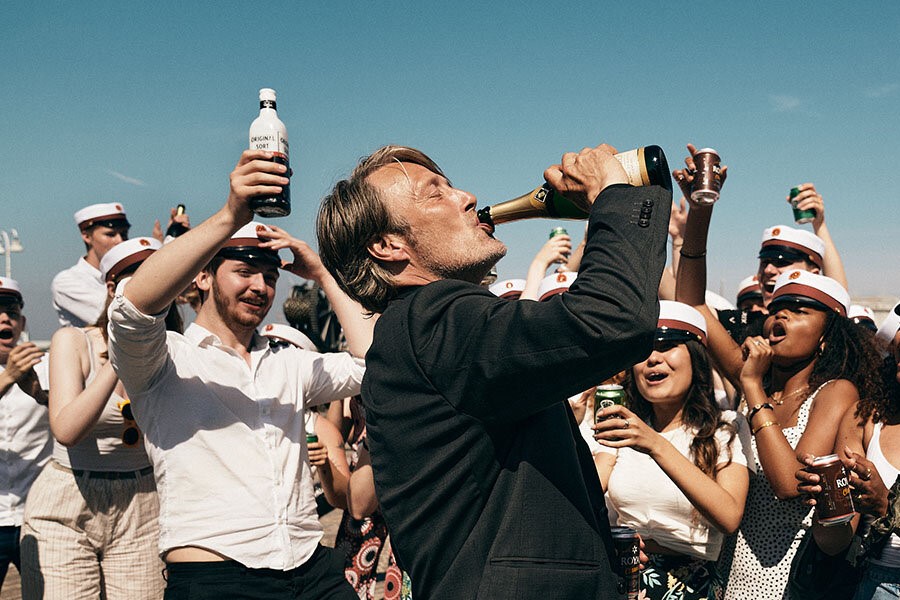 NOW critics pick what’s new to streaming and VOD for the weekend of December 18. Plus: Everything new to VOD and streaming platforms.

Director/co-writer Vinterberg’s latest reunites him with Mads Mikkelsen for a film slightly looser but no less unforgiving than their last collaboration, 2012’s The Hunt. Another Round casts Mikkelsen, Lars Ranthe, Magnus Millang and Vinterberg mainstay Thomas Bo Larsen as high-school teachers who embark on a radical experiment: would their careers and relationships be better if they maintained a minimum blood-alcohol level of 0.05? The answer may not surprise anyone, but the path to it is both very funny and very grim, with the quartet adapting to their state of constant inebriation with varying levels of success. Vinterberg is an old hand at spinning awkward human moments into explosive comedy or soul-freezing dread, as the situation depends, and this story gives him the opportunity to do a little of both. Similarly Mikkelsen finds a way to play both the liberation and misery of a never-ending drunk, turning down his quicksilver charisma to blend into the ensemble – until it all comes pouring out of him in a brilliant, and brilliantly ambiguous, final dance number. You’ll see. 117 min. Subtitled. Available on digital and on demand Friday, December 18. NNNN (Norman Wilner)

Writer/director Morgan’s genuinely weird character study – with Adam Brody as an embittered former small-town prodigy out to prove himself by solving a murder – was an unexpected entry on TIFF’s Canada’s Top Ten for 2020. It’s a very strange film, playing like a custody battle between Wes Anderson and David Lynch as Brody’s deeply broken Abe Applebaum slouches through life drinking and fighting, until a teenager (Sophie Nélisse) hires him to prove her boyfriend’s death wasn’t an overdose. Morgan, who co-wrote, co-produced and co-edited The Dirties with Matt Johnson, is fascinated by the idea of a grown-up Encyclopedia Brown forced to confront the limits of his childhood genius. And Brody – who, two decades after The O.C., knows something about adolescent success himself – finds an endless number of tragic notes in the character of Abe, still in denial over a past tragedy he wasn’t equipped to solve. (Peter MacNeill and Maurice Dean Wint are appropriately conflicted as authority figures to whom Abe turns for help over the course of the mystery.) And though The Kid Detective’s spell is ultimately shattered by a last-minute turn into an ugliness it simply can’t accommodate, I haven’t stopped thinking about it. Maybe that’s the point. 100 min. Available on digital and on demand. NNN (NW)

Palm Springs is a time-loop movie about a young woman named Sarah (Cristin Milioti) who gets stuck repeating the day of her sister’s wedding, over and over and over again. Worse, she’s stuck there with Nyles (Andy Samberg), who’s been trapped in the loop for so long that he’s resigned to his fate. Nyles has no patience for Sarah’s existential horror; Sarah has no patience for Nyles’s over-it attitude. And the movie is a love story – a little gem of a romantic comedy, as well as a really clever variation on the Groundhog Day genre. Palm Springs could have been a fun little diversion, but it grows into something so much more: a movie about relationships and commitment, and about growing with someone – and what it takes to choose to be a better person when the world doesn’t really care what you do. It’s also, rather remarkably, a film that speaks to the current moment better than almost any other. We’ve all had to come to terms with our own time loops this year, knowing that tomorrow will be exactly the same as yesterday and feeling powerless to change our trajectory. At least Nyles and Sarah have access to an open bar. Full review here. 90 min. Available to stream on Amazon Prime Video Friday, December 18. NNNN (NW)

Sister Of The Groom

The War With Grandpa

It’s not a holiday movie in any way, shape or form, but Arrow’s loving 30th anniversary release of Ron Underwood’s beloved creature feature still makes a wonderful present. This smart, sly salute to 50s monster movies stars Kevin Bacon and Fred Ward as handymen trying to survive an infestation of hungry sandworms in their tiny desert town, alongside Finn Carter’s resourceful seismology student and a handful of character actors (among them Michael Gross, Victor Wong, Reba McEntire and a pre-Jurassic Park Ariana Richards) having the time of their lives running away from giant rubber beasties. Never mind the endless stream of direct-to-video sequels, this is the only Tremors that matters – and Arrow’s new 4K restoration showcases the sun-blasted locations and appropriately dusty textures of the actors’ wardrobes, as well as making the giant Graboids feel as threatening and present as they did in the theatre.

And, in the limited edition 4K and Blu-ray sets, there’s a bonus disc of outtakes and additional interviews from Making Perfection, as well as three early short films from the Tremors creative team. Those sets also include lobby cards, a mini-poster and a downright charming illustration of Graboid anatomy by Matt Frank, all of which would make an absolutely delightful holiday gift for the nerd on your list. Or you can just buy it for yourself. Follow your heart.