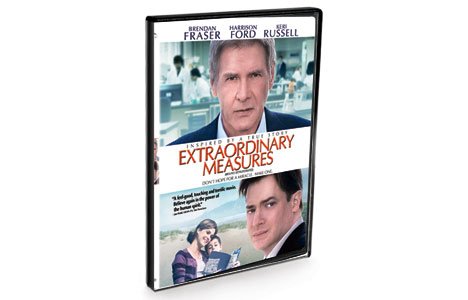 Sold as feel-good uplift, Extraordinary Measures has something more interesting to offer than suffering children and frantic parents. It’s a drama built around the problems of developing a drug and bringing it to market.

John Crowley’s (Brendan Fraser) two children have Pompe disease, a rare and fatal genetic disorder. Crowley finds Dr. Robert Stonehill (Harrison Ford), a Pompe researcher with a theoretical treatment, and together they go from fundraising to forming a company, finding venture capital and selling out to an established pharmaceutical company.

Robert Nelson Jacobs’s script makes the scientific and business exposition lucid and terse. Stonehill’s personality makes it dramatic. He’s embittered, hostile and dismissive of anything but pure science. He’s his own worst enemy.

It’s a new kind of role for Ford, and he digs right into it, never softening Stonehill’s misanthropy, even in the scenes where you’d expect him to. His performance does much to raise this film above disease-of-the-week level.

Best of the extras is an interview with the real Crowley, but overall they’re skimpy and not particularly informative or amusing.