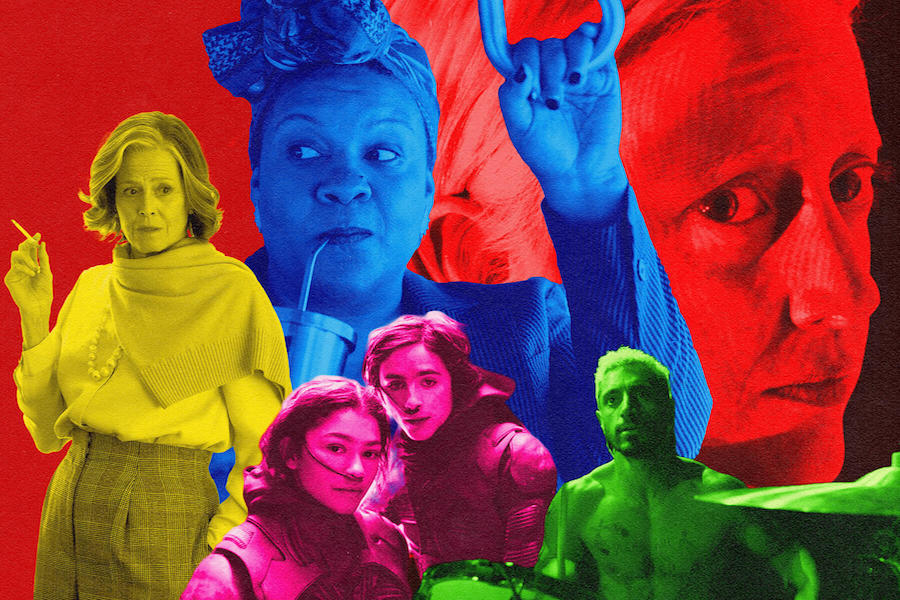 Writing about movies coming out this fall is tricky, since the last six months have shown us that release dates are extremely flexible concepts. Anything set for a megaplex run has to be marked with an asterisk, since who knows whether theatres will still be operating by Thanksgiving? But we have to soldier on. The streaming titles will definitely make it to your eyeballs. As for the others… well, let’s see.

The Boys In The Band

Produced by Ryan Murphy, this screen adaptation of Mart Crowley’s watershed stage play – about a group of gay men who get together for a birthday party that turns into a night of wrenching confessions – reunites the cast of the 2018 Broadway production. The cast includes Jim Parsons, Zachary Quinto, Matt Bomer, Andrew Rannells and Charlie Carver. Cinematographer Bill Pope’s credits include The Matrix and Scott Pilgrim Vs. The World, so don’t expect it to look too stagey. Netflix, September 30

Horror streaming service Shudder wastes no time getting its Halloween on with this Sundance meta-creeper starring Aya Cash and writer/director Josh Ruben as two horror writers trying out their material on one another in a secluded cabin, as you do. Anyone watching the current season of The Boys knows Cash can pivot from funny to scary and back again in the blink of an eye. Given that she plays the author of a zombie novel, we’re hoping for some fun shambling, too. Shudder, October 1

In Antiviral, Brandon Cronenberg imagined a near-future where people coveted celebrity diseases. His next project is even weirder, a body-swapping thriller with Andrea Riseborough as an assassin who uses advanced technology to inhabit strangers and use them as weapons. It’s all very practical (if more than a little monstrous), until her latest acquisition (Christopher Abbott) glitches out with her still inside. Jennifer Jason Leigh, Sean Bean, Kaniehtiio Horn, Rossif Sutherland and Deragh Campbell are along for the ride. Theatrical, October 2

Welcome To The Blumhouse

Amazon’s pickup deal with Blumhouse resulted in eight feature films, the first four of which – Black Box, The Lie, Evil Eye and Nocturne – are rolling out in time for the spooky season. We saw The Lie at TIFF a couple of years ago; hopefully the other entries are a little stronger. Elan and Rajeev Dassani’s Evil Eye, which stars Sarita Choudhury as a Delhi mother trying to save her daughter (GLOW’s Sunita Mani) from a supernatural threat in New Orleans, certainly sounds promising. Amazon Prime Video, October 6 and 13 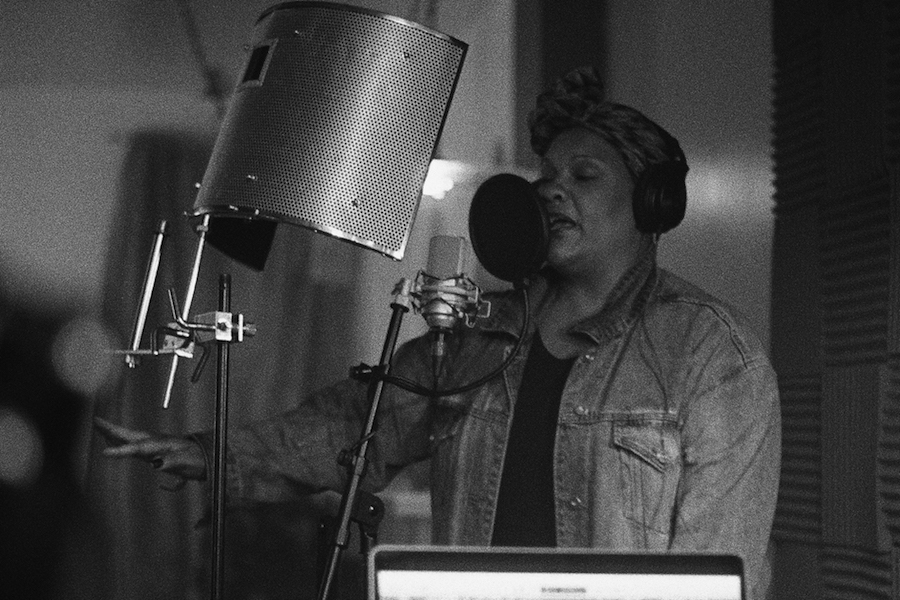 Radha Blank’s Netflix movie The 40-Year-Old Version could be a sleeper hit this season.

Writer/director/star Radha Blank won the directing award at Sundance for her breakout comedy, in which she plays a New York playwright facing middle age who turns to hip-hop to reactivate her creative juices – reinventing herself as wild-card rapper RadhaMUSprime – only to be met with a whole new set of compromises and disappointments. Shot in black-and-white (by Clemency cinematographer Eric Branco), this could be the sleeper of the season. Netflix, October 9

For two decades, Sibil Fox Richardson – known as Fox Rich – has spent her time raising six children and working to get her husband Rob out of the Louisiana prison where he’s serving a 60-year sentence for armed robbery. Garrett Bradley’s documentary tells their story, using nearly 20 years of home videos shot by Fox and her sons to illustrate the passage of time, and the toll Rob’s sentence takes on the whole family. Winner of the U.S. documentary directing award at Sundance earlier in January, this one’s is expected to be a major awards contender. Amazon Prime Video, October 16

This year’s TIFF opener finds Spike Lee taking Byrne’s recent Broadway show – a gently political jukebox musical that reshuffles four decades of the ex-Talking Heads frontman’s music into a new narrative about despair and compassion in today’s America – and turning it into stirring, thrilling cinema. The music is great. The musicians are amazing, marching and swirling around the stage to Annie-B Parson’s geometrical choreography. Road To Nowhere has always demanded a drumline; it just took Byrne 30 years to figure it out. Crave, October 17

Daphne Du Maurier’s Gothic tale of a young bride who discovers her new husband is still haunted by the memory of his first wife has already been adapted for the screen, rather successfully, by Alfred Hitchcock in 1940. Now, Lily James and Armie Hammer step into the roles originally played by Joan Fontaine and Laurence Olivier for a new production directed by Ben Wheatley of High Rise and Free Fire. It looks gorgeous. We’re intrigued. Netflix, October 21

Death On The Nile

Kenneth Branagh’s self-aware update of Agatha Christie’s Murder On The Orient Express was successful enough to merit another all-star celebration of elaborate fashion and even more elaborate moustaches, this one set in Egypt and featuring Annette Bening, Russell Brand, Gal Gadot, Armie Hammer, Rose Leslie, Sophie Okonedo and Letitia Wright – as well as Dawn French and Jennifer Saunders – as various suspects and irritants to Branagh’s Hercule Poirot. Whether it actually opens in theatres or winds up on Disney+ is up to the fates, and our COVID case numbers. Theatrical, October 23 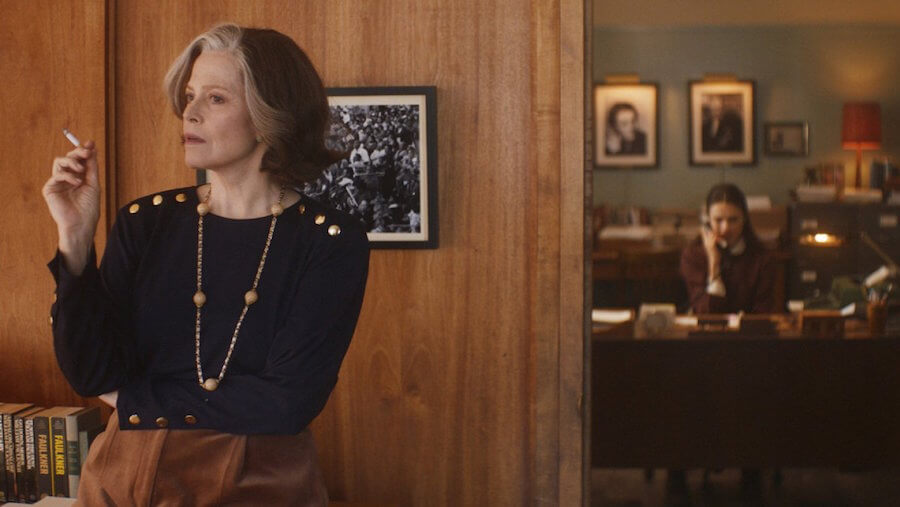 Once Upon A Time … In Hollywood’s breakout star Margaret Qualley takes the lead in Philippe Falardeau’s adaptation of Joanna Rakoff’s memoir of New York literary life in the 90s, when she worked for J.D. Salinger’s agent answering the reclusive author’s fan mail. Sigourney Weaver plays the agent; Douglas Booth and Théodore Pellerin turn up as young men in our hero’s orbit. And keep an eye out for Colm Feore and Transplant’s Hamza Haq, who are there to remind us this movie was shot in Montreal. Theatrical, October 23

Parasite may have been Bong Joon-ho’s breakout picture, but the genre stylist has been making complex, playful interrogations of social mores and personal responsibility for a couple of decades… and none are better than this knotty 2003 thriller about the efforts to catch a serial killer preying on a small Korean village, which predates David Fincher’s similarly amorphous Zodiac by four full years. Long unavailable in North America, it’s returning to screens in a new 4K restoration that looks absolutely gorgeous, and those who only know Song Kang-ho from Parasite will be dazzled at the range he shows here. Theatrical and VOD, October

Look, we know the odds are slim that any major-studio movie will see the inside of a theatre this year. But we’re still hoping Marvel’s solo outing for Scarlett Johansson’s Russian dark-ops specialist – which was originally supposed to open last spring – gets a shot at finding an audience. Mostly we just want to see what this movie is, given that it’s a superhero movie directed by Australian minimalist Cate Shortland (Somersault, Lore) and written by Ned Benson (The Disappearance Of Eleanor Rigby), neither of whom seems like someone you’d expect to be making a superhero movie. So, fingers crossed we’ll be able to see it safely, and on the biggest screen possible. Moved to May 7, 2021

Speaking of giant franchise pictures that need massive global openings to justify their gargantuan budgets: the new James Bond movie also saw its spring opening cancelled by COVID, and is now banking on dominating the late-November box office. All we know so far is that Rami Malek is the villain, Daniel Craig’s Knives Out co-star Ana de Armas is on board as well, and both Fleabag’s Phoebe Waller-Bridge and director Cary Joji Fukunaga share screenplay credit, meaning this adventure’s likely to be a little more inventive than the hidebound Spectre. Moved to April 2, 2021 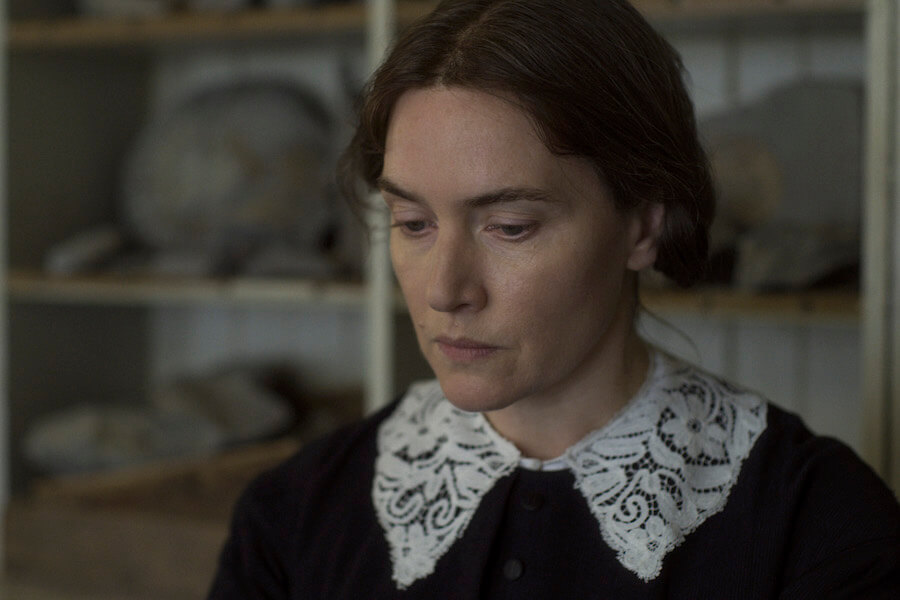 Though it bears a superficial resemblance to Céline Sciamma’s Portrait Of A Lady On Fire – another period piece about two women falling for one another in an unforgiving seaside location – Francis Lee’s Ammonite is really a mirror image of Lee’s remarkable first feature God’s Own Country. Kate Winslet and Saoirse Ronan playing out a story of unexpected passion on the rocky beaches of 19th century Dorset. Yes, there’s nudity. But the raw emotion on display is much more powerful. Theatrical, November 20

Chloé Zhao’s film about the end of the American dream – adapted from Jessica Bruder’s nonfiction book – stars Frances McDormand as a woman traveling the western states, chasing work and good weather and encountering a subculture of people of a certain age pursuing a life outside the norm. Featuring a cast of non-professional actors playing versions of themselves, this was one of the most talked-about titles at TIFF 2020, and rightly so: it might be the year’s best movie. Theatrical, December 4

It didn’t get a lot of buzz at TIFF, but those who saw the new animated feature from the Irish studio Cartoon Saloon – which produced Song Of The Sea, The Secret Of Kels and The Breadwinner – have been positively raving about Tomm Moore and Ross Stewart’s lyrical tale of a friendship between a young hunter (Honor Kneafsey) and a forest child (Eva Whittaker) who says she was raised by wolves. Keep an eye out for this one. Apple TV+, December

Snapped up by Amazon Studios at TIFF last year, Darius Marder’s directorial debut is built around a mesmerizing performance from Riz Ahmed as a heavy-metal drummer forced to re-evaluate his life and his career when he suddenly loses his hearing. Amazon Prime Video, December

An unassuming bank teller (Ryan Reynolds) discovers he’s a background character in a videogame, falls for a real-world player (Jodie Comer) and decides to take control of his existence in this effects-heavy action comedy, which could be the live-action mash-up of The LEGO Movie and Wreck-It Ralph Reynolds’s Deadpool fan base is looking for. Assuming, again, that theatres are still open to screen it. Theatrical, December 11 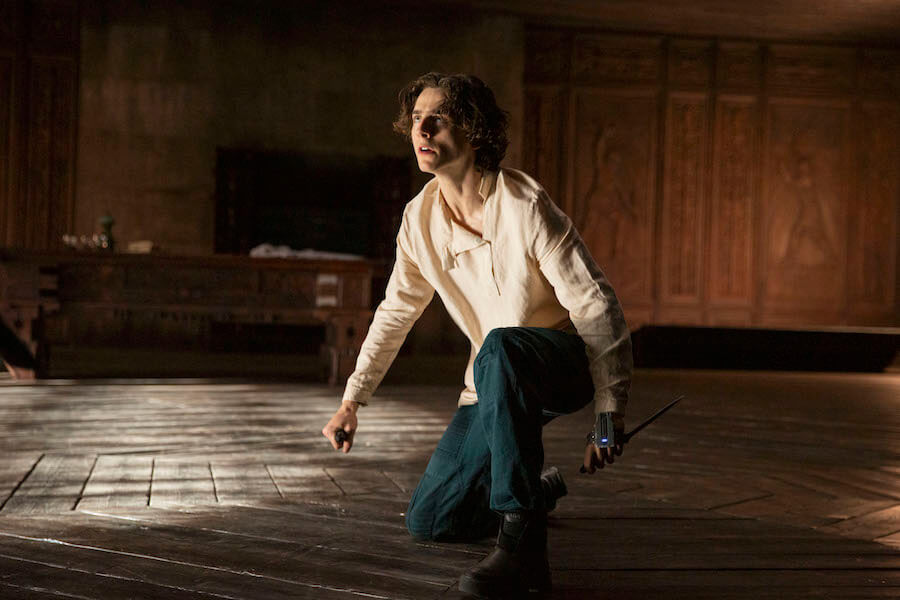 Denis Villeneuve’s gargantuan sci-fi epic is staking out the same release window claimed by David Lynch’s disastrous 1984 adaptation of the same Frank Herbert novel. Will this version – which stars Timothée Chalamet, Zendaya, Josh Brolin, Dave Bautista and Rebecca Ferguson – succeed where its predecessor failed, or will Villeneuve also be ground to dust by the density of the source text? And that’s assuming it even reaches theatres at all, of course. Theatrical, December 18