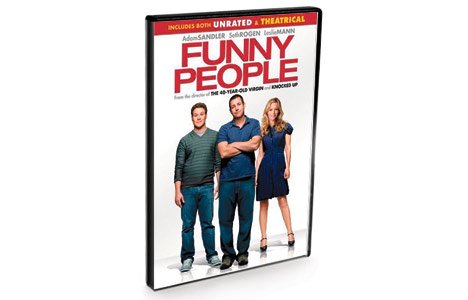 Funny People is not a comedy. People crack jokes constantly, and there’s a climactic moment that plays like farce, but most of the characters are creeps, the acting aims for dramatic realism, and the ending is bleak.

George is thoroughly despicable, simultaneously needy and rejecting. His endless stream of dick jokes plays as hostility, not humour. Ira’s two roommates, young comics having their first success, are little Georges-in-training. But occasionally, when they’re writing jokes, talking about their craft or performing, the comedians are transformed into engaging people. If writer/director Judd Apatow isn’t so hot for the artists, it’s clear he’s in love with the art.

Ira’s anti-sentimental education plays well for about an hour, then the drama grinds to a halt, and Apatow drags in George’s long-lost love (Leslie Mann). It feels like a desperate move.

On their commentary, Apatow, Sandler and Rogen, when not busy cracking each other up, make it clear that they think they’ve made a comedy. They’re more interesting when they talk about the craft of comedy and their shared history.