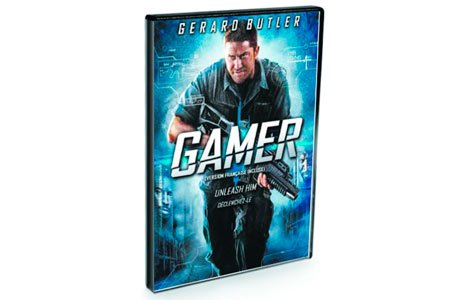 Mark Neveldine and Brian Taylor, the twisted monkeys behind Crank, are back with another excursion into hyperkinetic violence and splashy visuals. It isn’t quite as outrageous as Crank, because Gerard Butler, a thoroughly convincing action hero, doesn’t project the homicidal glee of Jason Statham, and because this is a more complex story.

Butler plays Kable, a convicted killer fighting for public entertainment – if he survives 30 battles, he goes free. The twist is that, thanks to nanotechnology, he’s merely an icon in a first-person shooter game being played by a teenage boy. Kable needs to escape and find his wife and daughter, but Castle, the billionaire genius behind the game, has other plans.

Michael C. Hall’s Castle is a great villain, at once charming and creepy, particularly in his song-and-dance number.

Gamer is filled with odd camera angles, flashy lighting and little witty touches. The three-part making-of doc has much to say about creating visuals in three distinct styles, Neveldine and Taylor’s “run and gun” approach to filmmaking and the editors’ contributions.