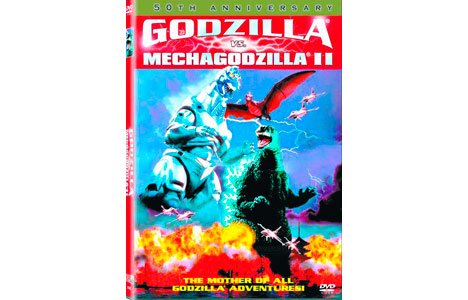 Never mind the II in the title. This is a Mechagodzilla prequel, not a sequel. That’s important, because it explains where the newly formed Contra-Godzilla Force gets the technology to build Mechagodzilla in the first place: it’s ripped off from the remains of semi-mecha Gidorah from the future (see Godzilla Vs. King Gidorah).

Meanwhile, scientists discover Rodan flying around and a pair of eggs on a volcanic island. They’re convinced that Rodan has hatched from one of the eggs, even though the other hatches a baby that’s the spitting image of Godzilla. From this, they conclude that a) the baby is not related to The Big G, and b) it is Rodan’s half-brother. Even by the standards of the Godzilla universe, this makes no sense at all.

Untroubled by such questions, Godzilla, Rodan and Mechagodzilla work at levelling Osaka and each other. It’s not the best action in the series, but far from the worst.

I’d have paid extra for an interview with the writer.