Hot Docs review: Summer Of Soul (… Or When The Revolution Could Not Be Televised) 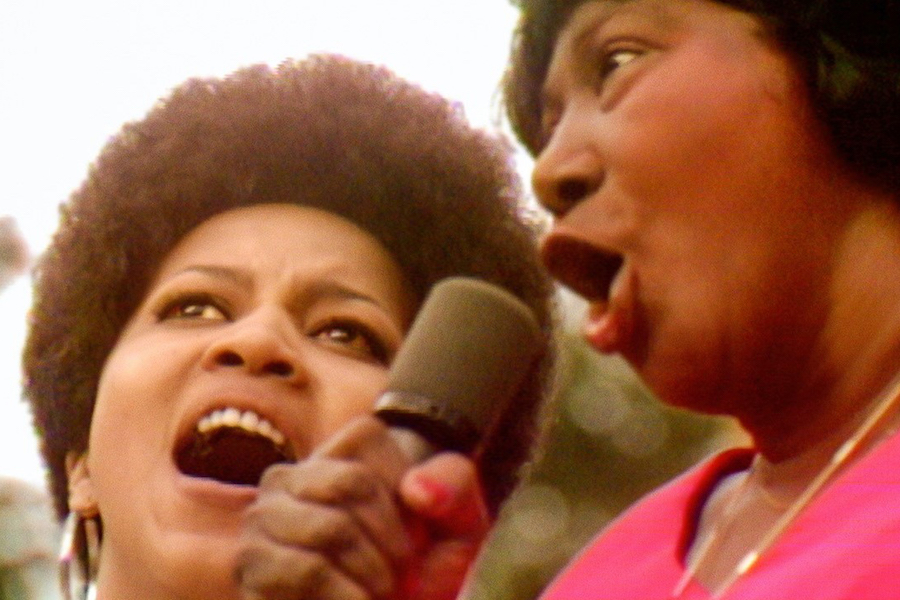 Mavis Staples (left) and Mahalia Jackson share the mic in a scene from Summer Of Soul.

SUMMER OF SOUL (…OR, WHEN THE REVOLUTION COULD NOT BE TELEVISED) (Ahmir “Questlove” Thompson). 117 Minutes. Rating: NNNNN

As a musician, podcaster and author, the Roots drummer and main man Ahmir “Questlove” Thompson has a way of taking the intricacies of musicianship or seemingly obscure behind-the-music stories and finding something profound. His Sundance Grand Jury Prize-winning documentary debut Summer Of Soul, about the 1969 Harlem Cultural Festival, essentially lets him do this at feature-length, resulting in a perfect equilibrium between stunning performance footage and insightful musical and social analysis.

If you’ve never heard of the Harlem Cultural Festival, you’re not alone. Eclipsed by Woodstock in the same year, the multi-weekend event featuring a stylistically diverse lineup of Black and Latin acts, including Nina Simone, Mahalia Jackson, Sly and the Family Stone, the Staple Singers, the Fifth Dimension, Stevie Wonder and so many more. It was started, we are told in the film, to keep Black people in Harlem from rioting during the political powder keg that was the summer of 69.

The free shows attracted 300,000 people but almost no media attention. The performances were professionally shot with a five-camera set-up by the late filmmaker and festival producer Hal Tulchin, but the footage languished in storage for 50 years thanks to disinterest in “the Black Woodstock” from film and TV buyers – hence Summer Of Soul’s subtitle.

In just under two hours, Thompson zooms both out and in, showing how the tense political climate, conceptions of Black identity and shifting social mores influenced the music and fashions of the era – and vice versa. Gospel moves into the secular realm, Black artists impact the pop world, groups start becoming racially diverse and jazz is increasingly influenced by Latin jazz (get ready for a deep-dive into Ray Barretto’s bongo technique – you can definitely tell a drummer directed this movie). And it was all happening on stage at the Harlem Cultural Festival.

What makes Summer Of Soul so compelling is that many of the attendees and artists interviewed are captured giving reactions to seeing the footage for the first time, so the talking heads tap a direct, emotionally charged pulse that is very much in line with not only the performances, but conversations around reclamation and Black identity and artistry today. This is an absolutely essential movie for music fans.

Available to stream on May 5 here.