O, I have fired photon torpedoes at Klingon warships at the edge of a dying star. I have rescued explorers from the depths of space while taking phaser fire. And I have picked up John Wick’s machine gun and shot a whole mess of goons in the face.

Okay, I didn’t actually do any of these things. But I played a couple of VR games that let me pretend. And technically I did it all in IMAX.

The notion of IMAX stamping its logo on tiny headset screens does seem a bit silly, but as it was explained to me at the press launch of the Scotiabank Theatre’s new IMAX VR Experience Centre, the IMAX brand is associated with “enveloping,  immersive experiences.” And yes, when you’re seated in a gaming pod with a headset, headphones and a haptic chair that thumps you in the back to convey the sensation of an explosion, you’re certainly immersed.

It also helps that IMAX enjoys a comfortable relationship with most Hollywood studios, thus giving them the inside track on properties like Warner’s DC cinematic universe, Paramount’s Star Trek franchise or Lionsgate’s John Wick. Stocking a megaplex’s arcade with VR games that extend (or simply replicate) the movies you’ve just watched was a no-brainer.

Located where the Scotiabank’s box office used to be, the gaming area is the first of its kind in Canada. (IMAX operates others in Los Angeles, London, New York and Shanghai.) The lobby area now holds 10 pods offering a selection of VR games prices range from $10 to $15, for experiences running between seven to 15 minutes in length.

You can play a solo run in the John Wick Chronicles – which, as I mentioned, allows you to shoot several dozen goons in the head on the rooftop patio of a lovely New York hotel, Keanu Reeves-style. I killed a helicopter. It was bracing.

You can join three other players for Star Trek: Bridge Crew, taking the role of captain, tactical, engineering or helm as your starship attempts a rescue that triggers a clash with hostile Klingons. (We died, but we died with honour.)

Other games include a Justice League experience that lets you play a solo mission as Batman, Wonder Woman, Aquaman, The Flash or Cyborg, each one scaled to the character – Batman drives the Batmobile, Aquaman fights an underwater monster, Flash must race against time – and adventures spun out of Star Wars and the latest iteration of The Mummy. 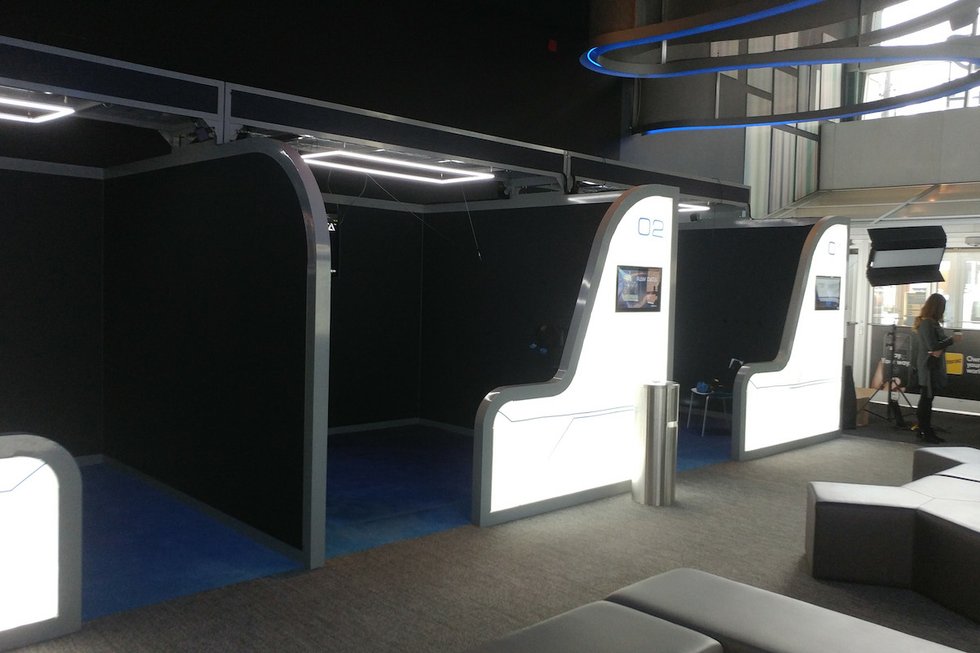 I’m cranky about most attempts to turn movies into theme-park rides – don’t get me started on that stupid 4DX gimmick – and I find most virtual-reality narratives too contrived to get into. But this is gaming, pure and simple: shoot the guy, save the people, stomp the monster.

Is it art? Not really. Is it IMAX? Nah. But it’s a lot of fun, and appealingly social in a way I didn’t expect. I didn’t know my three crewmates when we sat down to play the Star Trek game, but the program had us interacting chummily by the end, working as a team to save pods full of virtual scientists and even making a collective decision to sacrifice ourselves if it meant saving one more group.

And sure, if we’d thought about it a little longer we would have realized we were also dooming everyone we’d rescued, but I didn’t go to your fancy Starfleet Academy, okay?

Cineplex is positioning the Scotiabank’s IMAX VR centre as an add-on to the theatrical experience – did you enjoy Justice League? Why not smack some parademons around as Wonder Woman? – but I can see it working as stand-alone entertainment.

Waiting for someone to join you for a drink in the Entertainment District? Kill 10 minutes piloting a giant robot in the totally-not-Pacific Rim experience of Archangel!

Just make sure you play the game before the cocktails, rather than the other way around those headsets can really mess with your equilibrium, and the last thing you want to do is throw up on your teammates. Nobody needs things to get that real.