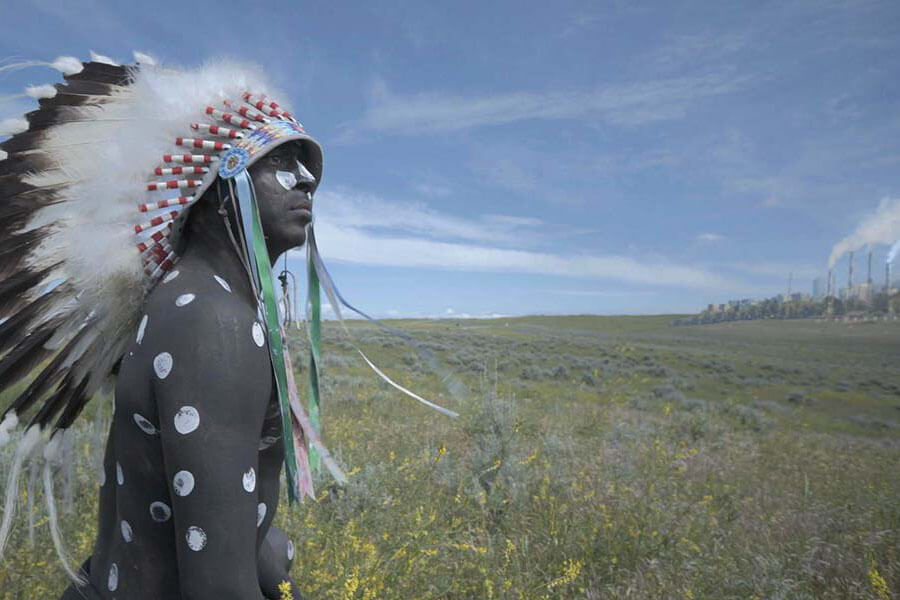 A scene from Inconvenient Indian

That’s why, following the recent controversy surrounding filmmaker Michelle Latimer, the ISO is making an effort to better define Indigenous identity – at least for the purposes of distributing funding and grants to Indigenous film and television talent.

“We know it is essential to ask people who they are and what [is] their Indigenous affiliation,” says Wente, in an email to NOW. “It’s more a question of how we get better at determining what those questions are and how they are asked, as well as how we communicate our expectations and build relationships of trust with the people we support at the ISO.”

Earlier this month, the ISO partnered with broadcaster APTN to launch the Indigenous Identity Consultation Process.

The ISO made a call for submissions while describing a phased process involving discussions with “elders, organizational stakeholders and leaders with knowledge and expertise in implementing strategies around vetting Indigenous identity.”

The end goal is to avoid the kind of confusion and pain that followed the recent debate around Latimer’s Indigenous identity.

The current standard for self-identification in Canada: ticking boxes on forms to indicate you are Indigenous. But Indigenous identity is much more complex than paperwork, thanks largely to government policies that have resulted in many people being cut off from communities.

“There are plenty of people who are Indigenous,” explains filmmaker Elle-Máijá Tailfeathers in a phone interview with NOW, “and are not connected to their community because of settler colonialism and everything that’s happened with residential school, the Sixties Scoop and the foster care system.

“Those people are on their journey to being reclaimed by their community and finding their roots. It’s not an easy conversation to have.”

A veteran filmmaker, Michelle Latimer rose to become one of the most well-known Indigenous-identifying figures within the industry, working with major funding bodies and broadcasters attempting to diversify production slates.

The filmmaker, who directed and produced the documentary Inconvenient Indian and primetime CBC series Trickster, appeared on the cover of NOW last fall discussing why having Indigenous authorship behind these stories was important. Both projects world premiered at the Toronto International Film Festival.

But since then, her identity faced scrutiny in a CBC report that cast doubt on her claims to having ancestry from the Kitigan Zibi community. Latimer apologized for publicly saying she is from Kitigan Zibi without having been claimed by that community or formally verifying a linkage.

Latimer said she genuinely believed she had a connection to the community, and that her Indigeneity claims are based on family oral history passed down from her grandfather.

In January, the CBC cancelled Trickster’s second season and also confirmed to NOW that Latimer also served the broadcaster with a notice of libel.

“It’s both exhausting and invigorating to see the direction that this conversation is taking,” says Tailfeathers, who wrote an op-ed in NOW describing the impact of the revelations. “There have been some really painful conversations that the Michelle Latimer controversy dredged up, but there’s also been a lot of generative work that is happening.”

The filmmaker, who co-directed The Body Remembers When The World Broke Open, says the ISO consultations are heartening.

Both Tailfeathers and Wente describe what’s ahead as an extremely nuanced and sensitive conversation about the difference between having Indigenous heritage and being Indigenous.

The Indigenous Screen Office was founded to be an advocate for the Indigenous film community that could also hold larger funding bodies and institutions to account, says Tailfeathers. She is assured by the ISO’s rigorous approach to defining identity, which involves elders and community leaders and a diversity of voices and lived experiences.

“We recognize that there are going to be different ideas on the table and support the sharing of these perspectives,” says Wente. “Ultimately, our goal will be to balance many perspectives to form policies in the context of the ISO and the people we serve.”

Wente says the ISO hopes to begin consultations in the spring and have new or refined policies in place before funding is distributed to artists in the fall.

The first phase of consultations with community leaders and industry bodies will include research into articles and reports that will inform a draft document. That will be taken to phase two, which is a broader community consultation, for feedback.

Tailfeathers says she plans to participate in the second phase, not just to contribute but also to listen.

“The process that they’re taking absolutely reflects those values of upholding Indigenous nationhood and respecting that different communities might have different protocols or ideas around who isn’t Indigenous and who belongs in their community.”

Others have proposed the Canadian government weigh in on authenticating identity claims.

At a press conference in January, Haida filmmaker Tamara Bell said Ottawa should introduce an “Indigenous Identity Act” that would legislate fines or jail time for people who falsely claim Indigenous identity for commercial benefit.

She pointed to American legislation passed in the 90s that makes it illegal to falsely advertise that arts and crafts are made by an Indigenous person. Bell’s proposition would involve criminalizing what she calls “pretendians.”

However, Tailfeathers is wary of allowing the government to decide and enforce who is and isn’t Indigenous.

“I don’t think that’s the best approach just given the history here in Canada,” she says, arguing that Canada did that in the past in using the Indian Act in an attempt to destroy Indigenous nationhood and harm communities, families and individuals.

“Nationhood recognizes that an Indigenous community should have autonomy over who belongs to that community,” Tailfeathers explains. “It’s up to individual Indigenous nations to decide. It’s not up to a government body that has literally stolen our land.”