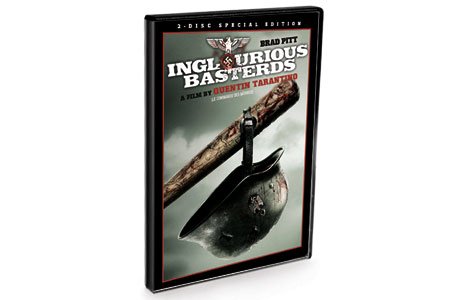 Time after time, Inglourious Basterds stops dead so writer/director Quentin Tarantino can milk his irrelevant dialogue trick, drag in pointless scenes and, in one case, an entirely unnecessary character. Eventually, everything congeals to a Grand Guignol climax that could have had a powerful emotional kick if there had been a half-decent buildup. Alas, there wasn’t.

The titular Basterds are a gang of Jewish-American soldiers dropped into occupied France to kill Nazis and spread terror. After a couple of scenes of the Basterds at work, the story shifts to a young Jewish woman passing as Aryan in Paris. Top-ranking Nazis are about to gather in her little cinema to see a film premiere.

The cast appears to be having fun, especially Christoph Waltz, who takes an unusually playful approach to his SS interrogator.

The extras are better than the movie. There’s a complete version of the film that the Nazis watch and a mockumentary making-of to go with it. Critic Elvis Mitchell provides a good film history lesson via a guided tour of the movie posters on display in Inglourious Basterds. Every one is there for a purpose, he assures us. But he never says what it is. I wish he had.