TV review: Insecure Season 4 feels intimate like no other sitcom

“You know your life doesn’t have to be this messy, right? Sometimes I think you like that shit.”

In that one line, halfway through the Season 4 premiere, Molly (Yvonne Orji) sums up just about every up and down we’ve seen Issa (Issa Rae) go through in Insecure’s previous three seasons. While things don’t exactly get any less entangled for her this 10-episode season, it does finally see her and the cast realizing things four long years after Kylie Jenner’s infamous prophecy. That and its sunny L.A. setting make for a much-needed – though bittersweet, as social distancing continues – summer injection.

In the five episodes sent to critics, the series picks up right where it left off, with Issa working hard on making her block party happen with new friend Condola (who, we found out by Season 3’s end, is dating Issa’s ex Lawrence) Molly is still navigating work drama and dating Andrew (Alexander Hodge), roommate of Nathan, who ghosted and then unghosted Issa and Tiffany (Amanda Seales) is still very pregnant.

In the rare position of being unattached, with the ever-tempting Daniel and Nathan out of the picture, Issa’s latest relationship conflict is with best friend Molly. It’s been brewing since the start, but finally comes to a head when the pair give up on repairing wounds that have long been building. Their go-tos are no longer each other Issa goes to her brother Ahmal (Jean Elie) and Molly goes to, well, no one.

Like their respective boyfriend problems, we’ve been here before. Insecure has a tendency to replay the same conflicts over and over again. But what works so well about this series – apart from how casually and consistently hilarious it is – is the way those aggravations play out so realistically. When Issa finds herself in the rare moment of confiding in Ahmal after a dysfunctional Thanksgiving family moment, there’s a sweet intimacy that hangs around them as they sit in her car together.

It’s there when Molly pushes Andrew to open up and get closer to her, and when Lawrence asks Condola if she really wants a relationship or something casual. Sure, they are moments we’ve seen play out on just about every show following 20- and 30-somethings. But here, as a kind of series of snapshots, there’s no beating around the bush, only action and reaction. Naturally, for each of the characters, that means a lot of brash behaviour and endless levels of petty. It also means electric screaming matches, make-up sessions and cutting words that are remarkably satisfying to watch.

While there is still much of that this time around, some of the spaces between finally get filled in. Some of what starts to drive Issa and Molly apart is that each has a tendency to tell the other how she should be living her life. We saw it in Season 3 when Molly saw Nathan try to reunite with Issa but told him to leave, taking the choice out of her hands. We see it this season when Molly tries to curve her friends-with-benefits relationship with Andrew into something more, and Issa tells her, “It seems like you’re always finding a problem. Sometimes I’m like, do you wanna be happy? Aren’t you tired? Cause I’m tired for you.” 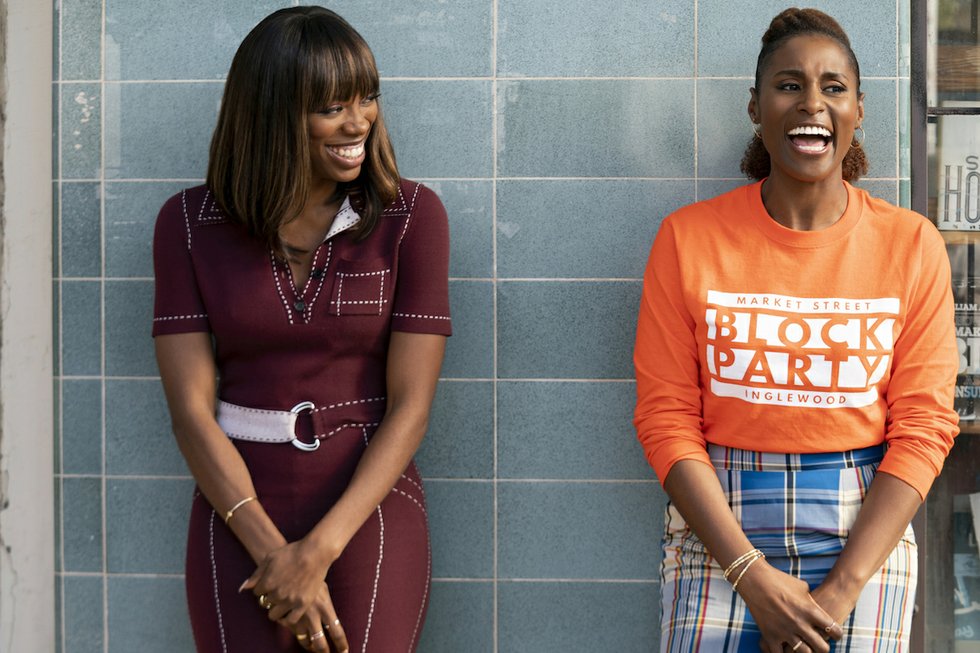 With the boys taking the back seat, in its fourth season, Insecure puts Yvonne Orji’s Molly (left) and Rae’s Issa to the test.

The thing is, we’re all tired, for all of these characters. And Issa’s not entirely wrong. But with these two already at a crossroads and in open judgment of each other’s choices, Molly is not about to take her friend’s advice. Instead, she carries on with Andrew, for better or worse. As her pattern goes, she has to find out for herself.

While Molly and Issa are unlikely to ever completely break up their friendship, it’s clear that, at least for a little while, they’re healthier apart.

In fact, by focusing on and finally using her skills – that charm! – Issa’s block party seems bound for success. It’s a far cry from her lazy efforts last year, when she barely seemed up to the task just having to fill in forms to get the right permits. Or the way she seemed to give in to every man’s whims, even if he literally screamed trouble. Season 4 Issa is someone else, someone far less exasperating, someone growing – an adult.

But it wouldn’t be Insecure if that evolution wasn’t facing any threats. Unlike Issa, Lawrence has a tough time accepting that his new love is friends with his ex. And when he starts to question that relationship and sees Issa thriving, he starts to miss her.

While it seemed she’d gotten him out of her system, at dinner with her brother in Episode 3, Issa lets slip that it’s hard for her to consider that when Lawrence was out of work and had lost confidence in himself, she was the one who helped him get back on his feet and propelled him into being the success he is now.

“I got the work in progress,” she says. “It took a lot of support and patience. I feel like she’s reaping all the benefits of his time with me.”

By episode’s end, as Mya’s Case Of The Ex tantalizingly plays (the soundtrack remains at the top of its game, emotionally manipulating away), Lawrence watches her Instagram story, sees how happy she is, and shoots her a text. The question isn’t whether Issa will let the parasite in, but if there’s even room left for him, new and improved as he may be.