Montreal-born actor gets a big break in Disney summer blockbuster Tomorrowland... but he can't talk much about the role 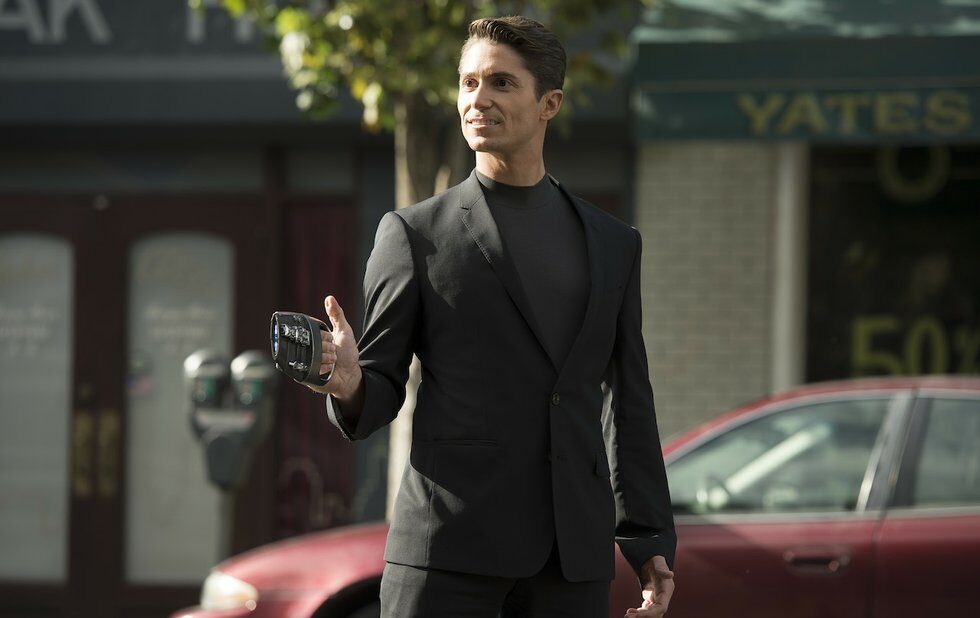 Matthew MacCaull doesn’t have a lot of screen time in Tomorrowland, but he makes the most of what he gets. The Montreal-born actor combines astute comic timing and a distinctive physicality to inhabit the role of Dave Clark, who turns up at key points in Brad Bird’s fantasy adventure to complicate the lives of plucky teen Casey Newton (Britt Robertson) and reclusive engineer Frank Walker (George Clooney).

To say anything else would be awfully spoilery, so let’s just get to the interview.

Without giving away anything important about your character or the movie, Dave Clark makes a pretty big impression in a small amount of screen time, huh?

Well, thank you so much! That’s definitely the early feedback. Given the size of the role, he is certainly very memorable, and the producer Jeffrey Chernov took me aside just before we walked into the premiere and sorta said, “Thank you so much.” He was proud of me because of who this character was and how well audiences were responding to him already. So I feel like I’ve done my job.

How long did it take to figure out your approach to the character?

It was definitely a collaborative effort. I did so much work on my own in terms of behaviour and the way he carries himself and the mannerisms, really trying to bring a stylized perspective to him. But the makeup and effects team on the film helped add that extra layer of style to who the character was. But certainly I put in easily two months of work before shooting, just working on the character and how he was going to behave.

Where did you start? How much did you know about Dave going into the audition?

During the audition process, I knew nothing other than the scene that I had for my audition, and who was involved, Brad Bird and [screenwriter] Damon Lindelof, and the title of the film. That’s all. But I just had this sense that there’s gotta be something more to this scene and to this character, given that Brad and Damon were involved – something more than just what appears on paper. So I started looking at fan sites, spoiler sites, trying to mine any little piece of information. And I came across a couple of really interesting things, like the original concept that Lindelof and Bird started from.

They found a box of Walt Disney’s effects, I think it was labelled “1957” or something, and that’s where the germ of this unique film came from – these interesting objects. It’s like a theatre exercise to take found objects and build a story around them. So I had that in mind, and I’m a big fan of theirs – especially of Lindelof. I’m a big fan of Lost and Prometheus and Star Trek [Into Darkness], and one of the things that occurred to me was that he often employs recurring themes in all of his movies, so I thought about the characters in these movies and the things that he likes to write about. I started coming up with a concept of who the character could be, so I made some creative choices and basically brought Dave Clark into the audition. What you see on screen is probably 90 to 95 per cent of what I brought into the audition.

So you… reverse-engineered him?

[laughs] I did! And it’s funny, too, because I was just speaking with April Webster and Alyssa Weisberg, the casting directors, a few days ago. We were chatting about that audition process, and I told them I had no idea who this character was before I went into the audition, and they couldn’t believe it. It had seemed to them that I must have known – somebody must have told me all about this character before going into the audition, because I was basically Dave Clark. I was told, when they watched the audition, they said “Well, there he is, there’s Dave Clark. That’s the guy we’re looking for.” Whereas it was basically just reverse-engineered based on my own desire to be in a film by these guys.

That’s kind of lovely, especially given how many of Bird’s films celebrate creativity and invention. This one certainly does.

There’s definitely a note of serendipity, but also the idea of working for your own future, so I think it was a bit of kismet that it all came together.

You’re in a giant Disney summer movie, which has to be good for future work.

Absolutely. I’ve been acting professionally for 15 years, and I’d say that I’m largely unknown [laughs]. My friends seem to think that this [role] is enough to get me more offers and get me known on a larger scale. I don’t disagree with that, but I’ve got a more pragmatic view of my work in this profession. Honestly, in this industry you’re somebody one day and nobody the next. If more work comes out of this as a result, that would be fantastic, [and] if nothing comes out of it, which is I guess the worst-case scenario, I just feel fortunate to have done this.

You’re also in a few episodes of iZombie, which just turned up on the streaming service Shomi in Canada.

My character’s name is Sebastian, and he is brought in toward the end of the season as somebody who ostensibly is there to help [main character] Liv in her journey to get some answers. He presents himself as a guy who’s empathetic to what she’s doing but is also a bit of a whistle-blower. He wants to do the right thing, and I think Liv can see that right away. So they form a bond, and try to start working together to sort of take down the people responsible for the zombies. As is the case with great drama, some twists and turns happen along the way I think the audience will respond greatly to what happens to not only my character but to Liv as well as a result of Sebastian entering the show.

Anything else coming up?

Last year I did Black Fly, an independent film that is a dark psychological thriller, and just found out about a month ago that we’ve been invited to the Cannes Film Festival for the Telefilm Perspective Canada series. Which is, I think, fantastic. It’s basically one of the few films that will be representing Canada at the Cannes Film Festival this year. I feel so fortunate about that – hopefully we’ll be able to make some sales and get the film in some theatres.