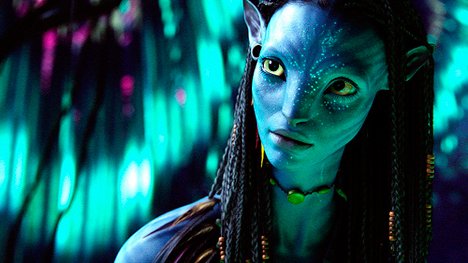 Because today is the day Cameron’s sci-fi action epic finally opens – the day that years of speculation about its box-office viability are finally silenced, the day the media stops talking about what it might be, and audiences buy their tickets and experience it themselves – in 2D, in 3D and in IMAX 3D.

It’s going to be an interesting weekend. Media organs who’ve invested in the Avatar phenomenon will be providing gross returns in real time via live crawls and Twitter feeds, weighing each new number against Titanic’s performance in the same frame 12 years ago.

Will the traditionally lower Sunday numbers be misinterpreted as a lack of enthusiasm from Cameron’s boosters? Or will the Sunday numbers be higher, with word-of-mouth driving the film towards unparalleled new levels of blockbuster smashery?

I’d like to pose a more salient question: Who cares? Aren’t we supposed to be talking about the movie, instead of its cross-platform merchandising potential and its paradigm-shattering out-of-the-box demographic appeal? (Please don’t take the last sentence seriously I was just throwing random buzzwords around.)

I’d love to hear people talking about the merits and flaws of the movie, rather than analyzing the marketing.

I think it’s got problems, but there’s no question that Cameron knows how to orchestrate thrilling, vivid action sequences – even if those sequences are built around a naïve mash-up of Dances With Wolves, The Lord Of The Rings and an extremely ill-chosen Iraq War metaphor.

Wouldn’t you rather get into that than discuss the worthiness of that Very Special Episode of Bones where a trio of supporting characters spent an entire subplot lining up for the premiere screening? Yes, I know one of them was played by Joel David Moore, who’s actually in Avatar, which makes it all clever and meta … for exactly three seconds.

It’s not news that the current state of pop-culture saturation dictates that all of the marketing crap surrounding a new piece of culture is considered essential to the experience of consuming that culture – hell, that’s why I’m writing these words. I just look forward to the day when Avatar can be discussed as a movie rather than a phenomenon, and take its rightful place in Cameron’s canon of ambitious action epics. It certainly belongs there, big blue cat warriors and all.[rssbreak]