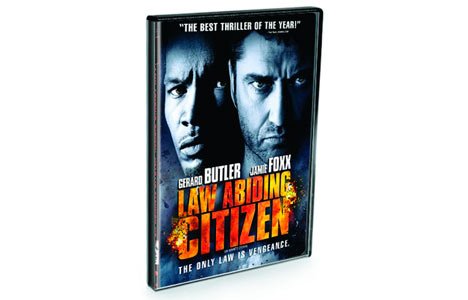 The best thing about Law Abiding Citizen is that it functions as the direct opposite of what its creators tell us they intended.

Jamie Foxx is supposed to be the good guy, but his public prosecutor is such a cold-blooded slime, interested only in his career, that he never fully gains our sympathy. Gerard Butler is supposed to be the bad guy, but he’s so clearly grief-stricken and traumatized by watching the murder of his wife and daughter and so justifiably enraged by the shoddy deal Foxx’s character cuts with the killer, that we never stop rooting for him, even when he declares war on the justice system and starts killing everyone connected with the case.

How he accomplishes those killings while locked in a cell takes up the bulk of the movie and is fairly entertaining.

There’s a doc in the extras that tries very hard to explain why Foxx’s initial plea bargain really isn’t sleazy. It does not convince.