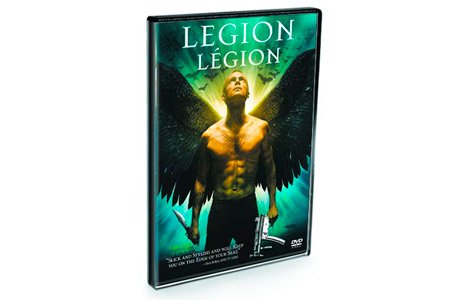 Nothing says spirituality like an angel with a big gun.

God has lost faith in humanity and sent his angelic army to extinguish us. Or possibly (the movie offers both explanations) they’re just here to slaughter a baby slated to be born on Christmas Day and described as the “hope of humanity.”

The angel Michael (Paul Bettany) rebels and heads for a run-down diner on the edge of the Mojave Desert where a young waiter (Adrianne Palicki) waits for the arrival of her unwanted child.

Logically, this casts both God and Michael in the image of Satan, which makes the movie either pure gibberish or seriously anti-Christian. Either way, it adds a pleasantly delirious edge to the proceedings.

The cast is fun, particularly Palicki and Dennis Quaid as the cranky diner owner, though Bettany’s gently sorrowful glances just before he unleashes the mayhem only get funnier as the movie progresses.

It’s hard to take angels fist fighting seriously, even for the sake of a cheap thrill, but the rabid granny and elongated ice cream man are chilling. The making-of doc provides a solid look at the effects wizardry.