Have you noticed how unsophisticated most movies are these days? How the editing of romantic comedies just cuts mechanically from. 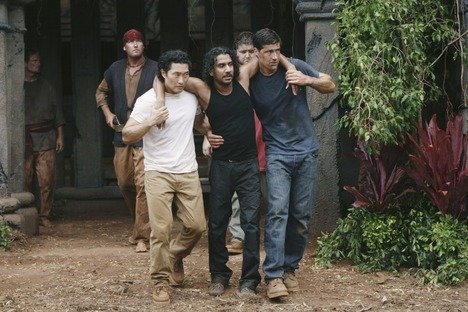 Have you noticed how unsophisticated most movies are these days? How the editing of romantic comedies just cuts mechanically from one mid-shot to the next, or how dramas are now built on the most basic of story concepts?

There’s a reason for that. All the sophistication is on television.[rssbreak]

The last decade has seen spectacular advancement in long-form small-screen storytelling. When 24 revived the serial format in 2001, with its real-time storyline ending every episode on a breathless cliffhanger, its split-screen aesthetic also ushered in a level of visual complexity that demanded the viewer’s full attention. It’s probably not a coincidence that 24 arrived just as television got wider – and more cinematic – with the advent of HDTV.

24 wasn’t the only show redefining the dramatic landscape. In subsequent years, David Simon developed the ambiguous investigations of Homicide: Life On The Street into the city-as-organism complexity of The Wire. Ronald D. Moore and David Eick took the cheesy 1970s property Battlestar Galactica and gave it thrilling relevance as a barely disguised allegory about America in the age of terror.

Friday Night Lights deconstructs sports-movie archetypes in an unblinking look at the mechanics of high school football. Mad Men celebrates the retro style of 60s advertising culture while condemning the cold hearts that beat beneath those grey flannel suits.

Over in England, Ricky Gervais and Stephen Merchant reinvented the sitcom with the mockumentary structure of The Office. Not only were the characters aware of the camera crew, but they openly courted its attention – a tweak developed even further in the American version. Other shows have since adopted the mockumentary device – Parks And Recreation, Modern Family – and Better Off Ted allows its title character to address viewers directly. But after six years on the air, The Office and its cast have perfected their relationship with the omnipresent lens.

And then there’s Lost, which began its last season this month.

Lost is the best show on TV right now. Its endlessly shifting mysteries have allowed show runners Damon Lindelof and Carlton Cuse to shift genres from survival thriller to epic romance to time-travel adventure and now, finally, to an endgame playing out in two distinct but equally credible realities. And it won’t make a lick of sense unless you’ve been following it from the very first episode.

That’s because Lost demands something from the viewer that few other shows ever have – active engagement.

To understand it, you have to understand your place in it whether you’re watching a flashback or a flash-forward, and how the story within that sequence informs the action in the master narrative. And since you’re (hopefully) invested in the characters, it never feels like work the show’s best episodes feel like thrilling new discoveries.

Compare that to the declarative banality of a movie like The Blind Side, which moves its stick-figure stereotypes around in circles until the music swells and we all learn an important lesson about how poor black folks need to do whatever rich white people tell them. Or the well-meaning inanity of The Lovely Bones, where we discover that if you’re raped and murdered, you get to go to Narnia. Or the simplistic dilemma facing Meryl Streep in It’s Complicated – lusty ex Alec Baldwin or kind-hearted prospect Steve Martin?

This isn’t to suggest that there isn’t good stuff out there. It’s just that precious little of it is coming from the studios. If you’re looking for complex, challenging American narratives, turn on your television.