Does It's Complicated promote pot use? 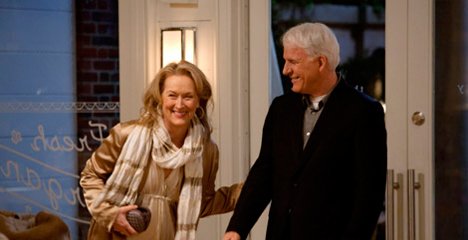 Streep and Martin high in a scene from It's Complicated

Is the (very) grown-up rom com It’s Complicated dangerous to children? The Motion Picture Association of America thinks so. It slapped the Nancy Meyers comedy with an R-rating, meaning that, if you’re under 17 you can’t get entry unless you’re accompanied by an adult.

The offending sequence features Meryl Streep and Steve Martin smoking a joint and having a little too much fun.

Seems that, if you want to feature drug use in a movie, you must show some negative consequences. In It’s Complicated, the only upshot of the pot consumption is a few too many giggles and a voracious appetite for a yummy chocolate cake.

I wondered what would happen if a 16 year-old tripped over that song on the radio, or downloaded it, or got access in any of the myriad ways they can. It strikes me as infinitely more problematic – if you’re worried about drug use among young people – than a scene in a movie geared for the boomer demographic. I mean, how many young teens are going to see It’s Complicated without their parents?

A New York Times commentary on the subject goes so far as to say that the It’s Complicated doobie scene would turn off teens to marijuana use. Who wanted to emulate a grey-haired geek like Steve Martin, anyway?

Turns out, there are some people who would.

My favourite holiday anecdote features friends of mine smoking a joint on the sidewalk in the Entertainment District. An Eastern European woman in her mid-60s approached them and said, “I’ve just seen It’s Complicated and I can’t stop thinking about what it would be like to smoke some marijuana. Do you mind if I have a puff?” My friends obliged, “of course.”

So, yeah, Meryl Streep’s new movie promotes pot use – just not to the demographic all those ratings fixers think.[rssbreak]