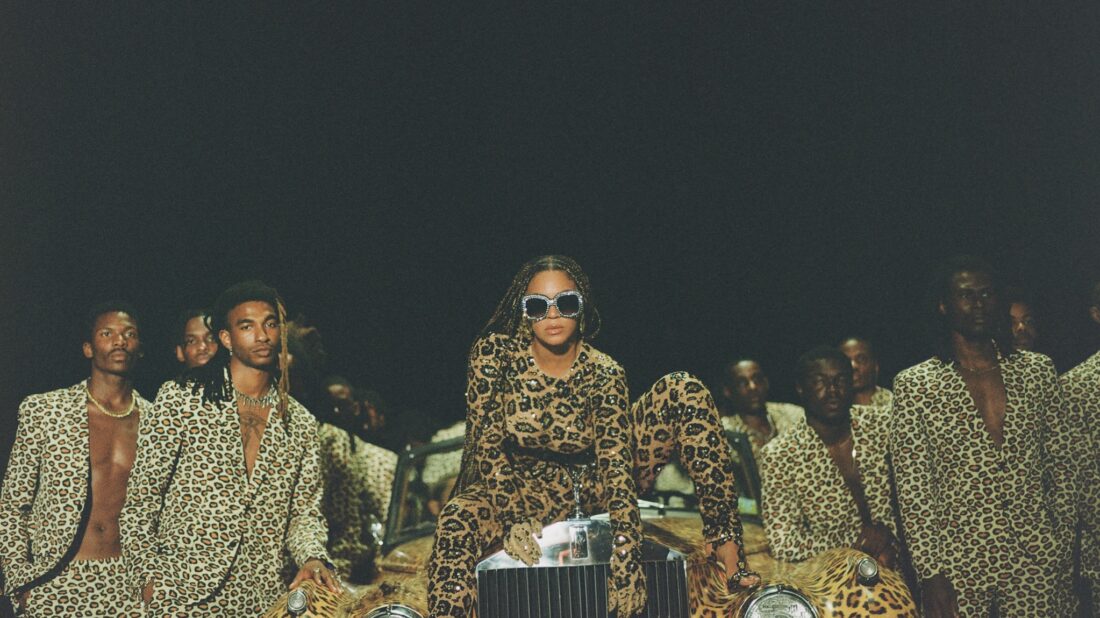 Some of the looks in Black Is King, a visual album by Beyoncé, will feel familiar to fans of the Netflix movie The Burial Of Kojo.

Blitz Bazawule’s 2018 debut feature is about a young family whose bonds are tested amidst the harsh sociopolitical climate in Ghana, where foreign mining companies extract resources and exploit labour. Bazawule captures heartache with magic realist elements and a striking aesthetic – film grain, red and blue tints and fiery skies. Kojo is heavily stylized, but the characters’ sense of purpose anchor the film’s beauty and lyricism.

Bazawule brought a similarly heightened and poetic look and feel to Beyoncé’s Black Is King, a visual companion piece to her The Lion King: The Gift soundtrack. Beyoncé recruited Bazawule, a former rapper who used to go by Blitz the Ambassador, to collaborate with a roster of global Black talents.

Naomi Campbell, Lupita Nyong’o and Beyoncé’s former Destiny’s Child groupmate Kelly Rowlands appear in the movie. Musical artists like Wizkid, Busiswa and Shatta Wale, who worked with Beyoncé on the soundtrack are also on hand. And Bazawule is among a team of directors that also includes Emmanuel Adjei, Jenn Nkiru and Kwasi Fordjour.

On top of directing the Don’t Jealous Me number, Bazawule developed Black Is King’s overarching narrative and tapestry. His loose retelling of Simba’s story – but with humans – is the connective tissue between the standout musical numbers.

Bazawule spoke to NOW about that process: being discovered by When They See Us director Ava DuVernay, whose distribution company Array put The Burial Of Kojo on Netflix; working with Beyoncé; Black Is King’s iconography; and developing a new Black cinema.

From Ava to Beyoncé‘s Black Is King

Ava DuVernay and Beyoncé are two pillars of the entertainment industry. Talk to me about this incredible journey you got to go on, from working with one icon to the other.

Without Ava, there would be no Beyoncé. When I made The Burial Of Kojo, I was rejected from every major film festival: from Sundance to TIFF.

You should understand why. Films that are made on the [African] continent are often made as co-productions with European companies. When it comes to the festival circuit, [the European companies] already paid for play. They’re already in there. As for the rest, there are a few slots here and there for the lucky ones. And I ended up not being one of those.

That’s cool because that’s how Ava came about. I showed it at a very small film festival in New York called Urbanworld. That’s where the buzz started. And Ava was like, “this gotta get to Netflix.”

Beyoncé saw The Burial Of Kojo on Netflix. And that became, “Blitz, I’m working on this project. Come meet.”

I walked into the office and saw Beyoncé in the lobby. I was about to introduce myself. She just gives me a big hug. I’m like, “Boom, if nothing else happens, Beyoncé hugged me. I’m cool for the rest of my life.”

In the Don’t Jealous Me segment, you put a giant-ass snake on Beyoncé.

Yo, to be honest, Beyoncé is brave. That snake had the whole set shook. And she was like: “I’ma sit on this bike. I’ma hold this snake. Lets go.” And that snake is hefty. It is heavy.

But again, it was just how she was consistently. We worked under the some of the harshest circumstances. There were incredible gusty winds, heat waves, but the goal was the same. We’re still going to pursue excellence, irrespective.

One of the big differences between Beyoncé’s previous visual album Lemonade and Black Is King is that the former feels like it comes from a personal and intimate experience. Black Is King comes from a Disney movie. Was it limiting to adapt The Lion King story?

We’re working within a space that people already know. But then we can lean into things that they don’t know, which for me was incredibly important. Our conversations [with Beyoncé] was about how do we elevate this piece – beyond the physical, for instance.

She knows my magical realist work. She knows what I could bring. One of my biggest suggestions was elevating this whole piece to the celestial and the cosmos. We lean into a specific culture: the Dogon tribe. You see the masked guy driving the crazy car?

For 5,000 years before telescopes were made, the Dogon tribe already charted incredibly complex constellations. This is all documented. I didn’t find out about this until I was 25-years-old. That imagery is now elevated into popular culture lexicon.

You mentioned the crazy car: a leopard-skin Rolls Royce. Let’s talk about that. We’re talking about an emblem of British wealth and power. The Rolls Royce Company was also a defense contractor. And then you wrap it in leopard skin.

A lot of what’s going on in that film is upending. We also have to recognize the world we’re in. Most images in this project were about how you take symbols and turn them on their head. Some of them are in clear opposition and some of them are subtle: “Let’s flip this thing and see what that looks like.”

Another example is the Ponte tower in Johannesberg where we shot the levitation. That used to be the symbol and bastion of the South African apartheid era. This is where our guy is going to levitate out of. Let’s figure out how we use these things that already exist, lean into them more and say: “We can give definition to all these things and upend what they mean.”

The Rolls Royce was one of our best ideas, I feel. We’re talking about a kid living his Hakuna Matata moment. We have the Dogon guide driving it wherever you tell your spirit guide to take you. If you ask them for good, they’ll give you good; if you ask them for bad… well, there you go. If we peel off that leopard, it’s still that oppression that has wreaked havoc on the world.

We can talk for days about the symbolism of that piece. But overall, our goal was really just to create imagery that would have people ask questions.

I look at this piece compared to The Burial Of Kojo. In Kojo, the relationship to material wealth is much more antagonistic. The gold, the miners and the dealers are the oppressor. But in Black Is King, it’s not as clear. There’s wealth everywhere. Even the beautiful art and costumes are really expensive.

To be 100, I feel like that’s what good art is supposed to do. It’s supposed to have us all step back and be like: “What the hell did I just watch? How can I form my interpretation of this?”

Let’s also talk about the party hearse that adult Simba is in. On one level, symbolically, it’s a freaking hearse. On another level, it’s like: “Shit, looks good. I will ride in that hearse.”

We’re so early in the canon of creating Black imaginative cinema. That’s what makes something like Black Is King so incredibly important.

Let’s go back to The Burial Of Kojo. I would argue that it was the first time most people have watched an inward-gazing African film. If you missed the Ousmane Sembènes of the world then this is probably your first foray into anything that is clearly inward gazing. I’m also cognizant enough to know that we’re so early in that canon of creating these motifs, it’s going to take hundreds of Burial Of Kojos and Black Is Kings for us to start to even unpack and say, “Oh, I get what that’s about.”

And it’s not just me. It’s the Jenn Nkirus, Bradford Youngs, Kahlil Josephs and Terence Nances – cats that are just now leaning into this stuff that we never had the budgets to do.

Beyoncé was just like, “guys take this and run.”And run we did.

This interview has been condensed and edited for clarity.