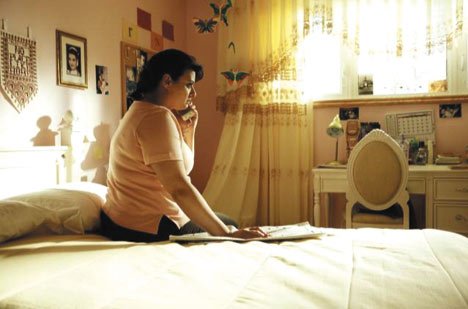 At this year’s TIFF, 50 artists and activists including Naomi Klein and David Byrne protested the Tel Aviv spotlight with an open letter. Not to worry. Hard on its heels is the Toronto Palestine Film Festival (TPFF), founded last year in memory of the 60th anniversary of the expulsion of the Palestinians in 1948.

It’s the semi-autobiographical story of a Palestinian mother and her teen son who emigrate from the West Bank to live with relatives in Illinois. Muna Farah (stage actor/director Nisreen Faour) is leaving a failed marriage, a fractious mother and brutal checkpoints. Her son, Fadi (Melkar Muallem), is looking forward to an education and opportunity.

The beautiful Faour projects a naive and tender ferocity, Muallem a wry innocence as they negotiate post-9/11 America.

“You killed my brother,” accuses a boy in school, the brother of a soldier killed in Iraq. Fadi is baffled.

But the strength of this human dramedy is that Dabis neither proselytizes nor dwells on the racism. Buoyed by skilled cinematography and a singular soundtrack, Amreeka is life-affirming and well told.

Screens Saturday (September 26) at the Bloor. See below for details of screenings go to tpff.ca for info about panels, a brunch at 93 Harbord and a Palestinian art show.